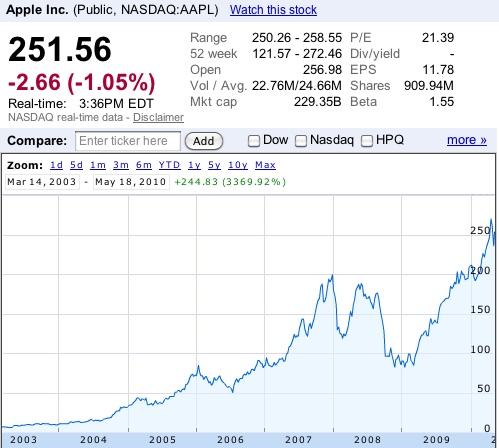 MarketWatch takes a look at "what might have been", examining Apple CEO Steve Jobs' decision to accept a March 2003 offer from the company to exchange his existing stock options for new ones at a more attractive price in comparison to the company's languishing stock price at that time, a move that would appear to have cost Jobs $10 billion in net worth at today's prices.

After the bursting of the tech bubble in early 2000, the Nasdaq Composite had plunged nearly 80% from its peak. Companies had folded left and right. Those left were staggering. Apple had fared as badly as any. Its stock had plummeted from a peak of $36 all the way down to about $7. (All prices have been adjusted for a subsequent stock split.)
Click to expand...

With Jobs holding multiple lots of stock options with exercise prices of $9.15 (15 million shares) and $21.80 (40 million shares), his stake in those options was worthless at that time beyond the potential for share price increases to push the options into positive territory in the future.

Jobs was not the only Apple employee in that position, however, and when the company offered employees the opportunity to cancel their existing options in exchange for a significantly smaller number of options at a lower price, Jobs and others took the offer.

He volunteered to cancel all his options in return for a far smaller number of shares, worth about $75 million at the time. The trade made sense -- unless Apple boomed again.

The shares Jobs received are worth $2.5 billion at today's stratospheric prices.
Click to expand...

Had Jobs held onto his original options, he would have seen them become profitable approximately a year and a half later and be worth $12.8 billion today. The difference means a missed opportunity of $10.3 billion for Jobs.

As the report notes, however, Jobs is of course not hurting for wealth, having been ranked the world's 136th richest person in Forbes' recent rankings. But the majority of Jobs' wealth comes from his holdings of Disney, where he became the company's largest individual shareholder after it purchased Pixar in 2006.

And there may have been another upside to Jobs' cancellation of his original stock options. A portion of those options, along with additional grants made to other Apple executives, was the focus of a backdating scandal, which resulted in an investigation by the U.S. Securities and Exchange Commission and the departure of former Chief Financial Officer Fred Anderson from Apple's Board of Directors and General Counsel Nancy Heinen from the company.

I wouldn't say Jobs' cares so much, honestly, unless he is most greedy person in the world, he should be happy with his couple billion
Comment
M

If I were Jobs I would blow a Billion to feel a little better.
Comment

Wow, with the unemployment rate so high, we could have used all those 10.3 billion jobs.
Comment
M

'Analysis' like the above is just stupid. We could ALL look back with hindsight and say we all lost an opportunity to buy Apple at $7 (or any other long running stock). Hindsight is always 20/20. Who knows, maybe Jobs doing that swap inspired his employees to get Apple out of the doldrums and on the almost decade long march they have been on.
Comment

I don't think it affects him much...he already has a lot of money!
Comment
T

Only if we knew!

Since options have expiration dates, the "old" options would have more likely evaporated completely anyway. They probably took the hit so they would at least have some gold at the end of the rainbow. So, not sure what the big news really is here.
Comment
H

My goodness, money should mean nothing to Steve, and, for that matter, to many of us... when you die, the person who has the most money.... WINS! I could have moved some retirement into AAPL when it was 80 ... but I didn't know I had access to the money! well, who cares? forgoodnesssake I'm 70. I'll die soon. Who cares? Money, shmoney! Let's party!
Comment
J

Get you hands offa my stack

A billion here, a billion there, soon we are talking about REAL money!!
Comment

It must be nice to have such problems.
Comment
V

mdatwood said:
'Analysis' like the above is just stupid. We could ALL look back with hindsight and say we all lost an opportunity to buy Apple at $7 (or any other long running stock). Hindsight is always 20/20. Who knows, maybe Jobs doing that swap inspired his employees to get Apple out of the doldrums and on the almost decade long march they have been on.
Click to expand...

I only wish I could have bought more. Too late now, and I'm not likely to be able to go back any time soon to get more.
Comment
Q

Who cares. Risk is something that should be quantified with a monetary value. Steve Jobs and the other execs that made this decision were doing something that has been echoed throughout their rise to the top. Conservative business dealings (as conservative as can be in the consumer electronic industry) while still taking necessary risk on talent and products. "What if" bugs me. There's no such thing as a time machine, Mcfly. What's done is done, and what's done cannot be made undone.
Comment

That's nothing. If he'd have just put his money into Microsoft, instead of all his money AND his time (which, when you figure what that's worth...) into Apple, he'd be a LOT better off. What a fool.