AirPlay does not see Smart TV

Hello everyone!
I have an issue with Airplay on my macOS High Sierra (10.13.6). I want to connect my Macbook Pro (Early 2011) to LG smart TV (UM7100PLB) which has compatibility with Airplay 2. However, after clicking the mirroring icon in the menu bar, it says either

.
I have tried numerous tips which I found on Apple support and other sites:
I have also tried it with macOS Sierra before I have learned that AirPlay 2 support was added in High Sierra (10.13.6). So I thought the problem might be because Sierra does not support AirPlay 2, so it cannot work with AirPlay 2 compatible TV (?).

Does wi-fi router have also be compatable with AirPlay 2?

On Apple's support page regarding Airplay issues, it says that macOS also should be updated to Mojave 10.14.5 or later to play AirPlay 2 videos. It seems strange to me as AirPlay 2 features where added in 10.13.6 macOS version, already. Either way, I cannot update my macOS to Mojave since High Sierra is the newest version that can run on MacBook Pro early 2011.

Does anyone know if there is any possiblity to make AirPlay feature work with my current hardware? Any advice is appreciated. Thanks.

Does it work from your iPhone/iPad on the same network? LG is uptodate?
Comment

At the moment I do not have iPhone or iPad to try.
Yes, LG is updated.
Comment
B

Just a data point: I've got a 15" Early 2011 MacBook Pro running High Sierra, and I am able to use AirPlay to my Apple TV boxes (one 4th-gen and one 5th-gen). I assume it's using Airplay 2, though I don't know how to tell.

Seems like it might be something to do with the LG TV. (I also have an LG TV but it's a 2016 model with no Airplay support that I know of).


Gargars said:
Does wi-fi router have also be compatable with AirPlay 2?
Click to expand...

No, I am sure that is not the problem.
Comment
B

Gargars said:
At the moment I do not have iPhone or iPad to try.
Click to expand...

Thanks for the replay, Brian33. Your information rely helps. At least we know it is not related to macs or routers firmware/hardware. Although I am pretty sure my LG supports Airplay 2, ant also there is a info on it how to connect devices via airplay, and it displays Airplay version.
So the best option at the time I believe is like you said to check if it works with other apple devices. Thanks.
Reactions: Brian33
Comment
B

It seems to me that it is MBP problem, because I tried connecting with iPhone to that TV and it worked just fine.
Comment
L

Gargars said:
It seems to me that it is MBP problem, because I tried connecting with iPhone to that TV and it worked just fine.
Click to expand...

Well, after my research I didn't find anywhere that High Sierra or MBP2011 does not support Airplay2. Ether way, when I go to about airplay section on LG it shows ether 25.06, or 14.7.0. It appears that by clicking on version tab I can choose between those two versions (photos attached). But MBP does not see LG no matter which version I select. 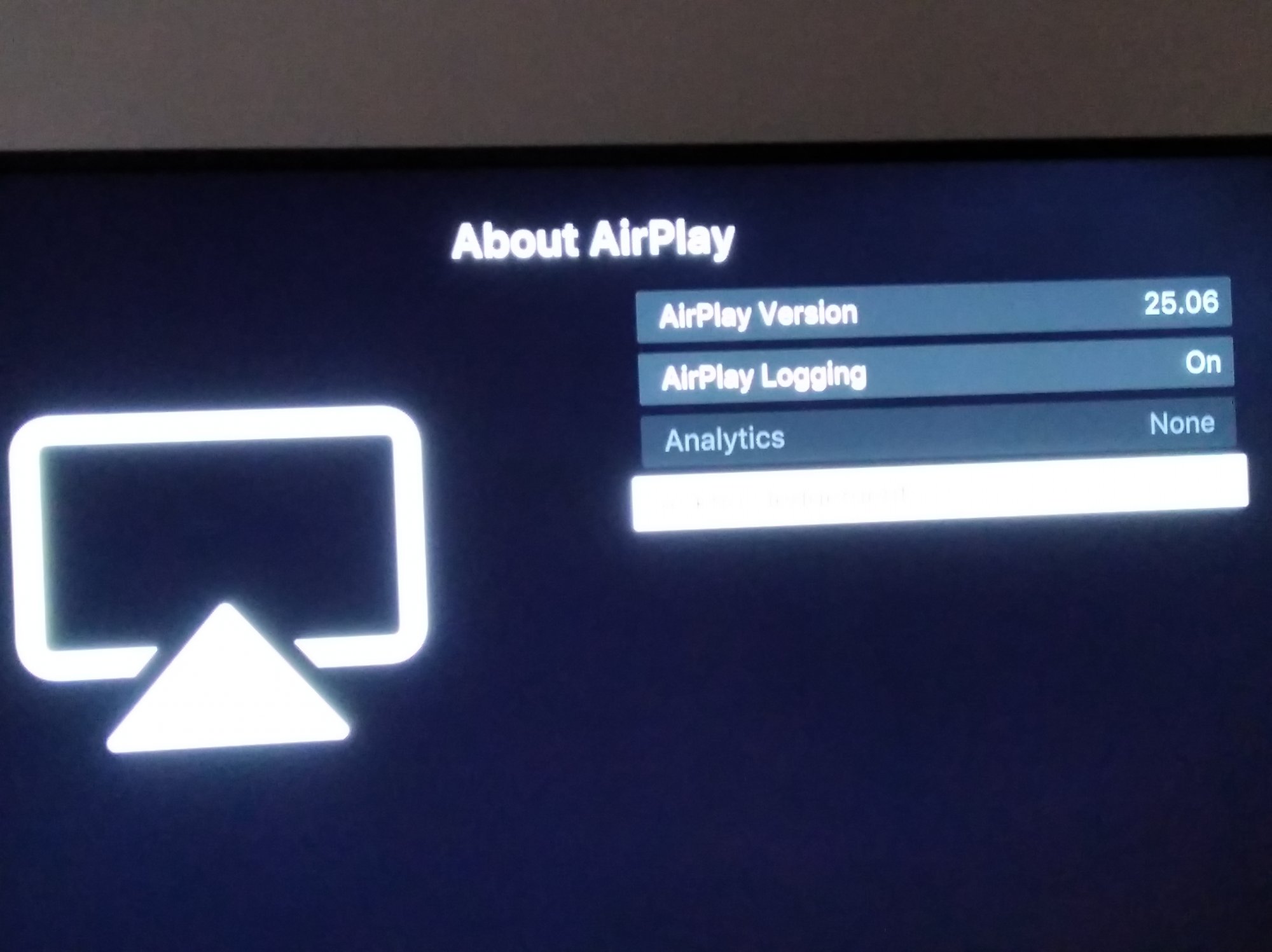 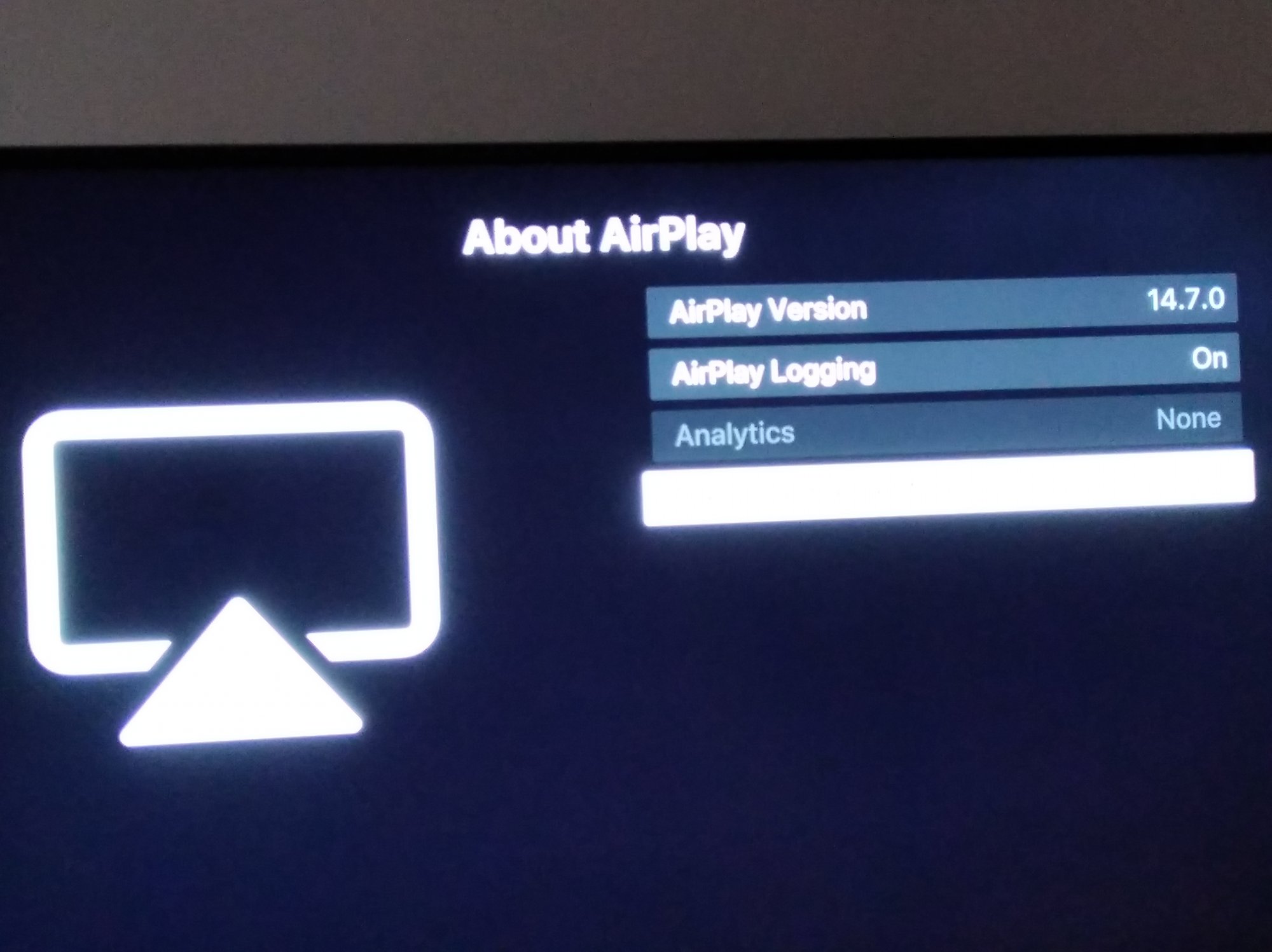 Also tried 14.7.0 and it didn't work too. However, what I noticed now is that my mbp 2011 shows "Looking for Apple TV" while my newer mba shows "Looking for TV". Is that a hint that it is only compatible with apple tv and not airplay tv devices in general?
Comment
You must log in or register to reply here.
Share:
Facebook Twitter Reddit Email Share Link
Register on MacRumors! This sidebar will go away, and you'll see fewer ads.
Sign Up
Top Bottom