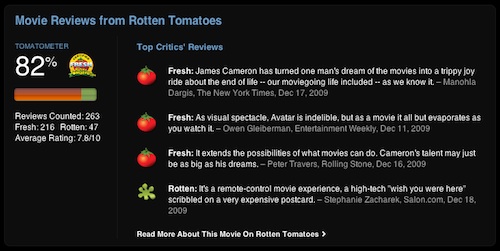 TUAW notes that Apple has added a new section to its iTunes Store pages for movies, offering ratings and reviews from popular review aggregator Rotten Tomatoes.

iTunes' integrated Rotten Tomatoes ratings presents the movie's prospective buyers and renters with the Tomatometer chart featuring the total count of reviews along with a fresh/rotten breakdown and the average rating. Viewers are also shown four review snippets from Top Critic reviewers, follow by a link to the movies page on RottenTomatoes.com.
Click to expand...

The new section appears between the "Viewers Also Bought" and "Customer Reviews" portions of each film's iTunes Store page.

Sweet! Now everyone will read my reviews. It's all going according to my plan... heh heh heh. *pyramids hands a-la Steve Jobs/Montgomery Burns*

A Metacritic rating would be better.

Thats a nice feature and maybe a bit more reliable than the user reviews on iTunes.

I would prefer that for my own reference... but seeing as Metacritic won't list me (they have no open application process), but Rottentomatoes does... I'll take it.
M

They still need to figure out how to offer movies for rental on a consistent basis. I'm fine with the 30 day window for initial availability, but when the movie goes back to being purchase only 6 months later is ridiculous. I know it's the movie industry that's demanding this windowing, but it's just silly. Once something is available to rent on the iTunes store it should stay that way.

When TBS gets "exclusive cable" rights to run a movie, Blockbuster doesn't pull it off the shelves. Why should a "virtual" rental store be any different?
Q

Many films and TV shows have unreliable ratings due to the large amount of people using it to complain about the high prices itunes charges for its content. I cannot understand how a downloaded film can cost more than picking up a copy from a bricks and mortar store. This pricing policy is not helping apple's plan to rid the world of spinning discs or users judging the film on its own merit.
S

And yet, people will continue to buy and rent bad movies.
P

just off topic a bit...
It always riddled me why Amazon, who already owns IMDB, didn't integrate IMDB better into Amazon. They could have bought Netflix, too, and leveraged their customer base and fold it to their mail order system to create economies.., in other words, they would have the rating system/content, the logistic system and customer base and order/usage habits.

(just a comment , since I believe that IMDB had great potential, but has steadily gone downhill in quality, while Rotten Tomatoes has gotten better in comparison)

qbricc said:
I cannot understand how a downloaded film can cost more than picking up a copy from a bricks and mortar store.
Click to expand...


If you were a distributor, and you had thousands of established brick and mortar retailers that all hung on your pricing structure to keep MSRP constant within a given range, you'd be hesitant to allow Apple to come along and undercut everyone you've been doing business with for decades.

I don't like it either, but that's the way it goes for now.

The "artists to iTunes" approach requires some very talented artists.

Currently, for every artist (the ones actually selling albums), there are over 100 other people between their talent and your ears.

All those people like this system, because it gives them something to do.

I like this a lot. Now just get rid of the user reviews

Critics are terrible. You can't trust them at all. Just because they like a movie doesn't mean it's good. And if they hate something, it may very well be great.

I trust user reviews, especially if there are hundreds or thousands of them. Individual people do a much better job of reviewing movies than critics.

Roger Ebert rocks, but really, the rest of the critics are a dying breed. Newspapers are dying and with them, the critics.

Movies can reach the people today directly. The interloper the critic is a relic.
R

Ironically this will mean that the venerable itunes becomes a more efficient way of getting rotten tomato scores, given how slow and annoying their website is!

Rotten tomato is cool, but they do tend to pan any romantic comedies to my wife's lasting annoyance, and tend to over-hype weird quirky indie movies.
S

*sigh* So many things wrong with this.


512ke said:
Critics are terrible. You can't trust them at all. Just because they like a movie doesn't mean it's good. And if they hate something, it may very well be great.
Click to expand...

Here is one review of Valentine's Day from iTunes:
"Oh my god i love this movie the best movie ever if your knowing you should watchit you should"

I don't consider that a well-informed, analytical critical opinion.

I trust user reviews, especially if there are hundreds or thousands of them. Individual people do a much better job of reviewing movies than critics.
Click to expand...

I trust critic reviews, especially if there are hundreds or thousands of them. Individual critics do a much better job of reviewing movies than users.

Roger Ebert rocks, but really, the rest of the critics are a dying breed. Newspapers are dying and with them, the critics.
Click to expand...

Think about this for a minute. What can be considered the biggest collection of human knowledge, all accessible from any single connected computer, part of which is made up of places dedicated to the subject of movies and reviewing them? Hint: You're using it right now.

Also, you're saying you've read reviews by every movie critic in existence, and the only reviews you liked were the ones by Roger Ebert?

Movies can reach the people today directly. The interloper the critic is a relic.
Click to expand...

When could movies not reach the people directly? Isn't that the point? The difference is that with critics I can find out a movie is **** and make an informed decision not to spend my money to see it.
C

I never really liked Rotten Tomatoes review system.
Since it's either fresh/rotten or positive/negative they have to place everything to be either fresh or rotten. So for say a neutral review, which a lot of movies fall under, they usually get pushed to the rotten side.
So most movies have a much lower rating then it should.

Or both. The "Now Playing" movie schedule app gives you both.
S

Just yesterday, literally yesterday, I was browsing through movies in iTunes and thinking to myself, "it sure would be a nice feature for Apple to include ratings from rottentomatoes or metacritic".

The coincidence is overbearing.

I never listen to any reviews. When they say a movie is like a 20%, I always find it to be up in the 80s. Movie critics are a joke. It's all opinion based.

If this happened a month ago I would have agreed with you, but the RT score for Iron Man 2 was way too high

Like I care about the public opinion of a movie? The same public that made Transformers 2 a hit last summer? Meh.

Should have been Metacritic.

Agreed. Metacritic site is much more professional looking.
A

Like I care about the public opinion of a movie? The same public that made Transformers 2 a hit last summer? Meh.

Transformers 2 scored 20% on Rotten Tomatoes, based on 228 critics' reviews.

Not sure what you are busy raging about there, tbh. It's similar to Metacritic.

I use Metacritic for game scores. But even then, I rarely use that site.

RottenTomatoes, on the other hand, is bookmarked at home, at work, on my mom's system, on my iPhone, etc.

I check it EVERY day. My mom was big into movies - she has cataloged everything she has ever seen dating back to the 1940s.
I'm also big into movies, and I love seeing what the score is.

Like the upcoming MacGruber movie - positive so far. Shrek has been negative so far. Scores on RT impact if I see a movie or not.
I have a young daughter that of course loves kids movies, but I will not sit through some animated movie if it got horrible reviews. It's a waste of time and money.

I agree with critics MOST of the time. So if they say the story sucks, the acting sucks, no plot, etc - I find some of the same things wrong with the movie.
You must log in or register to reply here.
Share:
Facebook Twitter Reddit Email Share Link
Register on MacRumors! This sidebar will go away, and you'll see fewer ads.
Sign Up
Top Bottom