Apple starting to leave a bad taste in the mouth

Is it just me or has Apple changed substantially for the worst?

the vibe Apple puts off is microtransuctioning the crap out of every aspect, be it apps, dongles, services, ads, etc. While great for shareholders, it really starts to make me think twice on some aspects.

The in app purchasing is the part the part that bothers me the most, not because of the concept, but because of how universal it is applied.
Reactions: chikorita157
N

Respectfully disagree. Apple may be getting some bad press, but the company is dong great. Just because other companies say bad things about Apple doesn't make them true. Epic is a greedy, hypocritical multi-billon dollar company that wants all the benefits of Apple's hard work without having to pay for it. If they don't like paying a commission to use the App Store they are welcome to invent and engineer their own platform and then create an App Store then they can use it free of charge. By the way, Epic forces developers using its engine to pay a commission.

It was predictable that some people would kvetch about Apple not including the power adapter with the new Watch, but seriously, who doesn't already have a bunch. The last few Apple devices I bought I never even took the charger out of the box. As Lisa Jackson said, this does reduce eWaste in a small way.

Under the surface Apple is doing great. They have worked hard to hire a diverse staff. Men and women make nearly the same pay. Now that Apple itself uses mostly renewable energy they are pushing suppliers to do the same.

The technology going into the iPhone, Watch, iPad, etc. is awesome. The new A14 is using a SoC with 11.8 billion(!) transistors. The line width is now 5nm (about 15 or 20 atoms). iOS 14 comes out tomorrow with a slew of new features.

I don't mean to sound like an apologist or a cheerleader too much. My point is that even though the critics may throw some mud at Apple from time to time, Apple itself is doing great. We are not seeing a mass exodus of engineers, there are no complaints about financial misconduct, or other problems. We haven't seen mass recall of any Apple product because it caused fires or other problems.

Also, Apple tends to be a leader on some trends so they are bound to collect some arrows for that. A few years ago it was because they dropped the headphone jack. That has become normal on many phones. Pretty soon Samsung et al will stop including wall warts.

There are some issues with the App Store, but that is not surprising. The App Store only started up a decade ago. Give it another thirty years or so to work out the rough spots.
Reactions: G5isAlive

dukebound85 said:
Is it just me or has Apple changed substantially for the worst?

the vibe Apple puts off is microtransuctioning the crap out of every aspect, be it apps, dongles, services, ads, etc. While great for shareholders, it really starts to make me think twice on some aspects.

The in app purchasing is the part the part that bothers me the most, not because of the concept, but because of how universal it is applied.
Click to expand...

It’s not just you, but there are millions who apparently don’t feel the same way.

My guess is it's a portmanteau; a combination of micro-transaction and suction. They're literally sucking the money out of consumer wallets. Nickle and dime the bejeebus outta us.
Reactions: MacUser2525
C 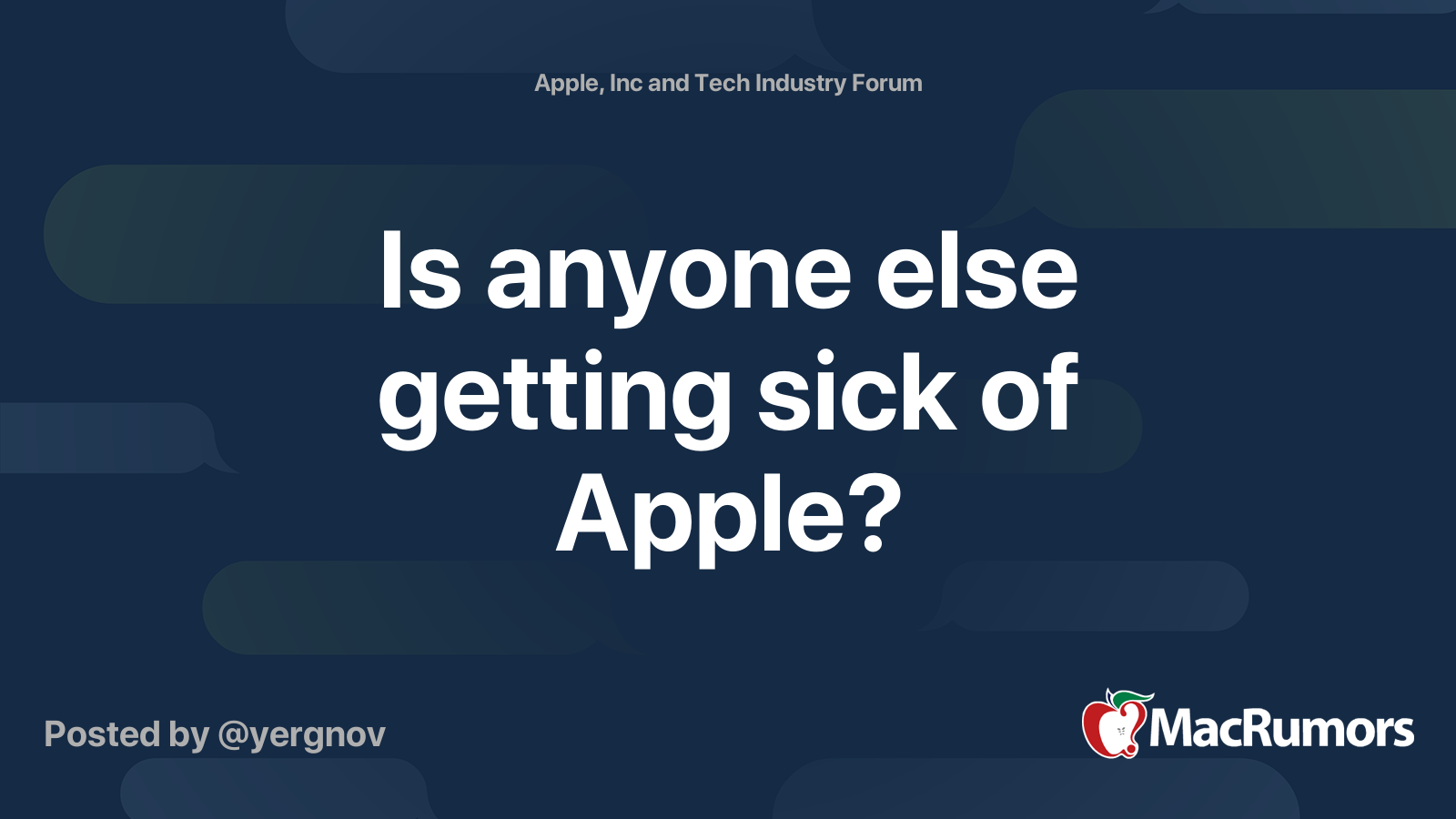 Is anyone else getting sick of Apple?

Let me start by saying I am not your typical Apple hater. I have been what most have called a "fanboy" for decades. In fact, my first computer in college was a Macintosh SE with a 20Mb hard drive and small black and white screen. Many years later, I have had 5 iPhones, 6 iPod touches and 3...

youre about 15 years late. apple runs a money vacuum and is worth such an absurd sum of capital that the only conclusion I can make is the whole market economy that exists is completely fubar.
Reactions: vkd
You must log in or register to reply here.
Share:
Facebook Twitter Reddit Email Link
Register on MacRumors! This sidebar will go away, and you'll see fewer ads.
Sign Up
Top Bottom