Even if it did though, thats hardly the seamless apple ecosystem were used to and why we pay a premium for Apple devices.

They just need to increase the iCloud Photo's app on the Apple TV 4K to 60fps with increased bitrate, even if it stays at 1080p. Or add the option for the Photos app to use a local homeshare.

This will of course be adaptive to your internet connection so will have no effect on those that cant use it.
C

Its an unrealistic amount of data to process (HEVC) and bandwidth usage for a cloud/streaming service. The 4k 60hz capture from an iPhone easily surpasses 100Mbps and I saw it touch 145Mbps at a peak in this clip I made. Since I only made one clip I image it can get quiet a bit higher. 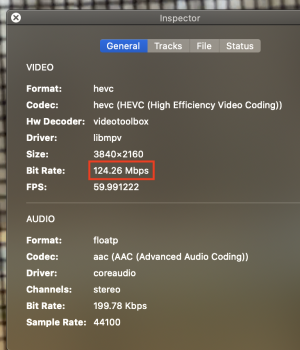 For perspective the peak from that capture is 4-5x more data than peak Netflix 4k24 HDR streams. I don't know if they changed it but that is more data then Apples servers individual user caps. A lot of people don't have Wifi that fast and the vast majority don't have LTE that fast.

Playing the video locally (full 4k60 HEVC) will drop a couple frames as the AppleTV 4k's HEVC decoder struggles to decode it fast enough and it buffers a bit too often (overhead somewhere).

Using dev tools on the AppleTV it would appear Apple is trying to maintain an average bit rate of around 10-15Mbps without varying the content quality. Methods used by streaming services like YouTube to vary resolution based on internet speed requires a transcode profile level and speed that is too lossy to maintain quality which is the reason its so easy to see when its not at full res. By having a target resolution and frame rate Apple can have a complex transcode profile level to maintain image quality (for that resolution) at a much lower bit rate.

Since video capture quality will keep getting better (10 bit video capture eventually) it will be a very long time before we are able to stream an unaltered video at its highest quality easily. If you absolutely need (or just want) to playback iPhone 4k60 video captures you can use 1st part options like the TV app from a Mac/PC (home sharing) or 3rd party video player apps that supports network access/DLNA from a NAS or computer (Plex, Infuse, VLC, etc).
D

I appreciate and understand everything you’re saying but I’m not talking about 125mbs original files.

When a 1080p video playing via the YouTube app on the Apple TV looks better than the same video being played through the photos app via iCloud there is something wrong.

So yes I probably agree, if Apple aren’t going to provide the bitrate to their 4K files then that’s the issue.

However, if I go back to 1080p videos that I shot before switching my phone over to 4K they still look very poor. Very low bitrate, blocking all over the place. Not as good as the same files played via YouTube. It’s just not practical and the Apple experience to switch between photos and then YouTube when you’re looking through a holiday album is it.

The iCloud part would be mute if Apple allowed the photos app to pull from iCloud or local macs at your choice. The computers app solution is a mess for local viewing, generated thumbnails for 20,000 photos everytime you open the app is such a joke.

Such a shame as the convenience of the photos app on the Apple TV is great.

Im going to do some more tests as it seems to my eye that my videos before I switched to HEVC look better, more bitrate. It doesn’t make sense technically but I can see a difference. I wonder if there is an issue there.
You must log in or register to reply here.
Share:
Facebook Twitter Reddit Email Link
Top Bottom