Relentless Power said:
That’s fair. And I admit, I actually edited my post after you responded, so that’s my own fault there. I don’t think PF is a ‘bad place’ to work out, but I do agree with your comments that I’ve read/heard about how they really don’t want specific type of people working out in that gym with the whole ‘no intimidation.’

And you’re right, the lunk alarm is absolutely ridiculous, as it’s meant to humiliate/embarrass those who are allegedly doing things they shouldn’t. If they don’t like certain things that people are doing, they could simply address it with them in person versus blaring some alarm expecting for the member to hear it with their headphones on. The ‘lunk’ alarm is juvenile and completely unnecessary.
Click to expand...

schneeland said:
Thanks! I'll take a look.
Click to expand...

its my most used most favorite app on my watch and works amazing
Last edited: Jan 23, 2020
Reactions: Relentless Power
D

schneeland said:
Makes me wonder: how good is the Apple Watch at tracking weight lifting? I was under the impression that most tracked activities are currently cardio-related.
Click to expand...

I use mine to track me while I'm lifting weights. I burn a decent amount of calories doing it.

DeathChill said:
I use mine to track me while I'm lifting weights. I burn a decent amount of calories doing it.
Click to expand...

It’s funny you mention about burning calories when lifting. There was an article not that long ago about a study was shown that actually weightlifting at a fairly intense rate can burn as many calories/if not more than cardio. Now, I would probably think it depends on what type of weightlifting you’re doing (Seated row/lat pull down/incline press) that would require to burn excessive calories with a heavier weight v.s. just sitting on a bench doing dumbbell curls with a light weight with very little effort. Of Course, intensity has to be taken into that measure that someone is moving at a fairly decent speed, high volume in repetitions, etc.

Cosmosent said:
I've gone to the local UTC 24 Hour Fitness here in La Jolla 5+ days per week for years, & have NEVER ONCE seen anyone wearing an Apple Watch there !

Lots with iPhones, almost everyone, but ZERO Apple Watches !
Click to expand...

That's like saying, I have never seen airplanes at a busy airport

MacInDawg said:
I don't think it does track weight lifting. At least I haven't noticed that feature on my apple watch.
Click to expand...

Apple today announced the launch of a new Apple Watch Connected program that should benefit both gyms and gym-goers.

The program will reward gym-goers for using an Apple Watch to track their workouts, with incentives varying by gym. At participating Crunch Fitness locations, for example, members can earn up to $4 off the cost of their membership per week if they meet certain activity goals, according to CNBC. 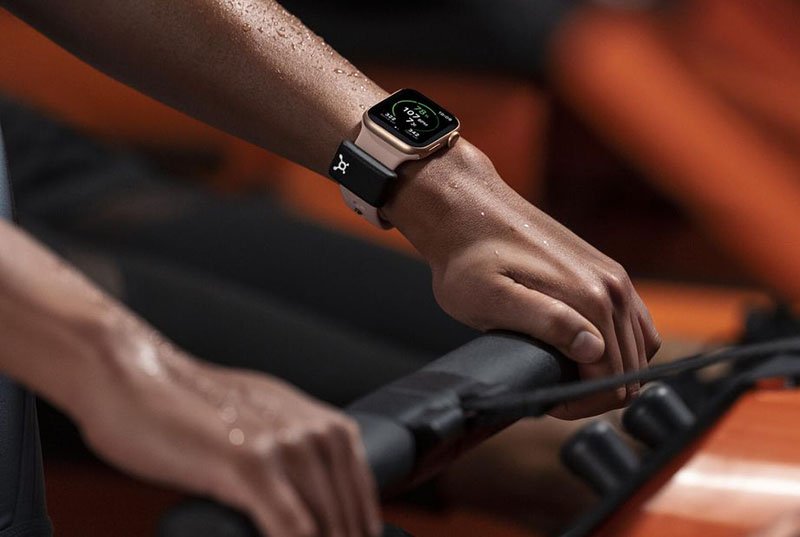 In return, gyms could attract new customers who wear an Apple Watch and see increased loyalty from existing members.

It is free for gyms to join the Apple Watch Connected program, so long as they meet the requirements, including having iPhone and Apple Watch apps to track workouts, offering rewards and incentives, and accepting Apple Pay. Apple also encourages gyms to offer GymKit-enabled equipment for improved Apple Watch syncing.

Four gym chains are rolling out support for the program in the United States starting today, including Basecamp Fitness, Crunch Fitness, Orangetheory Fitness, and the YMCA, according to CNBC:Last month, Orangetheory Fitness announced that it would begin rolling out Apple Watch support to its gyms in the first quarter of 2020. The gym chain created a small accessory called the OTbeat Link that attaches to an Apple Watch band, allowing the Apple Watch to sync with the chain's heart rate monitoring system.

Anyone know what that accessory is on the Apple Watch band? I've never seen that before.
M

I'll hold my breath for any of the gyms around me supporting this. I do like my Apple Watch tho.

I agree with an earlier comment that would like to see Apple work directly with exercise equipment manufacturers. I would love for my AW to be able to anonymously capture the data from a workout on an eliptical trainer (distance, calories, level setting). However, I am not interested in having my workouts tracked by the gym via the gym's app (or anyone else's app). I would greatly prefer to just use the Apple Health and Activity apps than trusting my data to a 3rd party app.
C

The only reward I want for going to all that fitness effort is a cream cake and a week in bed to recover.
J

On the good side, this will encourage people to move more -- especially the 70% of America that is overweight and/or obese. However, cardio works well until it doesn't and in the long term the body adapts to cardio by slowing down the metabolism and sacrificing muscle. A more integrated approach that incentivizes resistance training would be better.