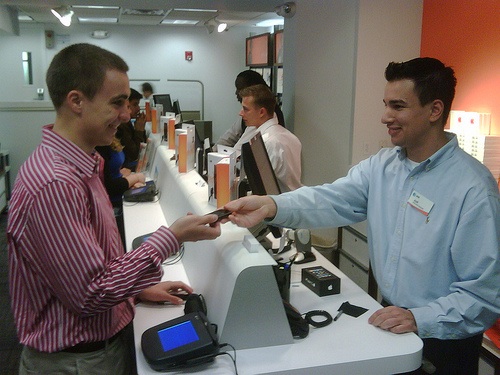 Bloomberg reports on AT&T's preparations for the loss of iPhone exclusivity in the United States, which has been claimed by some sources to be coming at the end of the year. According to the report, AT&T's recent announcements regarding the addition of a plethora of new Android and Windows Phone 7 handsets is being accompanied by a significant retraining of its staff to handle the shift from the iPhone focus to a broader platform of offerings.

AT&T Inc., facing the possible loss of its hold on the iPhone, is adding handsets at an accelerating clip and retraining store staff to help reduce reliance on its top-selling smartphone during the holidays.

The company's lineup this year will have ballooned by about 10 smartphones ahead of the holiday season to more than 20, including ones running Microsoft Corp. and Google Inc. software. Yesterday, AT&T reported the effort is showing early success, saying more than half of new customers chose a device other than the iPhone last quarter, up from 36 percent a year earlier.
Click to expand...

The shift comes just as AT&T approaches Verizon's subscriber base. AT&T announced yesterday that it had ridden the strength of the iPhone 4 to a net gain of 2.6 million subscribers during the third quarter, giving the company a total of 92.8 million subscribers. Verizon, meanwhile, added just under 1 million new subscribers to reach 93.4 million customers.

I really hope its true. I really want the veriphone
Comment
M

Once the exclusivity runs out I would really love to see which provider is the best for the iPhone and how they compare in certain situations.
Comment

Ummm why does this all even matter? Get whatever phone and service is best for your needs, period! iPhone, Droid, Samsung, whatever. Just enjoy your devices, thats what matters most!
Comment
S

This is bound to happen.

I'm really hoping to see some competition between the two to possibly lower prices a bit in the plans.
Comment

Will be interesting to see how many people make the switch to Verizon (assuming the rumors of iPhone being available on Verizon are true)... I'll definitely consider it, based on how reception is locally (there are a few dead spots here for AT&T).
Comment
D

AT&T is pretty good where I am, so there would have to be a lower price for me to switch to verizon for the iphone.
Comment

I wonder (a) how many current iPhone owners will switch from AT&T to Verizon and (b) how many new iPhone users there will be. Of course, I'll believe the iPhone will go to Verizon when it actually happens.

Glad to see all the rumors are finally starting to add up.
Comment
A

dlewis23 said:
AT&T is pretty good where I am, so there would have to be a lower price for me to switch to verizon for the iphone.
Click to expand...

Same here, even though I get 0 to 1 bar at my place of work, but good bars everywhere else, they have wifi which still allows me to text to the wife if need be.

I have a feeling the Verizon iPhone will be a little more expensive in plans. $5 more, but you get more data instead of the measly amounts AT&T offers.
Comment
B

i just hope that they let you browse and talk at the same time. if not i will be sticking with att
Comment
H

The real question here is how much did AT&T pay that customer to smile.
Comment
M

iphone1105 said:
Ummm why does this all even matter? Get whatever phone and service is best for your needs, period! iPhone, Droid, Samsung, whatever. Just enjoy your devices, thats what matters most!
Click to expand...

Ummm, because more options means it'll be more likely that people get what is really best for their needs.

Analyst have been singing this song for over 4 years, can we give it a rest?
Comment

Sounds good to me! I might jump the bandwagon as I only get 1 to 3 bars in my apartment now and a bunch of dropped calls
Comment

I am glad AT&T is focusing on smart phones other than the iPhone. There are a lot of people out there me being one of them who do not want an iPhone but have to or want to stay with AT&T.
AT&T pretty much carriered crap non-iPhone smart phone except for the blackberry.

It is nice to see AT&T to focus on something other than blackberry and iPhone.
Comment

I'm holding strong to my prediction from June/2010 where I stated that I think its coming to Verizon by Jan. 31st of next year.

My fiance's Verizon (and its 3G) works in all of the areas we travel, unlike my t-mobile dumb phone. (I can't wait to join the 21st century). From Phoenix to the Adirondack mountains in NY state, she always has service and never drops calls. So, with any luck I'll be getting a Verizon iPhone on January 31st.

I just looked at my join date. I guess it was July-2010 when I officially posted my prediction. Oh well...
Comment
S

jav6454 said:
Analyst have been singing this song for over 4 years, can we give it a rest?
Click to expand...

No one is forcing you to read these Verizon-related posts. Anytime there's a new one you voluntarily jump in and pound your chest "There's not going to be a Verizon iphone". You don't seem to like these threads, so why don't you just ignore them.
Comment
You must log in or register to reply here.
Share:
Facebook Twitter Reddit Email Share Link
Register on MacRumors! This sidebar will go away, and you'll see fewer ads.
Sign Up
Top Bottom