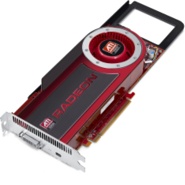 In place of the standard NVIDIA GeForce GT 120 graphics card used on the new Mac Pro released this morning, Apple is offering a $200 option to upgrade to the ATI Radeon HD 4870. In addition, Apple is apparently planning to make the ATI card available as a standalone product compatible with both the new Mac Pro and the previous generation of Mac Pro released in January 2008. The standalone card is listed as "currently unavailable", and no price is given.

Of some interest is the fact that the standalone Radeon HD 4870 requires a minimum of OS X 10.5.7, which has not yet been released, although versions of it have been seeded to developers. No release date for the 10.5.7 update is known, and the standalone ATI card's lack of an availability date at this time provides no additional information on the timeline for the next version of OS X Leopard.

The Radeon HD 4870 had been promised as "coming soon" for the Mac Pro last August, a promise that is finally being fulfilled.

Apple has in the past made newer graphics cards available for previous-generation Mac Pro products, with the NVIDIA 8800 GT card that had been an upgrade option on the Early 2008 Mac Pro being made available as an upgrade kit for the "1st Generation" Mac Pro, which had been released in August 2006.

Hope they release it for the 2006/7 generation MacPros.
Comment

I'm not sure I'd call 7 months later "soon," but I'll take one anyway.
Comment

Lesser Evets said:
Hope they release it for the 2006/7 generation MacPros.
Click to expand...

Nice move Apple and ATI. I'm sure many prior generation Mac Pro owners will be psyched to upgrade to this card.
Comment

Guess when is determined by 10.5.7 ... and they won't say when it's available to avoid giving away info on 10.5.7 (or to pressure themselves to release before ready).

Just realized how outdated my avatar is too!!
Comment

Note that the prices in Sweden include 25% tax. So if your want to convert it to the US price, pull of 25%.
Comment

That is, if the built-in iSight/microphone will work if I plug the USB in.
Comment
M

Im out of the ATI loop but is this card better than the NVIDIA Quadro FX5600? Id have to check if this ATI card is even Autodesk Maya cert.
Comment
M

I'm really disappointed in the nVidia offering. From what I've read the 120 GT is less than 8800GT, and on top of that both the ATI card and nvidia cards no longer go passed 1GB.

That said, this update has been long over due and I'm glad we are finally getting at least one nice GFX card we can use in our older Mac Pros. Still, I guess we have to wait another year before we can get a single Gfx Card with more than 512MB of ram on it. Sigh.
Comment

It's a shame this isn't the higher end 2gb 4870x2 card, but a move in the right direction.
Comment

Note that the prices in Sweden include 25% tax. So if your want to convert it to the US price, pull of 25%.
Click to expand...

Available in the UK too, here:

Depends on what you are running and even at that, what function inside that software. For example within Photoshop it uses OpenGL for the arbitrary rotation features but not for everything.

Unfortunately, this great news will be superceded by the announcement of the 5800 series graphics card from ATI. So, once again...apple will be behind in the race for latest/greatest video cards.

It would be nice if they offered the 4870x2 as an option as well...
Comment
N

mBox said:
Im out of the ATI loop but is this card better than the NVIDIA Quadro FX5600? Id have to check if this ATI card is even Autodesk Maya cert.
Click to expand...

It will kick the Quadro's ass in games, for pro apps, not so much obviously since it's an enthusiast card and not a pro card

However I see no reason why you couldn't chuck in the Quadro from the old Mac Pro.

You might be able to pick up a FireGL card and flash it with a Radeon firmware, there have been some success stories of that.
Comment
F

This further justifies my selling of the beloved Dual G5 for the 2.66 Xeon. Complete hardware support throughout. I was initially planning on buying the 8800, but this is good news