The Verge reports that Best Buy has been surveying some of its customers on proposed products and services, with the company including a description of a 42-inch "Apple HDTV" priced at $1499. The listing is undoubtedly simply a concept dreamed up by Best Buy to help gauge interest in such an offering, but provides an interesting perspective on what the major electronics retailer might be hoping for and what it thinks its customers would want in an Apple television set.

Be one of the first to get the all new 42" Apple HDTV at Best Buy for $1499. Apple finally reinvents what a TV can do:

- 42" 1080p LED flat panel display
- Incorporates Apple's operating system (iOS) found in its current Apple TV set top box which allows you to purchase and stream movies and other entertainment from the Internet
- Download and use apps from the App Store. Can you imagine playing Angry Birds on a big screen in your living room?
- Supports Apple's new iCloud service for storing your movies, TV shows, and music content that you've purchased from iTunes and beam them to your Apple HDTV.
- Use your iPad or iPhone as a remote control, and do everything from controlling your TV, to purchasing new shows and swapping content between your Apple devices and the iCloud service.
- Built-in convenience with built in iSight camera and microphone for Skype.
- In addition to iTunes, stream content from popular sites such as Netflix, YouTube, and flickr.
- Available for $1499
Click to expand...

The promotional text makes no mention of Siri or voice control, which has been rumored to be one of the device's key revolutionary features following Steve Jobs' revelation that he had "finally cracked" how to reshape the way people interact with their television sets. 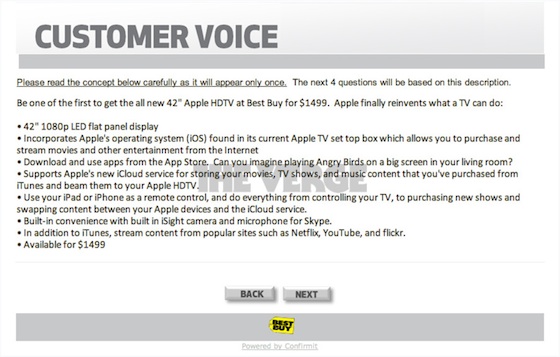 Best Buy's survey questions on the proposed Apple HDTV go on to assess respondents' level of interest in purchasing the product, whether they believe it is new and different and whether it would solve a problem or fulfill a need for them.

Apple will find a way to sue best buy over this.
Comment

What happens if all Best Buy sells is Apple products? Would they become an Apple store?!
Comment
G

These questions were, quite obviously, not written by a fanboy. Lololol.
Comment
M

Will it have 3D. Hopefully Apple have cracked 3D tv with no glasses?
Comment
S

Come on, I know able can charge whatever, and people will still buy it. But when it comes to a tv, apple or not, nobody is gonna pay 1500 dollars for a 42" tv. Come on, my parents won't even pay 700 for a 55". This is one apple product I will not be buying and neither will anybody else.
Comment
C

Come on, I know able can charge whatever, and people will still buy it. But when it comes to a tv, apple or not, nobody is gonna pay 1500 dollars for a 42" tv. Come on, my parents won't even pay 700 for a 55". This is one apple product I will not be buying and neither will anybody else.
Comment
O

What does Best Buy gains with this survey?
Comment
A

There wouldn't be Skype it would be FaceTime only.
Comment

Come on, I know able can charge whatever, and people will still buy it. But when it comes to a tv, apple or not, nobody is gonna pay 1500 dollars for a 42" tv. Come on, my parents won't even pay 700 for a 55". This is one apple product I will not be buying and neither will anybody else.
Click to expand...

oliversl said:
What does Best Buy gains with this survey?
Click to expand...

Obviously they are considering carrying the product. Customer interest and demand will determine if they will or not and if so how many units they should acquire from Apple and stock in warehouses and stores.

However, there is no way an LED at 42" with those types of features will be available at only $1499. Seems like a pipe dream to me. The LED TVs are pretty expensive even without any of the extra stuff Apple would add.
Comment
M

you people that say that 1500 is too expensive.... You should go to a store and see how much a GOOD tv nowadays cost... I mean, totally respectable if you dont want to drop that much cash on a TV, but only crappy TVS cost 600-700 dollars...1500 for a 42 seems quite cheap considering all that I expec it to have...
Comment
A

Isn't a siri enabled iPhone or, a camera and siri enabled iPod Touch, and an Apple TV, (and optional Boxee) and your existing TV "better"? Not to mention half the price.

Apple accomplishes much of its ecosystyem simplification by managing a subset of resolutions of content. It may be that their goal of selling a display is simply to bracket in the display , focus all production on a single resolution (1080P) maybe in 2 sizes, and unified hardware, to limit the needed content variety of formats and I/O. If it has 11N (and next), TB and HDMI as the only I/O it might lower the production cost enough to increase the margin.

This is a trial balloon to "flummox" the competition leading to whatever walled garden release Apple does do. It worked on the tablet!

What I want Apple to do is make a box I can put on any occasional use TV in the house to talk to the server. It should have large cache, not live streaming so stuttering is not the price we pay for the features. I can live with content that is 5 minutes not quite live as a default. I figure they can do that profitably for $69.99 or so. I want to stop paying monthly cable or satellite fees per TV. Full DVR and random access to content would be the compelling reason to purchase.

If Apple released a $1499 42" HD TV, I'd laugh in their face unless there is some kind of amazing-killer app to it.

The problem with TV these days is that most TV is completely awful for anyone with a smidgen of a "real life". I think Apple should try to get around that major problem. Pity Jobs isn't still alive to start a major TV studio.

These questions were, quite obviously, not written by a fanboy. Lololol.
Click to expand...

They could throw in a cam that will find faces and stay on them... so you can watch old-style movies in private, but with others with the same TV, having all their faces down the black-strip sides of the unfilled aspect on screen.

... not sure how entertaining that would be, but it would be something.
Comment

Will the "apple TV" part be upgradable?

What other spec's does the TV support? 3d? whats the HZ?

Master-D said:
Will it have 3D. Hopefully Apple have cracked 3D tv with no glasses?
Click to expand...