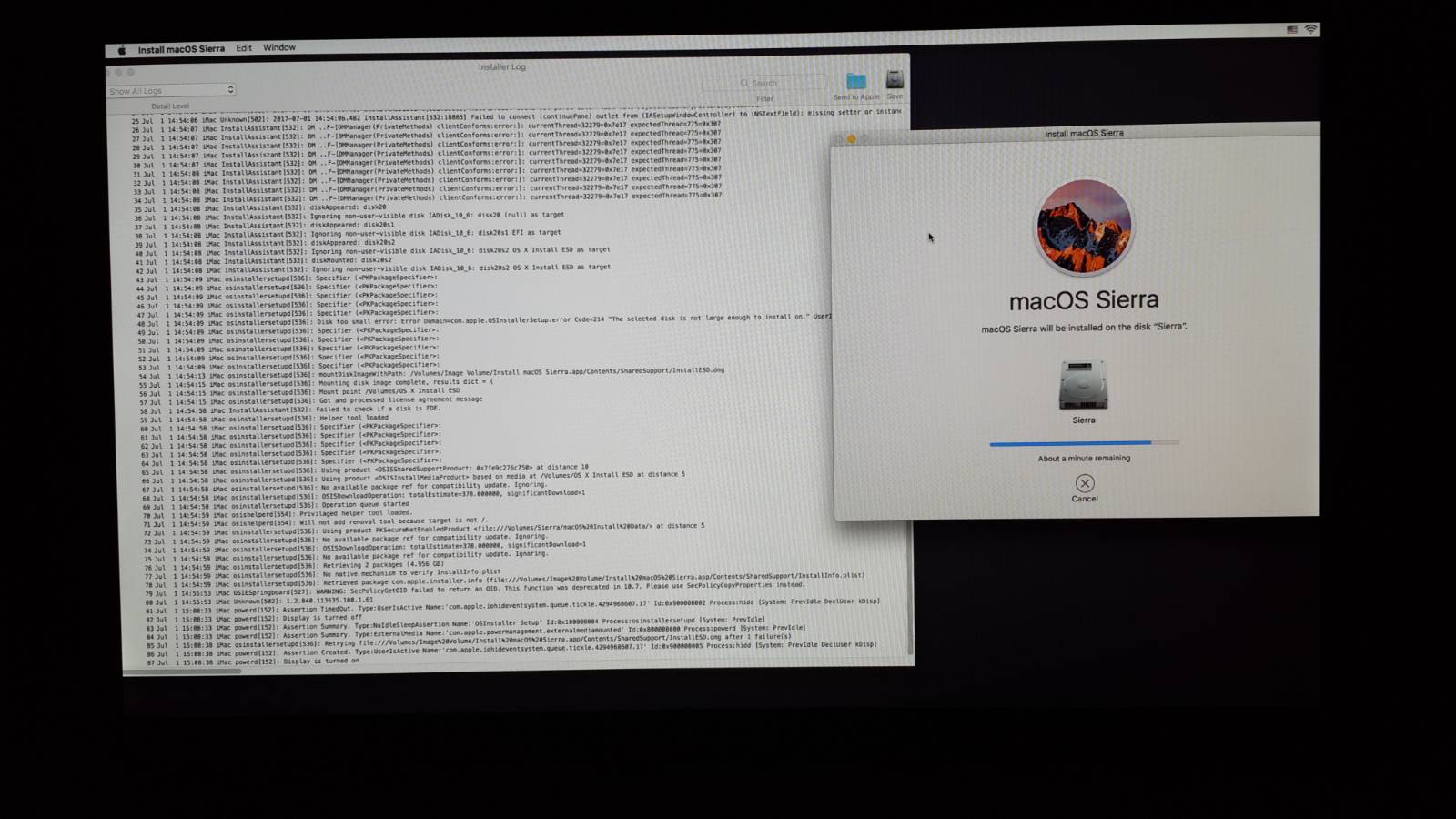 imac osinstallersetupd[536]: retrying file:///volumes/image%20volume/intall%20macos%20sierra.app/contents/sharedsuppo rt/instllesd.dmg after 1 failure(s)
First time I gave it time bout 2 hours. But only thing I get was 5th

"retrying after 5 failure(s)"
PLEASE HELP ME. I DON'T UNDERSTAND WHAT I'M DOING WRONG. IT IS VERY IMPORTANT, URGENT

Is this a restore or fresh install?

Your log says "The selected disk is not large enough". Did you use disk utility and format the drive before the installation?
Comment

If this is a spinning hard drive, and not an SSD, then you do need to give it time.
Does your iMac ever restart after you run the installer? Should only take 10 - 15 minutes before it restarts on its own, then the actual install (with a progress bar giving some rough idea about how much time is remaining.) That part after the restart can take quite a long time --- maybe an hour or two.
As Audit13 suggested, put the original RAM back in place, and try the install again. If that does finish, then you will have a working system, and you can try to discover why your new RAM may not be working properly then.

The installer won't even begin if YOU choose a disk that is reported as too small. Other disks show up in the log, such as the EFI partitions, etc, which will be too small, but you can't choose those anyway.
But, yes, you should erase the drive again, as you did say it was a "fresh" install, which implies starting with a blank drive.
Try the install again, try to ignore watching the log. Give it time to finish. It may appear to stall during the system install, particularly when installing to a spinning hard drive. If 2 hours wasn't enough, let it go 3 hours. If there is really a problem, the install should fail with an error of some kind.
I have seen macOS installs just stop, no errors, just stop progressing. If you can say that you think the install is complete, then that's possible. With that in mind, you could force the system off (hold power button for 5 seconds) Then press and release the power button, and wait for your Mac to do "something". Might just finish up, and take you to a new user setup/restore from backup, etc.
Comment
You must log in or register to reply here.
Share:
Facebook Twitter Reddit Email Share Link
Register on MacRumors! This sidebar will go away, and you'll see fewer ads.
Sign Up
Top Bottom