Facebook is building a new app that will serve as a direct competitor to Snapchat, according to a report from the Financial Times. The project, which is codenamed "Slingshot", will enable users to send each other pictures or short video messages through a simplified, grid-based interface similar to the one seen in messaging app TapTalk. Like Snapchat, photos and videos can only be taken in real time, and messages disappear after a specified time limit. 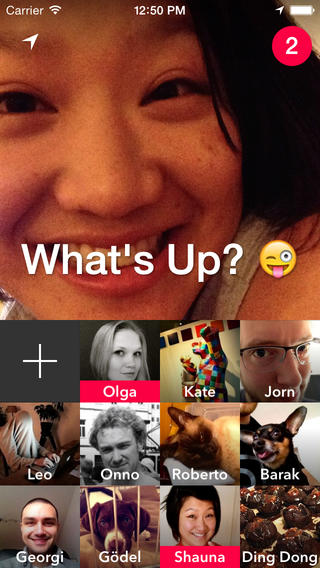 Facebook's new ephemeral messaging app is said to resemble TapTalk (pictured above)​
​
Facebook head Mark Zuckerberg is said to be personally overseeing the project, with Slingshot's development coming after Facebook attempted to buy Snapchat for $3 billion last year. The news also follows Facebook's removal of its long defunct Facebook Poke app from the App Store earlier this month, which was the company's first answer to Snapchat. Originally launched in December of 2012, Poke allowed users to send ephemeral photos, videos, text messages, and "poke" notifications to their friends.

According to the report, Slingshot could be released as early as this month on mobile platforms. Facebook previously launched its news content and curation app Paper this past February. The app was the first product to come out of Facebook's Creative Labs initiative.

Maybe Facebook should consider restoring the Most Recent view to the News Feed -- rather than forcing us to use some convoluted workaround in the More screen -- in the actual Facebook app FIRST.
T

Didn't they do this already with Poke (they that just recently pulled)?
J

This will fail and Snapchat will dominate. End of story.

The way I understood it is that there's a strong emphasis on having your content be temporary on Snapchat.
Whether or not it's bulletproof, it's most prominently popular for "enabling" to forget your worries about some content you may send.

It's interesting to see that Facebook is willing to have another poke at Snapchat..

So Facebook, the biggest data mining company (besides Google, possibly), is creating an app that supposedly allows you to send content "temporarily."

joshwenke said:
This will fail and Snapchat will dominate. End of story.
Click to expand...

True that..... and I look forward to the day when fb reaches "MySpace" status

Yup your dead on. But at least Samsung try's to copy something worth copying...
Last edited: May 18, 2014

djtech42 said:
So Facebook, the biggest data mining company (besides Google, possibly), is creating an app that supposedly allows you to send content "temporarily."

Sorry, I couldn't keep a straight face.
Click to expand...

This! I laughed too
V

crazy as soon as there is an article about a leader, 99% of comments become arrogant. You should really look at leading a more positive lifestyle. Might just turn into one of those god forsaken PC keyboard warriors.


joneill55 said:
True that..... and I look forward to the day when fb reaches "MySpace" status
Click to expand...

not before something new and nice comes along pleaseeee. I would hate to have to give in to Google+. I really don't like the way it works.
C

joshwenke said:
This will fail and Snapchat will dominate. End of story.
Click to expand...

It already essentially has: http://www.macrumors.com/2014/05/09/facebook-removes-poke-and-camera/


djtech42 said:
So Facebook, the biggest data mining company (besides Google, possibly), is creating an app that supposedly allows you to send content "temporarily."

Sorry, I couldn't keep a straight face.
Click to expand...

It already happened before.
D

joneill55 said:
True that..... and I look forward to the day when fb reaches "MySpace" status
Click to expand...

FB is definitely on their way there and every failed attempt to stay relevant will just push them there faster.

Meh failure is imminent fb. Go back to your "timeline" and hide this story w paper and the rest. Just stay where you are and you just might survive.

They should have built a whatsapp clone and paid people a dollar a month to use it. They could pay all users for over 3 years before they matched the price tag.
L

Facebook are such a bizarre company. Either they're total geniuses with some grand master plan or they don't have the first clue what they're doing.

Poke, then Home, then WhatsApp, then Oculus, and now another Poke?

Oh, and while I'm at it - all those notifications everybody keeps getting: "Do you know x?", in a desperate attempt to claw back the flocks of people leaving the site. They annoy the hell out of me and actually make me actively avoid Facebook.

Sometimes I wonder what somebody I knew is doing now and consider Facebook-ing them; then I remember all that notification spam I get and decide to forget it.

They already tried making a clone of this piece of crapp once and failed; why waste time on it again?

They'd probably get more bang for their buck making a Flappy Bird clone, if they have an itch to clone crapp.
C

poke was the first Snap chat competitor by Facebook - what happen to it? - got logged off the other day

Why don't they just add the option to send a photo for a time limited time to Facebook chat? Then, game over, surely? I mean ffs why do you need a separate app for this, all it is is sending a photo that deletes itself, what is the fuss??