Flood of fake/misrepresented apps on the iTunes store

I don't know about anyone else, but I'm really getting tired of new Apps showing up in the store that are grossly misrepresented, padded with fake reviews from hacked/spam AppleID's, and either a poorly ported ripoff copy of desktop game or at worst a complete scam.

Padded reviews are usually pretty easy to spot, example below. 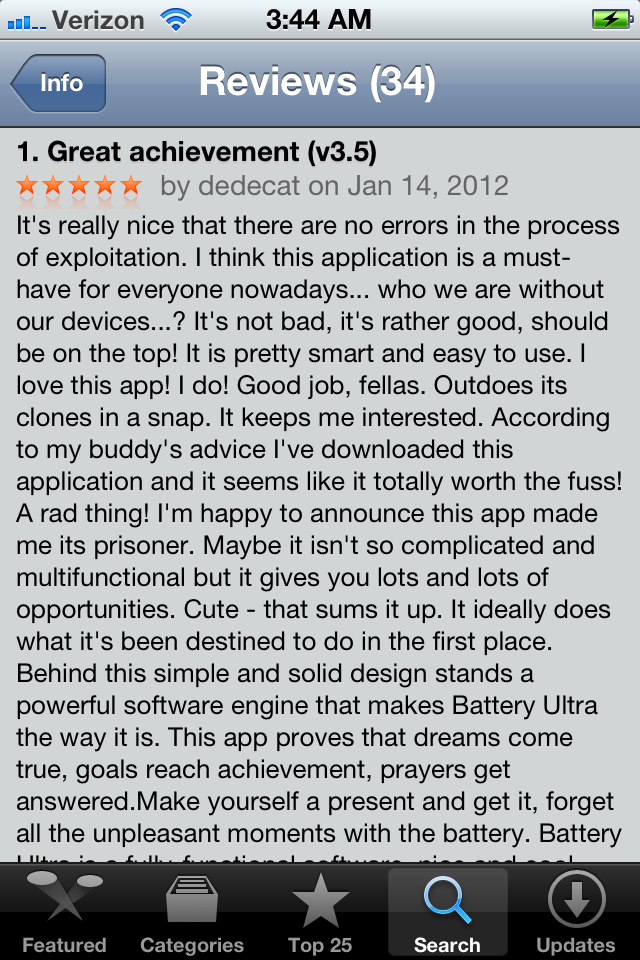 In between the bizarrely worded Google Translate reviews like the above from a different app, you'll find a few real reviews, by people who were suckered into buying the app: 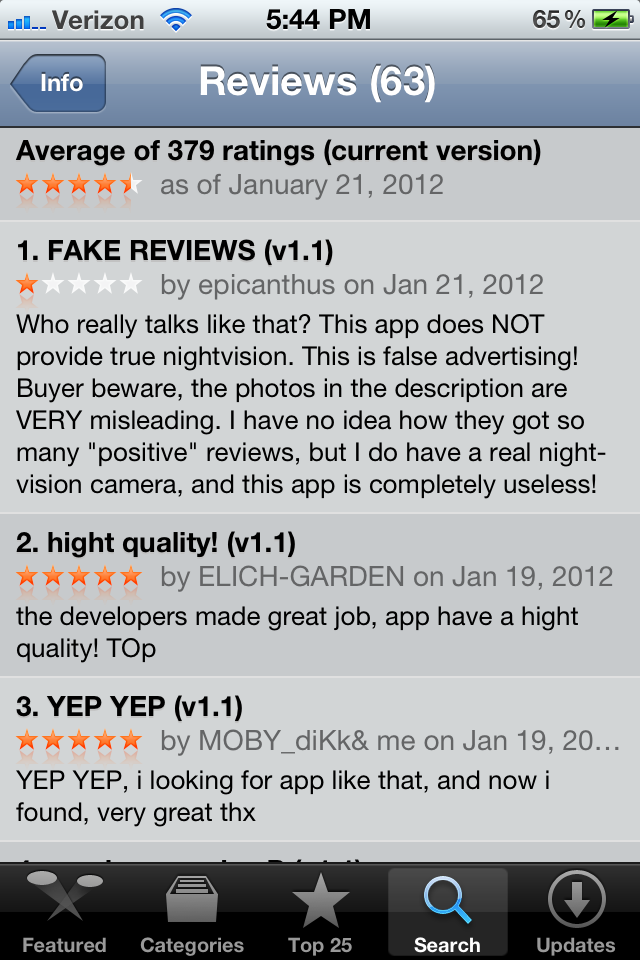 The above is from one of many "night vision" apps currently on the store. Obviously night vision is not something an iPhone is capable of, chose these reviews as a sample.

"As the saying goes, an idiot who believes they can see in the dark by downloading an app and his money are soon parted," but this is just one example of out of many.

Why, when some of these fake apps are in the "Top Sellers" list, is Apple not keeping an eye on this?
P

Well, that's pretty interesting. The 1* review looks very similar (but not identical) to a 1* review that appeared on one of my apps - copy & paste maybe? If so, it's probably a developer trying to trash other apps with 1* reviews while promoting his own with fake 5*s.

And for the record, my app is also a night vision app ("True NightVision"). You're right in saying that the iPhone can't do night vision (it lacks an image intensifier or IR camera + lights) and I'm upfront about that in the app description, but it can get surprisingly close with a 4S. Pitch black is out of the question, but moonlight isn't.

Problem is, a lot of the night vision apps are hugely misleading - I've seen some that do nothing more than show a standard iPhone camera with a green tint. That's nothing like nightvision, it performs worse than the standard camera app, and it's probably about 10 lines of code (9 of which are available in apple's example developer projects!) Yet they're described as offering real night vision by the developer, and get dozens of 5* reviews immediately after each update (followed by a bunch of 1* reviews from real buyers that get marked instantly as 'not helpful' a dozen times).

There's also quite a few nightvision apps that do image enhancement with varying degrees of success - some of them are pretty good, but none of them will get you all that close to working in the dark because you also need to use long exposure modes with the camera to let it soak up plenty of light. No other devs have managed to figure out how to do that so far as I'm aware which is great for me (And for comparison, any other app will do 0.1s 'exposure' plus image enhancement - at best. My app does (in 'max' mode, which requires a steady hand..) 1s exposure plus enhancement, so the camera can soak up 10x more light. This is why it works )

^
Four favorable reviews; 14 negative, single star reviews.
It appears night vision just isn't for the iPhone and the OP app (along with yours) proves it.

I just look at it as Apple giving us the Android experience.
P

braddick said:
Four favorable reviews; 14 negative, single star reviews.
It appears night vision just isn't for the iPhone and the OP app (along with yours) proves it.
Click to expand...

I think there's a bit more to it in the case of my app at least - there are a few things behind the bad reviews:

- Quite a few (5 of the 14 by my reckoning, possibly more) of the bad reviews were from people using the iPad 2. We specifically marked the app as iPhone only, but apple's automated system figured it would run as an iPhone app on the iPad and marked it iPad compatible - which it wasn't. A lot of people bought it without reading the description and found it doesn't work.

- A lot of people just don't read the description before buying and assume it works in pitch black We've even had several complaints that the "thermal camera" mode can't "see through walls" (it's clearly marked as a "thermal image effect"). And even one review ages back that claimed that the night vision mode wasn't much good but the thermal camera worked well and COULD see through walls! (This was before I added new features that improved the night enhancement stuff a whole lot btw).

- The iPhone 3GS. The camera on that phone is really poor compared to the 4/4S, and that really limits what it can do.

- The app wasn't easy enough to use in some ways. In fact looking back, the UI design wasn't nearly good enough. I think a lot of people didn't figure out how to turn on the high power modes, and didn't get to see what it's capable of.

- I'm pretty certain that some of the reviews are from competitors. Can't prove it, just have to live with it unfortunately. I've seen some apps get trashed with *dozens* of fake reviews though, so I'm almost happy that it's not a major issue!

We've updated the app heavily to address most of that (it actually went live about 12 hours ago). The ipad2 issue is fixed, the UI is massively improved, and the description on the store has been changed to make it as clear as possible what people should expect from the app. We'll have to see what the reviews are like in a week or two.

As to whether night vision is suitable for the iPhone? Depends on your expectations. If you understand that the camera is tiny and designed for daylight usage, and you have an iPhone 4S - then actually the results are pretty amazing. If you've been watching some hollywood crap and expect an iPhone to perform as well as a hollywood-enhanced version of military hardware costing thousands of dollars, obviously it'll be a massive disappointment. But hey, at least the thermal camera mode can see through walls

fake reviews is a very bad thing. Thats pretty much how I tell if something is worth the time and I dont waste my money. apple really needs to crack down on this. down with crap applications with positive reviews used to generate cash.
You must log in or register to reply here.
Share:
Facebook Twitter Reddit Email Link
Register on MacRumors! This sidebar will go away, and you'll see fewer ads.
Sign Up
Top Bottom