iPad Folders in the dock.

In iPadOS pb4 I can no longer drag apps from folders in the dock into slide over or multitasking view.
Once an item has been taken out of the folder it is not possible to put it back where it was.
Anyone else having this problem? 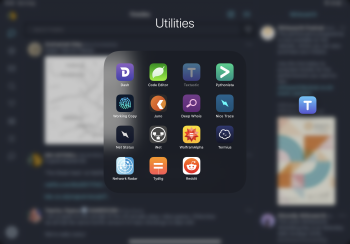 Cant modify folders when placed on Dock.
Unable to move an app icon within Dock folders, as it will then go to Home desktop.
Cannot add an app to a folder if the folder is on Dock.

Now, I have to move folder off the Dock, make changes, then move folder back to the Dock.

happens on iPad OS as well whether choose more or less icons grid layout, both light and dark mode.

I have apps in four folders on the Dock and a clear desktop.
(I would prefer apps not be forced to upper left corner of the screen and allowed to be free form and start at bottom, or along the sides.)

Goes beyond issue you have with multiple windows and tasks side by side.

this is what my dock looks like so my desktop is sans app icons or folders. There was an issue at one point where it had to have at least one icon (app or folder) or the home screen would crash.

I am having the same problem. I have submitted a bug report to Apple.
Reactions: Bolehillbilly

Anyone else still having problems with folders in the dock? Now also having trouble with the “recently opened” apps.
M

I’m not experiencing problems with folders in the dock. I have the 2018 iPad Pro if it helps and no icons on my home screen. All my apps are on the dock and in folders.
You must log in or register to reply here.
Share:
Facebook Twitter Reddit Email Link
Top Bottom