An update to Google's iOS Gboard app today has introduced 3D Touch into the third-party keyboard, letting users move the cursor by hard pressing and sliding their finger around the keyboard to pinpoint the location they want to land. Gboard's 3D Touch lacks the free-floating cursor of Apple's stock keyboard, however, and simply moves left and right throughout a message, without the ability to track upwards and downwards.

The version 1.2.0 update has also added support for Apple's new iOS 10 emojis, as well as the ability for users to search and share their contacts directly from within the keyboard. Anyone who wants to use the feature must first go to the Gboard app, tap "search settings" and activate "Contacts search," and then they'll be able to access their iPhone contact list directly within Gboard in Messages. 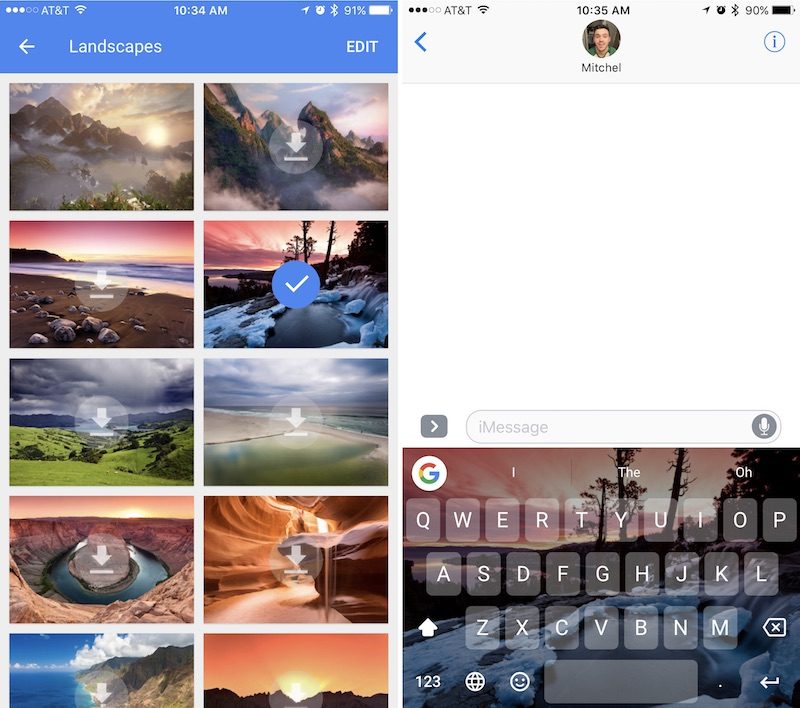 The app has gained new themes as well, including a collection of new "Landscape" images that users can download and add onto Gboard with the tap of a button. When it launched in May, Google touted Gboard's advantageous ability to perform Google searches directly within the keyboard of Messages. Apple has made a big deal out of similar abilities in Messages with its new Messages App Store in iOS 10, where users can install smaller-scale apps to find movies, make dinner reservations, and place stickers.

Gboard can be downloaded from the iOS App Store for free. [Direct Link]

What an useless feature (backgrounds) to add.

-They should change that emoji icon for an comma.
-Make it easier to switch languages.
-Shortcuts for "?" and "!"
-Resizeable keyboard.

Path Input has all the features you could possibly want. Unfortunately the swiping is not precise and you'll end up having to correct the text all the time.
Reactions: S G and Good User Name

"We won't target ads based on what you type! Promise!"

Good update. Would be a permanent switch for
me if the 3D touch cursor allowed text selection like the stock keyboard
Reactions: Good User Name
C

street.cory said:
"We won't target ads based on what you type! Promise!"

I love gboard. when it came out I switched and haven't looked back.
Reactions: FoxyKaye and Good User Name

Aside from many who don't use dictation.
Reactions: miknos, rezzo and 69Mustang

I found Gboard a little cumbersome and I've switched back to the stick keyboard on iOS 10. Never know it may change but for now this one does everything I need
G

This is the single biggest reason I use 3D Touch, and if I never use it for anything else, cursor movement will have been worth it.

Best keyboard out there personally! Just would be nice if they could add a resizable option.

street.cory said:
"We won't target ads based on what you type! Promise!"

Let's hope not. I much prefer seeing irrelevant and completely unrelated adverts that are of zero interest to me.

They could tie using your IP easily if they wanted.
The keyboard works fine without full access. I find that search inside the keyboard not useful. Some will but I prefer not to risk my privacy.

It's a good keyboard, but I never really used or found a use for the Google search part, and I like SwiftKey too much
J

Gboard is worth it for "Glide Typing" alone. It's kind of stupid the amount of people that continue to worry about their privacy with all these things. You want privacy, then don't use technology

I really want Swipe functionality on an otherwise solid Apple keyboard. But this update just further cemented my usage of GKeyboard. Love it except the hiccups from iOS on third party keyboards.
J

Did they improve the word recognition? I finally uninstalled it because I spent more time correcting the misspelled words than actually getting any typing done. The stock keyboard works better for me.
C

GBoard already had a nifty cursor placement feature by simply swiping left and right on the spacebar. The 3D touch implementation, in that respect, seems a little redundant...am I missing something?
Reactions: jamesrick80
C

CAO 303 said:
GBoard already had a nifty cursor placement feature by simply swiping left and right on the spacebar. The 3D touch implementation, in that respect, seems a little redundant...am I missing something?
Click to expand...