How close to Retina Display is the cuurent 17" MacBook Pro's display?

Hi there! Bought a 17" MacBook Pro a little over 40 days ago and have been extremely happy with it ever since! There's nothing this awesome machine can't do for me! Now with that being said, there are of course the rumors that the new MacBook pro's coming out will have Retina Display in them. To be honest, this is the only new rumored feature that I really care about as it's quite a switch going from the ipad 2 to the ipad 3 with Retina Display. However, I have that the 17" MacBook Pro's screen is already high definition and close to being Retina Display in its own. So my question is, is this true? Does the current model 17" Screen already resemble something close to a "Retina Display"? I'd say no looking between my ipad 3 and my macbook pro but it could just be that they look different on a computer as opposed to a ipad. If it's not, then i'm still within Best buy's return period for silver members and would be very sided into returning it and waiting for the release of the Retina Display macbook pros.

Apple's site has a formula, I think. It's either that or they provided one during the Apple keynote introducing the iPhone 4.
Comment
N

According to TUAW, it already is "Retina" but many members on this site have scrutinized their calculations, pointing out certain mistakes with TUAW's calculations, so take it with a grain of salt

Dummy question: Can an existing screen be upgraded to Retina via software?

Arelunde said:
Dummy question: Can an existing screen be upgraded to Retina via software?

No, since you have to physically increase the number of pixels.
Comment

Retina as defined by Apple is a resolution fine enough that the human eye cannot distinguish between adjacent pixels.

As for what resolution they pick? That depends on what the HD4000 can drive without hindering performance really. I doubt there are several panels to choose from on this.
Comment
S

"Retina" isn't a fixed DPI. It's a function of both DPI and viewing distance. That's why a 1080p TV looks pretty good from across the room on your couch but when you walk to within a foot or two of the TV you can see the grid of pixels.
Comment

Arelunde said:
Dummy question: Can an existing screen be upgraded to Retina via software? Just wondering...
Click to expand...

Definitive answer: it depends on your minimum separable visual acuity, display contrast (if you have shi*ty contrast, high pixel density is a waste since you can't perceive it) and viewing distance.

We'll make a guess about all of these.

Personally, my minimum visual acuity at my display is 28.8 arcseconds (0.48 arcminutes)

If you want to take a test on your display, tell me and we'll calculate your minimum visual acuity.

But for now, let's make a guess and say your eyes are not that healthy and you're not that young and let's say your visual acuity is 36 arcseconds (0.6 arcminutes).

For your display, we'll assume display is capable of reaching normal contrast values.

That is, at guessed minimum separable acuity of 0.6 arcminutes and viewing distance of 26'', you need same display with resolution on 3100x1938 pixels.

If you want more precise calculation, we need to hear from you.
Last edited: Jun 6, 2012
Comment

I don't even think your liberal usage of quotation marks allows you to make wrong statements like that.

I updated a post I way back with an new image to get the message across. So I'll post it here for the extra kudos

Note: this chart is a simplification, but it gets the message across: 'retina' isn't an arbitrary fixed PPI regardless of typical usage distance. Also, see the post above this one.

There's a whole can of worms when it comes to capturing content that is 'retina'. If we assume one arc minute is the limit of visual acuity and we take into account the Nyquist theorem, then at a basic level we might be able see differences up to half of one arc minute. So taking that theory, we would see benefits of higher resolution all the way up to 600+ DPI for people with perfect vision. Read here. 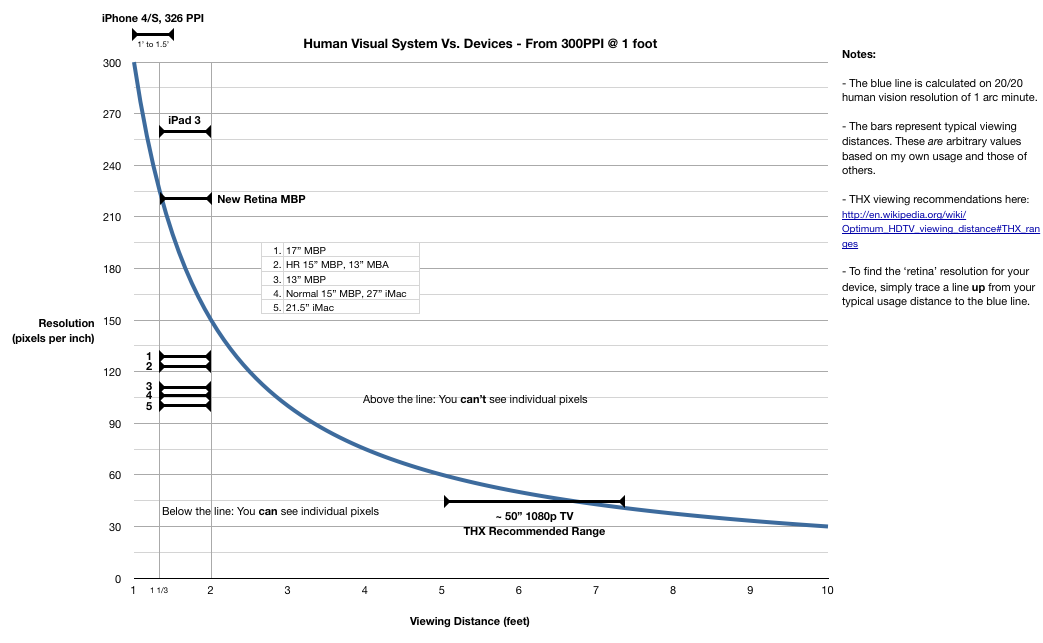 sammich said:
I updated a post I way back with an new image to get the message across. So I'll post it here for the extra kudos
Click to expand...

Hey sammich, very, very nice graph, you get a +1 for that
There are a few things wrong with it but if you correct them, it will be one hell of a graph regarding "Retina displays".

3.) About HDTV viewing distance - it is expressed in degrees of [person's] horizontal field of view which display occupies. Lower limit is 20° (10.3 ft for 50'' 16:9 display) but upper limit is currently only limited by resolution! That's why, one of the improvements that comes with 8K TV's viewing angles greater that 40°. Quoted figure is 100° for future ultra-HDTV's. For a 50'' 16:9 display, 100° viewing angle would be even 1.524 ft. Of course, no one would sit this close to display, so this figure of 100° is meant for larger displays. You see where I'm going with this?

1) I had to choose a baseline for the chart and to keep things simple, and general, the commonly accepted value of 1 arc minute of acuity is good enough for the purposes of the chart.

I haven't searched for data on how visual acuity 'degrades' with age but one could assume that for the range of all smartphone users, young and old, it would be an acceptable starting point.

3) Yes, I came across those points in the linked wikipedia article on optimum viewing distances for HDTV's (typically 1080p). The range is 20º-40º of the HFoV and I wouldn't expect one to journey too much beyond that for any display. For large FoV display placement, the article also mentions motion sickness in viewers. DPI should take acceptable, real world scenarios. I mean, the technology is there, why not just make an array of iPad 3 panels to 50" and call it a day? Because it'll be far beyond the people buying it's needs.

If I've missed your point, then you might have to come around for a second pass.

You raise a lot of facts that I'll have to read into later, but it's important to note that real world usage scenarios these numbers don't mean much as you approach a certain point. Take for example the Samsung GS3, it uses the 'awful' pentile subpixel arrangement in a 4.8" screen for 306 DPI. Even with less sub pixels, most reviewers have praised the screen and that one can barely see the pixels. And for most devices, anti-aliasing can artificially bring smoother details to text beyond the physical capabilities of the screen.

4) That line, is in hindsight, a bit of a throwaway line. It was the original wording I used because it suited my original audience, and because it more or less suits the needs of the discussion. It's not absolutely true, as you point out, but it's close enough.
Last edited: Jun 6, 2012
Comment
You must log in or register to reply here.
Share:
Facebook Twitter Reddit Email Share Link
Register on MacRumors! This sidebar will go away, and you'll see fewer ads.
Sign Up
Top Bottom