How many bug reports did you file, yet?

You are using an out of date browser. It may not display this or other websites correctly.
You should upgrade or use an alternative browser.
V

just curious to know how many bug reports did you file until now?

I’ve been with the Public Betas since iOS 10 and installed it for 11 on day two. Until now I filed more than a dozen reports (plus one for tvOS).
I really try to file every single thing I find.

With iOS 10 they got rid of 100% of the bugs I reported and checked back with me on half a dozen things.
If the bug report numbers are per case reported I’d say the got more than 100.000 bug reports in a week. Seems they have lot of work ahead until fall.

If you catch the message, google photos states that the photo(s) in question are not supported. I wonder if google will provide an update for that.

At least for me, it's the new format that is being when saving photos that's causing the issue.

Over a dozen reports for me since Beta 2 Update 1 alone. Doesn't include Beta 1/Beta 2.0
Reactions: KeanosMagicHat
S

Google Photos uploads new photos on my 6s and beta 2. No issues.
P

The main reason I use Betas is a selfish desire to make sure that Apple gets proper feedback on the bugs that affect me the most. If I’m on the beta I know that at least one person sent them a report.
Reactions: KeanosMagicHat

I am on public beta 1. Any other public Beta 1 having problems uploading camera photos to Google photos?

I've been on the public beta since Friday afternoon and have sent three feedbacks so far. Had Super Mario Run freeze intermittently and the Notification Center was unresponsive, the other feedback was just general feedback.

Two for me. One for the message app crashing and one for closing out apps.

About 7, but 3 are suggestions for UX tidy up or behavioural stuff. They really do listen and pay attention... for example, it only took 16 months for them to implement my app alias suggestion as Offload Apps

(I can’t take credit, but I did submit the suggestion in April 2016 haha) 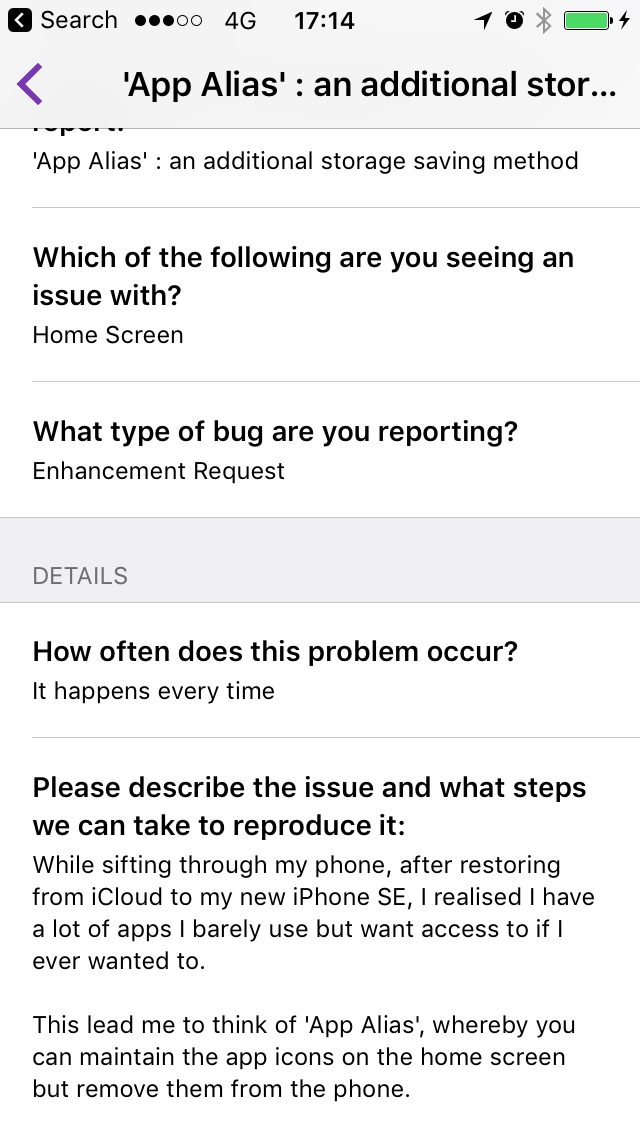 Everyone should suggest and report everything they think of.
Reactions: VSG and KeanosMagicHat
V

Reason I’m asking is this:
Immediately after a Beta release people post on this forum things like “downloading now ...” or “I probably shouldn’t but I’m installing anyways ...”.

Two hours later it reads: “I encountered bug! Reverting back to 1x”.
Hardly ever do I read “found a bug, reporting it now. Can anyone else confirm and report so Apple can sort this out?”

I mean, that’s what Betas are for, after all.
Reactions: Kristi2, DiscoMcDisco, eagle_man and 3 others

VSG said:
Can anyone else confirm and report so Apple can sort this out?”

I mean, that’s what Betas are for, after all.
Click to expand...

Agreed. I can’t understand why people get upset about bugs in Betas. That’s part of the reason for Beta testing is to find the bugs and report them.
Reactions: DiscoMcDisco and VSG
B

Thats because your phone does not take pictures in the new format, but still in JPEG, which Google supporte.
You must log in or register to reply here.

Problem with Movies on iPad/iPhone and iOS 14

Apple Confirms 'No Longer Shared' App Bug Has Been Fixed