I like the change in connector on the new iPhone

Why? Because it makes it much easier to use the iPhone while it is plugged in. The old one took a lot on one side so it was more awkward to use the phone when it was plugged in.

I also love the new connector. I just hope it's functional and still allows audio and video out.

Yeah audio out works. It works on my USB iPod adapter in my car

tigress666 said:
Why? Because it makes it much easier to use the iPhone while it is plugged in. The old one took a lot on one side so it was more awkward to use the phone when it was plugged in.
Click to expand...

Uh, yeah I don't think anyone has complained that it's too hard to plug in, most complaints were about the fact that none of their accessories work any longer without an overpriced adapter.

Just release the adapters apple. Great excuse to buy some new docks and speakers when they come out too.

I love the Lighting cable.

Sure, I have tons of old 30pin connectors but it's been around a decade with the same plug. It's time to advance technology.

I love the fact I don't have to worry about what side is up. I love the solid "click" when you plug it in.

Me too. Way nicer to align and insert than the old one. Especially in the car! Now just need to order a couple more usb cables. When I look at the adapter that is offered, all I think of is how much extra stress this could put on the phone connection if it was bumped.
B

johndallas999 said:
Uh, yeah I don't think anyone has complained that it's too hard to plug in, most complaints were about the fact that none of their accessories work any longer without an overpriced adapter.
Click to expand...

"Uh, yeah" OP didn't mention ease of plugging it in.. I agree with him the smaller plug makes it more comfortable to use while plugged in.

Also much prefer the new connector. I often plug in to charge in the dark and its much easier.

I also found the old connector tended to pull out slightly on one side if the cord was pulled on (like bringing the phone to your ear) while the lightning fitting just stays straight.

I'll like it more when there is a desktop / alarmclock dock I can buy.

I'll like it even more when I can buy a lightning cable on monoprice for <$5.
A

Just curious, how tight is the connection? Is it as tight as the 30 pin, when plugged in?
T

johndallas999 said:
Uh, yeah I don't think anyone has complained that it's too hard to plug in, most complaints were about the fact that none of their accessories work any longer without an overpriced adapter.
Click to expand...

I think that is sadly a biproduct of change. I'm not complaining cause it's not like Apple does this every year or two. They've had the old one so long it was bound to happen sometime and yes it sux but you can't expect them to never change it either. It's not even like they could have kept the old adapter and kept the iphone the same, iFixit confirmed there would be no space for the old adaptor in there. And I for one also like the light weight as it makes it easy to hold with just two fingers (and a case with a good grip on the sides ) and feel I have a good grip on it. And the thin shape means it fits in my purse a little better than the old phone despite being a bit longer.

Though it's easier for me, I only have one device that might be affected. But I'm not sure there will be a new one even if it doesn't work with the adaptor (it's a mod to my car's radio to let me control an ipod through the radio controls. Seeing as my car now is almost 10 years old I'm not sure they'll bother making another mod for its stock radio or not). At least I usually just use an old ipod for it (Though it is nice to use for my Navigon app so I can listen to music over the car's speakers and have the Navigon app speak through my car's speakers).

But really my big point here was at least there were tangible advantages besides them being able to make the phone in its current form factor. It really does make it a lot easier to hold while plugged in and I do use my phone when I have it plugged in. And, um, where did I say anything about it being easier to plug in? I said it was easier to hold while plugged in. When you play games that suck your battery life, sometimes you don't want to unplug it if you happen to be home as games suck battery life. And the old connector really made it uncomfortable to do so.


BlueKhufu said:
"Uh, yeah" OP didn't mention ease of plugging it in.. I agree with him the smaller plug makes it more comfortable to use while plugged in.
Click to expand...

This new plug really does feel like it is more secure inside the phone. It allows my hand to hold it more naturally when I'm charging it as well. I usually rest my pinky underneath the phone and the 30 pin was always just barely in the way enough to be annoying. I'm so far happy with it, but now I just need more so I can keep one plugged in in my room and one in my car.

must admit, i like it too. and i like the design, with the ball bearing type slots that hold it.
F

I love it. So much easier to plug in and I don't have to worry about direction. Plus it feels nice and solid and I like the reassuring click. Although I wouldn't be opposed to having a MagSafe type connector on the iPhone/iPad...I think that could be cool and useful.
S

yeh i completely agree with you

At my local apple store.. lol. 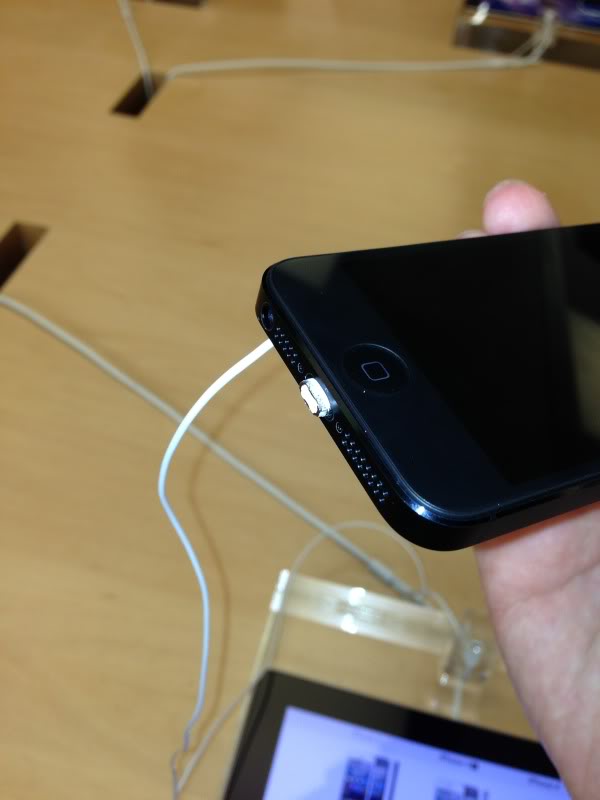 I like everything about it except the fact that I can't video-out. I loved listening to live versions of songs on YouTube while driving to and from work through my car's speakers, now I can't do it because of no video out!
J

Bigads said:
Great excuse to buy some new docks and speakers when they come out too.
Click to expand...

I'm switching to all airplay now. Earlier this year I bought a $75 Sony dock for my receiver and a very nice $120 alarm clock--both now useless. With AirPlay on my receiver and bedroom speaker I'm done with docks.

The only thing that ticks me off is the lack of adapters on release day, and I dont have an Apple store close, so will wait till the iPod is released and I take my son down to get one.

I wont change docks yet as we have 3 other iPhones in the house that can use them for now, but I will get one for beside the bed one day. I would have liked a better price on the adapters too, but it is Apple, so.....

Overall I am happy and today when plugging in the daughters iPod Touch, iPad 1 and iPhone 4, and getting all 3 connectors round the wrong way first time, I did think of how easy the Lightning connector really is to use
S

I really need an adapter, Ive got a dock which is currently unusable
B

My humblest of apologies.

The cynic in me says that was probably done on purpose by someone who doesn't like Apple, (like an S3 user ) who happened to walk past an Apple store and decided to do a little sabotage.
T

daviddth said:
I would have liked a better price on the adapters too, but it is Apple, so.....
Click to expand...

Yeah, this is the thing that ticks me off. Honestly, I think Apple really should have at least included one adaptor at least on the first generation of devices that use this connector to kinda soften the blow to the many who have accumulated stuff that uses the old. Or at least not priced the adaptor at 30 frikkin bux!! I wouldn't complain at all (even for not including an adaptor) and would have been completely happy if it was 10 bux like the original rumor (yes, I know, it's Apple, they wouldn't actually be that nice).
You must log in or register to reply here.
Share:
Facebook Twitter Reddit Email Link
Register on MacRumors! This sidebar will go away, and you'll see fewer ads.
Sign Up
Top Bottom