That's what IDC is guessing. 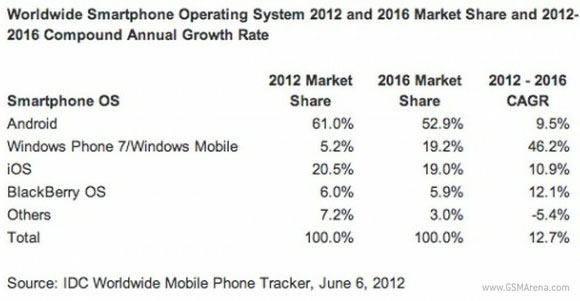 See their prior predictions.

I think its laughable given the current distrust of Windows and loosing ground with what it does have.
Add to it those stupid and insulting "smartphone beta tester" commercials (make us all look like idiots).

Still, Windows is the dominant computer OS, and Microsoft does have deep pockets, they do have the potential to make a significant comeback if they play it right (not that I have seen any right moves).

One person noted MS is in better position to make an integrated environment then Google, doing a similar Desktop/Laptop-to-SmartPhone linking (via SkyDrive) then Google (can which currently has a marginally useable OS product in its Chrome OS).


IMHO, Android will suffer far more then iOS, becuase MS can actually produce something close to what Apple has built with that they have now.

That is IF MS can convince people their new OS is really as good as they promise.

I read this myself. What I don't understand is what they are basing this on. If windows 8 has a successful kickoff, and WP8 ties into Windows 8 extremely well, I think WP will see a boost in sales though.

There was a time when people laughed at Android too. In tech space virtually anything is possible. Successful businesses can crumble under a competitors weight overnight. Not saying this will happen, per se, but it is a quickly changing market.
Comment

Blackberry OS having any sort of growth at all? It's not really happening right now...
Comment

robbieduncan said:
Blackberry OS having any sort of growth at all? It's not really happening right now...
Click to expand...

Their new OS, set to launch this summer, is pretty much their hail Mary. We will either see RIM rise from the ashes, or crumble and be picked apart (for patents, etc.) by their competitors for pennies on the dollar.
Comment
R

Yeah they are doing good but how about we just wait and see, how about that....
Comment

Yeah they are doing good but how about we just wait and see, how about that....
Click to expand...

If everyone took this approach, the idea of the stock market would be virtually pointless.
Comment

He. Unless they allow objective C apps, they'll always be that pathetic "-0.4%" on the bottom of usage charts.
Comment
R

lordofthereef said:
If Brokers/Investors took this approach, the idea of the stock market would be virtually pointless.
Click to expand...

These analysts are a joke. Every prediction they have had in the last 4 years have been wrong. No one pays attention to them any more. Hell, according to them, iOS marketshare should already be less than WP7.

Some of the analysts were long time M$ employees, so it stands to reason why they predict everyone else to fail while the wp is always on the rise.

Hell, here s what these idiots predicted just a few months ago. 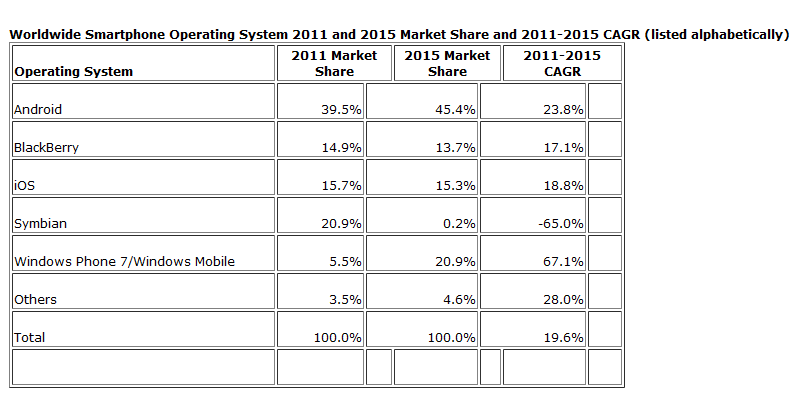 RenoG said:
Fixed it for you...
Click to expand...

the fact that BB is even on the list makes it all BS to me.

Blackberry treated me well back in the day- but they were overshadowed and overpowered by Apple and Google with virtually no fight. I don't see RIM phones still being around in 4 years, sad to say.
Comment
C