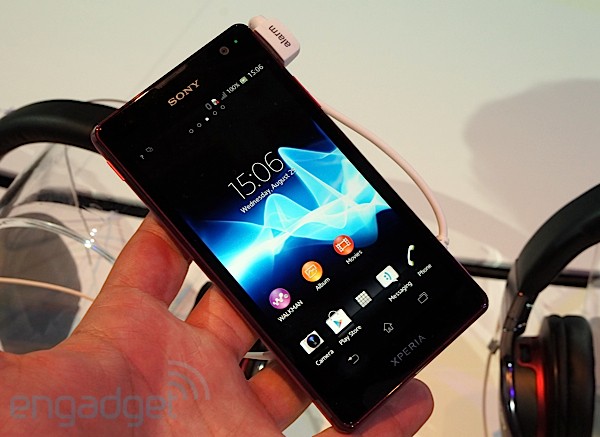 ​
Sony just wrapped its IFA 2012 press conference, but not before ushering in three new members to its Xperia mobile line. The breadwinner of the pack, the Xperia TX, is the company's new smartphone flagship, outfitted with a 4.6-inch 720p HD display powered by Mobile Bravia Engine, 13-megapixel rear camera capable of sleep-to-snap fast capture and NFC functionality. We got a chance to handle the very vibrant metallic pink version of the device, so follow on after the break for our first impressions.

The CPU residing inside the Sony Xperia T is the trusty dual-core 1.5GHz Snapdragon S4 KRAIT with Adreno 225 graphics, so you are unlikely to feel underpowered with it. NFC is thrown into the ring here, too, for sharing media, files and mobile payments. Thankfully, we have a microSD card slot here, to supplement the 16GB of internal memory.

​
First things first, when you pick up this Android 4.0 ICS handset you notice its extreme lightness and that's because the TX weighs in at 127 grams (about 0.28lbs). Though this is undoubtedly the company's premium device (the T announced on stage is the Germany-only model), it has neither that appearance nor in-hand feel. That could be due to its slim profile, but there's also a disconnect between its high-end specs and actual performance. In our brief time with it, we noticed an extremely visible lag when attempting to rotate the home screen from portrait to landscape and that same sluggishness was evident when we attempted to access the app drawer.

Oh, let's not forget that the Xperia TX will be the new phone of James Bond in the upcoming movie, just as rumored. The Xperia T should be available as soon as next month, since Q3 is the official release schedule, and in some markets it will be launched as the Xperia T, with slightly altered exterior. 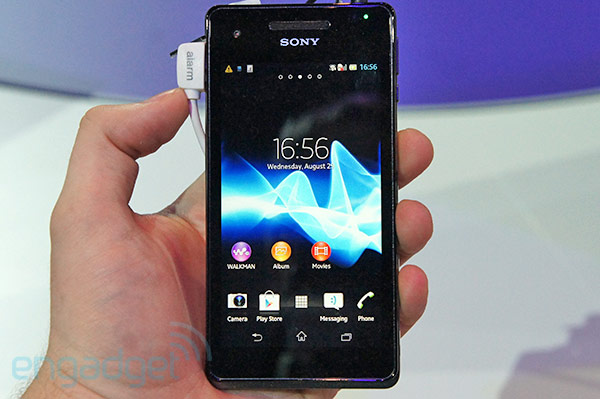 ​
The slightly shier Xperia V was mentioned ever-so-briefly in Sony's IFA presser -- but that's not to say there's nothing to see. We've just got our hands on with the firm's newest LTE handset, and it's a lightweight 127 grams, comes with a 4.3-inch, 1,280 x 720 display and boasts iPx5/7 water resistance. It's also packing Sony's new ClearAudio+ technology. It's got that familiar Xperia curve, which we like, plus a rough silver finish around the edge. Check out our hands-on video after the break, with more impressions coming soon.
Sony Xperia V hands-on

​
The 1.5 GHz Qualcomm MSM8960 dual-core processor inside the Xperia V proved plenty capable, with that high-resolution screen offering space for on-screen Android 4.0 buttons. It's an Xperia kind of Android, though, with similar widgets and drop-down menu adjustments, but it's all inoffensive enough. There's also raft of Sony's new Android widgets that we'd soon drop from our homescreen-- but again, it's an easily-solved problem. It also packs the same 13-megapixel sensor we saw on earlier on the Xperia S, although we'll have to wait for the final review model before we can compare results. The Xperia V will offer in pink, while and black paint jobs when it hits stores later this year.
Last edited: Aug 29, 2012
A

if you want android, there is only samsung
Comment
Z

Too little, too late. These models pale in comparison to the HTC/Samsung and even LG flagships this year. Samsung's and HTC's models have already been in the market for months now.
Comment
T

Personally I think the T model (flagship) looks pretty awesome, and I've always been a fan of Sony's Walkman devices which they've seem to built into these new models.
Comment

Early benchmark scores are in for the Sony Xperia T, TX and V

​
We've already benchmarked the Galaxy Note II and the ZTE Grand X IN at IFA, and as the week wraps up we're circling back to test the mettle of other handsets announced here in Berlin. We ran mobile benchmarks on Sony's new flagship Xperia T, the Xperia TX (the US version of the T) and the LTE-enabled Xperia V. All three devices pack dual-core Snapdragon S4 Krait processors clocked at 1.5GHz, and they're currently running Ice Cream Sandwich -- though a Jelly Bean update is reportedly on the way. Meet us past the break for a first look at how these smartphones stack up.