I have successfully installed several single Eve Light switches around my house but I cannot seem to install two switches (not a 3 way - just two switches that control two different lights) in the same box. I can always get one to work, but the second one never works. It has been a while since I have tried but my family is gone for a couple of days and thought I'd give it another try.

Or is there something else I am doing wrong when it comes to two switches in the same box?
W

Generally neutrals should all be "bonded" meaning they are all connected to each other.

it sounds like you're somehow been routing power for one switch through the other, which is really bad, and potentially dangerous.

all 4 of those neutrals should be connected to each other.
it looks like those switches come with wires sticking out of the back, the neutral wires from the 2 switches should connect to the other 4 neutrals.

If anything I'm about to say about to numbers of wires doesn't match 100%, ignore all of it, post a pic with things as spread out as you can.

Electricity is deadly, and done improperly can cause fires. If you're the least bit unsure about any of this, do not proceed, and do not turn that breaker back on if you've changed anything.

If you're uncomfortable with this, and have a friend who's handy, it might be best to have them come over for a bit (should be under an hour), you can distance yourself from them in your house. and send them home with a 12 pack or a nice bottle of something (or another appropriate gift)
even if you just want to have them check your work before turning back on.

the neutrals
1 - from the breaker box
1 - to next switch
2 - one from each eve switch (white wire)
2 - one from each of your lights
all 6 of these should connect, you'll probably need a bigger wire nut (Red would be optimal) (color indicates size)


now, you should be left with 2 "load" wires, which carry the power up to each light.
hook 1 load wire to 1 red wire from a switch
and hook the other load to the other red.

in addition make sure all of your ground wires are connected to something that's grounded.

with as full as the wire nuts are, after you've installed them, and BEFORE RESTORING POWER
give them a gentle tug to make sure they're on firmly.
After the tug get a flashlight, and look for ANY signs of metal around the base wirenut or small wires sticking out of it, there should be NO exposed metal of any kind. if the wire is made up of smaller wires, even one of those smaller wires sticking out can cause problems.
a couple wraps of electrical tape (no other kinds of tape) around the base of the wirenut can help.

Wirenuts seem easy, and they are, but please check the net for basic instructions as to sizing and how to properly twist wires. with as full as yours are going to be, and the way you're going to have to jam everything in the box to make it all fit, there's a decent chance you can pull a wire out accidentally.
It's just how it is with the size of smart switches.
Comment

Only thing I will add is that many ground wires are bare wire, particularly in Romex cable. The bare wires connect to green ground wires. All grounds in a box need to be bonded together and connected to the box if it’s metal.
Comment
W

glenthompson said:
Only thing I will add is that many ground wires are bare wire, particularly in Romex cable. The bare wires connect to green ground wires. All grounds in a box need to be bonded together and connected to the box if it’s metal.
Click to expand...

Thanks for the replies all.

I totally get the need to err on the side of caution - hence the fact that I have started and stopped this project a couple of times. I do have a buddy who could help me, but I kept thinking I could figure this out since I have been successfully adding single smart switches

One of the many problems with the wiring in my house is that wire color was a complete afterthought on a "box" by "box" basis. For example, the box in the pictures below, for my kitchen, are mostly all black. Luckily the "dumb" switches work as and when I replaced the dumb switches several years ago it was a simple wire for wire swap out and no need to use the neutral wires.

The neutral wires are bundled together with the yellow caps. 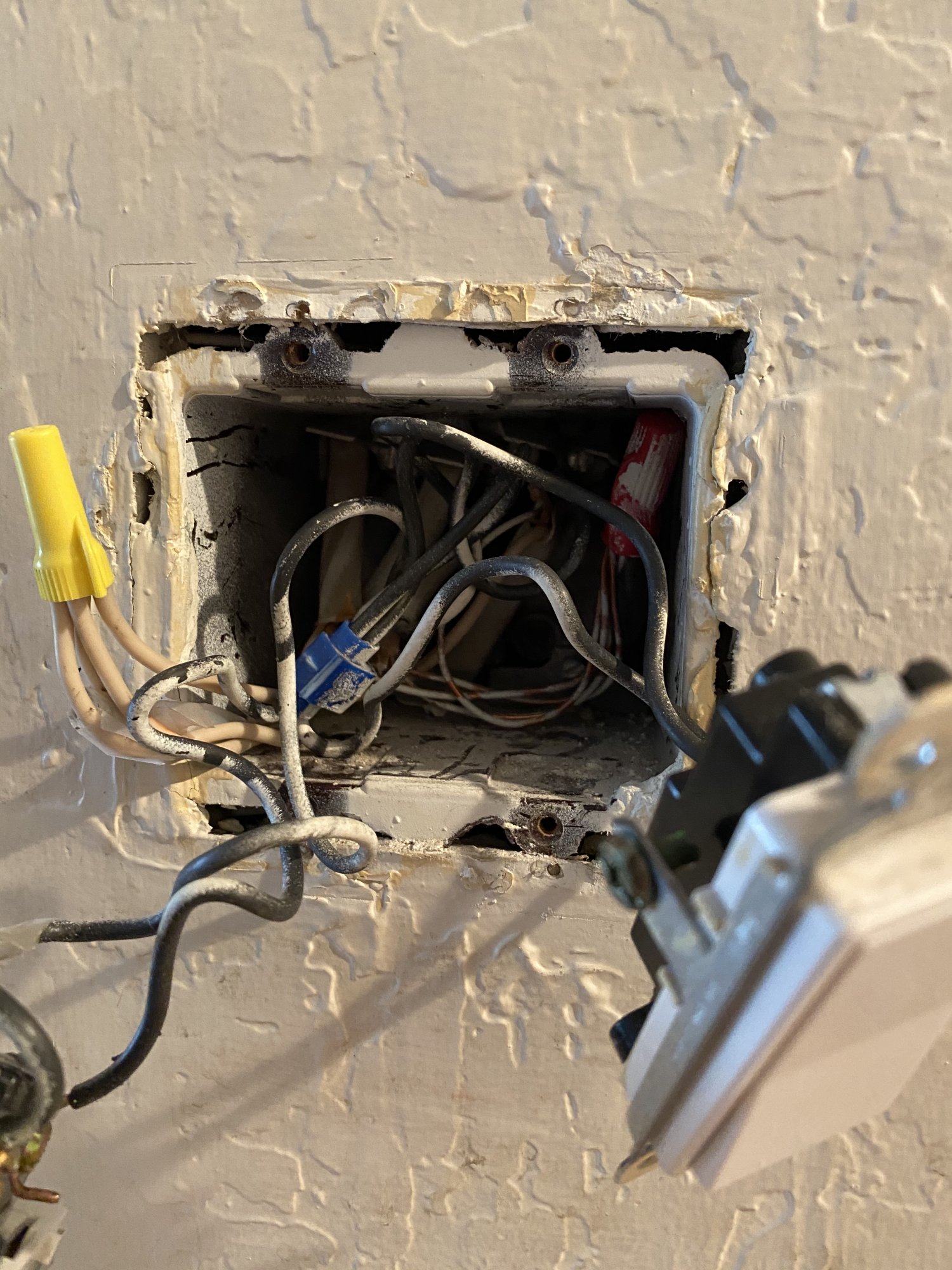 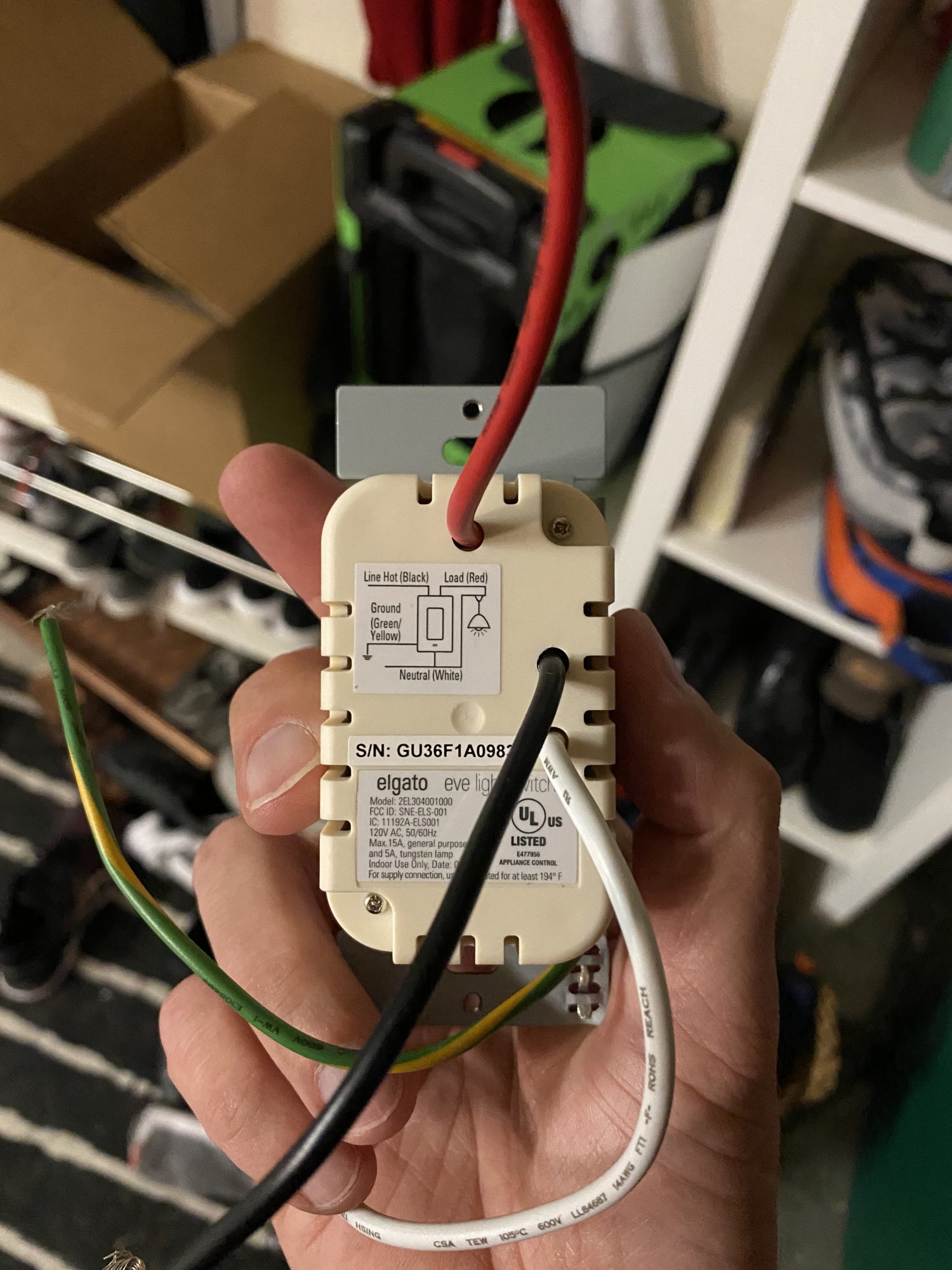 can you try forcing the flash on your phone?

if the switches in your kitchen just have the black wires, then it's proper for them to all be black
the white is up in the light fixture,
and the black loops down to the switch and back.

Do you have a multi meter? You need to differentiate the line and load on each switch. A dumb switch doesn't need constant power so no F's were given when breaking the wire coming from the panel (line) and going to the light (load).
Comment
You must log in or register to reply here.
Share:
Facebook Twitter Reddit Email Share Link
Register on MacRumors! This sidebar will go away, and you'll see fewer ads.
Sign Up
Top Bottom