is this the damage you get from dropping an iphone ?

This is my daughters iphone that she says she simply dropped, I think it looks a bit more serious than that, whats your views ? 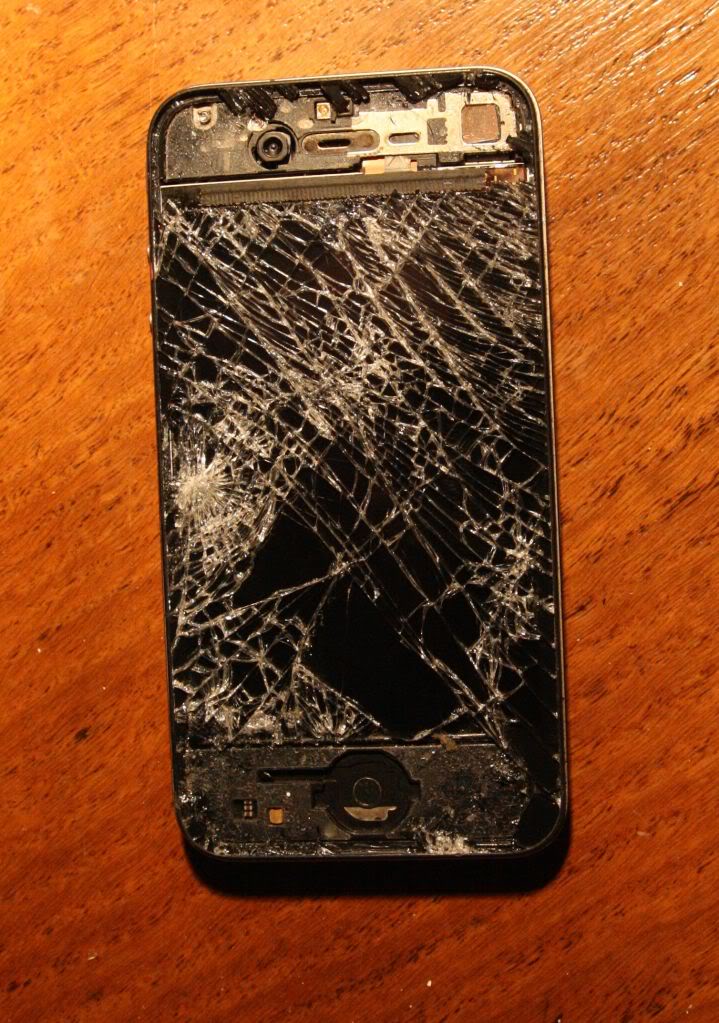 liquorice said:
This is my daughters iphone that she says she simply dropped, I think it looks a bit more serious than that, whats your views ?
Image
Click to expand...

The glass shatter on the screen is similar to what i saw when i dropped my iPhone from about 5/6 foot, if not a little more widespread, mine was mainly isolated to one half of the screen. Not sure about the whole top and bottom segments "falling" off though, that doesn't look like a "simple drop". What height did she say she dropped it from?

It looks like someone ran it over with a car. Usually, if you drop it, it hits a corner - and it just shatters that particular corner. If it hits face down or back down, it shouldn't shatter like that.

Also the tops and bottoms are missing. Did she drop it off a building?


Also it looks like half the glass is missing from it. ..

Funny, i just helped my boss replace his backplate. (looked nothing like that and he accidently dropped a golf ball on it)
Comment

my friends phone looks like that. pieces are open and all but he drops his phone more times then he can count and finally doesnt care so he drops it whenever now it seems.
definitely not once for hers. more like 10+
Comment
A

She is a bit lacking in information on how it happened, considering she had already done the back a while ago, I think she may be hoping on an insurance claim.
But as only house insurance cover that ain't happing ! 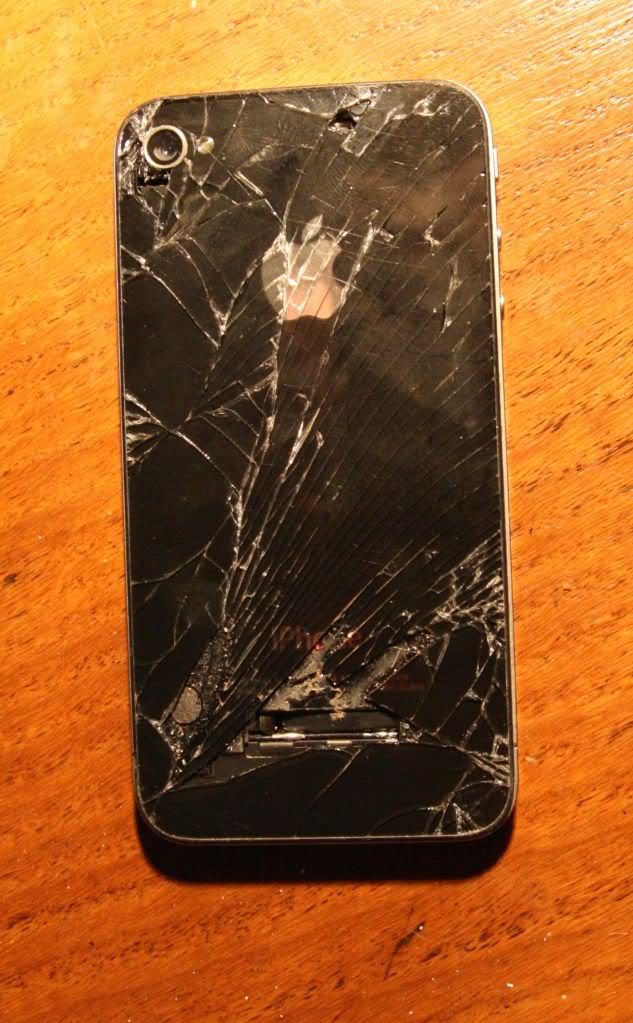 I've dropped my iPhone quite a few times and it held up surprisingly well. It did not break and has no case, sleeve, bumper, cover or anything else. But it wouldn't surprise me - I have read reports of people dropping their iPhone from 4 inches and it shattered into a thousand pieces.
Comment
D

Can we see the corners? Seems like they are untouched, which is unusual for a drop.
Comment
M

Definitely not dropped, unless it was off a sky scraper.
Comment
A

She is def holding out on some information.

Be careful, that broken glass is sharp and tiny pieces can come off of it.

You could try finding replacement parts yourself - not that expensive and pretty easy to do if you follow the instructions.

I once dropped my brand new 3GS (A few years ago) from shorts pocket height. I was putting my phone in my pocket, missed the pocket

Have her buy it herself. You bet she will be a little more careful
Comment

So the back was already damaged from a similar incident??

Something's just not adding up. I've never seen an iPhone look anything like that. I bet it would look better if you drove a car over it.
Comment
T

Without knowing your daughter I recon she either had a temper tantrum or somebody else damaged it and she is covering up. Very little damage to metal and glass is more than just a drop. Somebody has hit it on the back and front. I recon the insurance company would look at that and refuse to pay out.
Comment

Just my opinion of course, but that phone has taken far more abuse than a simple drop
Comment

I agree with the previous post that she should buy the next one herself. Is this the first phone she has owned? It could be that the damage could've come from a drop, but it really looks like she slammed it against a brick wall or ran over it on a concrete driveway.

She should also seriously consider getting an armor plated case for her next iPhone.
Comment

That looks a lot worse than any other iPhone I've seen broken from a single drop. Maybe if she's dropped it a lot of times, or if the drop was from pretty high up. But I agree with the previous poster who suggested making her buy it herself. If she has to buy the replacement especially at full price she'll be a lot more careful with it in the future.
Comment

If you need to stay in contact with her and are unwilling for her to be without a phone, then buy her a basic dumb phone with a pre-pay plan and tell her if she wants something else she can pony up the $$ for it until she can demonstrate responsibility.
Comment
T

It looks like your daughter doesn't take care of things. That phone has been trashed on.
Comment
S

I don't understand. How can someone wreck their property[or their parents if your daughter is still a teen/kid] like that?
Comment

She will not be getting this iphone back when it is repaired, or any decent phone, hopefully as others have said if she buys her own she will look after it, but am not sure if she will.

I feel that she did it on purpose or got someone else to do it in the hopes of getting it done on insurance, and I too believe no insurance company would pay out on it !

Thanks for all your views.


Spectrum Abuser said:
I don't understand. How can someone wreck their property[or their parents if your daughter is still a teen/kid] like that?
Click to expand...

With the damage to both sides of the phone from what I can assess it looks like someone set it on the ground and stomped on it.

you can see the impact points pretty obviously from that. That front and the back would not have shattered from a single drop like that.
Comment

Spectrum Abuser said:
I don't understand. How can someone wreck their property[or their parents if your daughter is still a teen/kid] like that?
Click to expand...

My guess is a small crack in the glass from an accidental drop that she didn't feel was big enough to warrant the replacement she felt she deserved followed by being thrown at the ground a couple times to try to make the damage bad enough that insurance would replace it, but going a bit to far.
Comment
C

Since you said your daughter has already shattered the back, it is most likely she got sick of the shattered glass on the back that she decides that she demand a full new iPhone for herself. She might have faked an accident.
You can't blame kids - its their mentality. This applies to teenagers also well.

I, to be honest, used to do that too. I remember when I was 12, I broke my bicycle and I decided that I'll leave it in the storeroom in a position that it seem to have toppled over. I positioned my broken bicycle in a way such that it seemed that the part has fell off and broke off the bicycle. And much to my surprise, this actually convinced my parents. However, I confessed to this incident like a week ago during a casual conversation with my mother.

When they spoil things, they will try ways to get it repaired or get a new one. Do try to get your daughter not to confess, but to simply speak honestly. To Confess and being honest is two totally different things. Then talk to her nicely.
And that is of course, if you're extremely sure that she's just lying to you to get insurance for her broken iPhone in exchange for a new one.
Comment
You must log in or register to reply here.
Share:
Facebook Twitter Reddit Email Share Link
Register on MacRumors! This sidebar will go away, and you'll see fewer ads.
Sign Up
Top Bottom