Isn't it weird how the iMacs have been kept under wraps as far as leaked information?

You heard about the mini for a while, the retina MacBook Pro as well yet the iMac we haven't heard crap aside from the pic from China. We don't know what's in it or anything.
G

I know ya, it has been very cloaked.

It burns down to two things: consumer interest and accessory makers.

It doesn't take a genius to figure out that desktop users is a dwindling percentage of computer users. Only those who need serious power buy a tower these days. Barring that, a laptop or even iPad is suffice for most people.

On top of that, accessory makers stand to have huge advantage if they know the exterior design in advance so that they can have their products on day 1. So they pay for the workers for leaks. For people who make $15/hr (entry-level Chinese engineers) a few thousand dollars go a long way.

The first explain the leaks in the Retina MBP 13". The second, obviously, is about iPhones, iPads, etc.
T

I think it also comes down to whether the form factor changes or not. If it does (witness the iPhone 5), millions and millions of those have to be manufactured months and months in advance, creating uncounted opportunities for leaks. If the form factor stays the same or relatively the same, there's really nothing to leak.

And if you look at that another way, a lack of leaks argues against a change of form factor for the mini, iMac, and Mac Pro, although it really would not surprise me if Apple MBA-ed the iMac and made it super thin like a Samsung HDTV. That would be pretty cool.
B

I think we have had a decent amount of leaks to be honest. Look at the timeline posted by MacRumors.
And as mentioned before, the world will go crazy for pics of an unreleased iDevice, not so much for a desktop. Not to mention, physical size makes it harder to smuggle a rear shell out of a factory etc.
Maybe we will see something on monday, but at this point, I just want a redesigned 27", and it to be available on Tuesday.
G

iMac isn't that popular. It's just how it is.

If you have the chance to leak the next iPhone or the next iMac which would you do?

I'd love to see more iMac leaked pics which I have a feeling will turn up shortly. It's just getting too close to Tuesday.
E

What are the chances we don't have leaks because the rumors aren't true - we aren't getting a new iMac. Is this a possibility - I hope not.

zoffdino said:
It burns down to two things: consumer interest and accessory makers.

It doesn't take a genius to figure out that desktop users is a dwindling percentage of computer users. Only those who need serious power buy a tower these days. Barring that, a laptop or even iPad is suffice for most people.
Click to expand...

The imac is unusual in that it doesn't offer everything offered by the classic desktop, and it's still not that cheap. Even in terms of ergonomics, I like being able to adjust height. The imac cannot do this out of the box. It requires purchasing an arm, and the one carried by the Apple store is reviewed somewhat poorly on their site.
G

eternalife said:
What are the chances we don't have leaks because the rumors aren't true - we aren't getting a new iMac. Is this a possibility - I hope not.
Click to expand...

We are getting a new iMac. There is little doubt of that regardless of photos.
Y

But probably have been more secretive for the iMac because of the redesign?

I remember on a website a former marketing chief of Apple said they do infact leak information about their products intentionally sometimes, to amplify buzz around the products..
B

eternalife said:
What are the chances we don't have leaks because the rumors aren't true - we aren't getting a new iMac. Is this a possibility - I hope not.
Click to expand...

Fool me once, shame on you. Fool me about once per month, it's got to be an iMac.

i feel like we might be just getting a speed bump instead of the much anticipated "resdesign". Looking at apple's recent track record of their ability to "double down" on security, if there was any resdesign, it should be all over the internet by now.
W

The multitude of leaks on the portable toys are about size and appearance and rarely reveal performance. Their users are all uptight about those nits.

Hence the lack of leaked iMac performance hints other than the single, simple photo of the the several board bits which are interesting but of little import and don't reveal performance.

Thin is probably bad for cooling and ability to access the RAM slots or anything else I and other iMac users might want to replace or upgrade such as the extra RAM I will add for my work unless Apple finally starts installing enough at reasonable cost. Making iMacs thin to get rid of ODDs is silly unless Apple just wants to sell external ODDs.

iPads and laptops have a LONG way to go before they can replace the display and RAM size, power and the built in TBs of iMac HD storage. My son has a laptop and my grandson an iPad. Neither will come close to the maxed out 27" iMac I need and will purchase as soon as available after a couple of weeks for Apple to shake out the initial gremlins.

Desktops have LOTS of users that need a desktop but don't need tower power. That's why Apple is making 2012 iMacs.

The probability of Apple taking this long to just put out a spec bump is very small. I'm hoping for something new.

It would also be a big help if Apple would include a full keyboard instead of the standard little wireless toy. Most desktop users need numbers and functions. Microsoft makes a really nice ergonomic, full sized, comfortable one you can get from Amazon for $50 in case Apple still hasn't got the hundreds of messages on these and other forums. Whoever at Apple has the obsession with "little" needs to be removed from the iMac team.

WilliamDu said:
Whoever at Apple has the obsession with "little" needs to be removed from the iMac team.
Click to expand...

I'm pretty sure that is everyone at Apple.
D

All the evidence says the Imac will come in March and not sooner.
T

david19801 said:
All the evidence says the Imac will come in March and not sooner.
Click to expand...

I hope this is NOT true, if it is OR the new IMac is crippled, I have the parts to build a great PC in the New Egg Basket just waiting to push the button BUT
please Apple do not disappoint, I don't want to go back to the darkside : 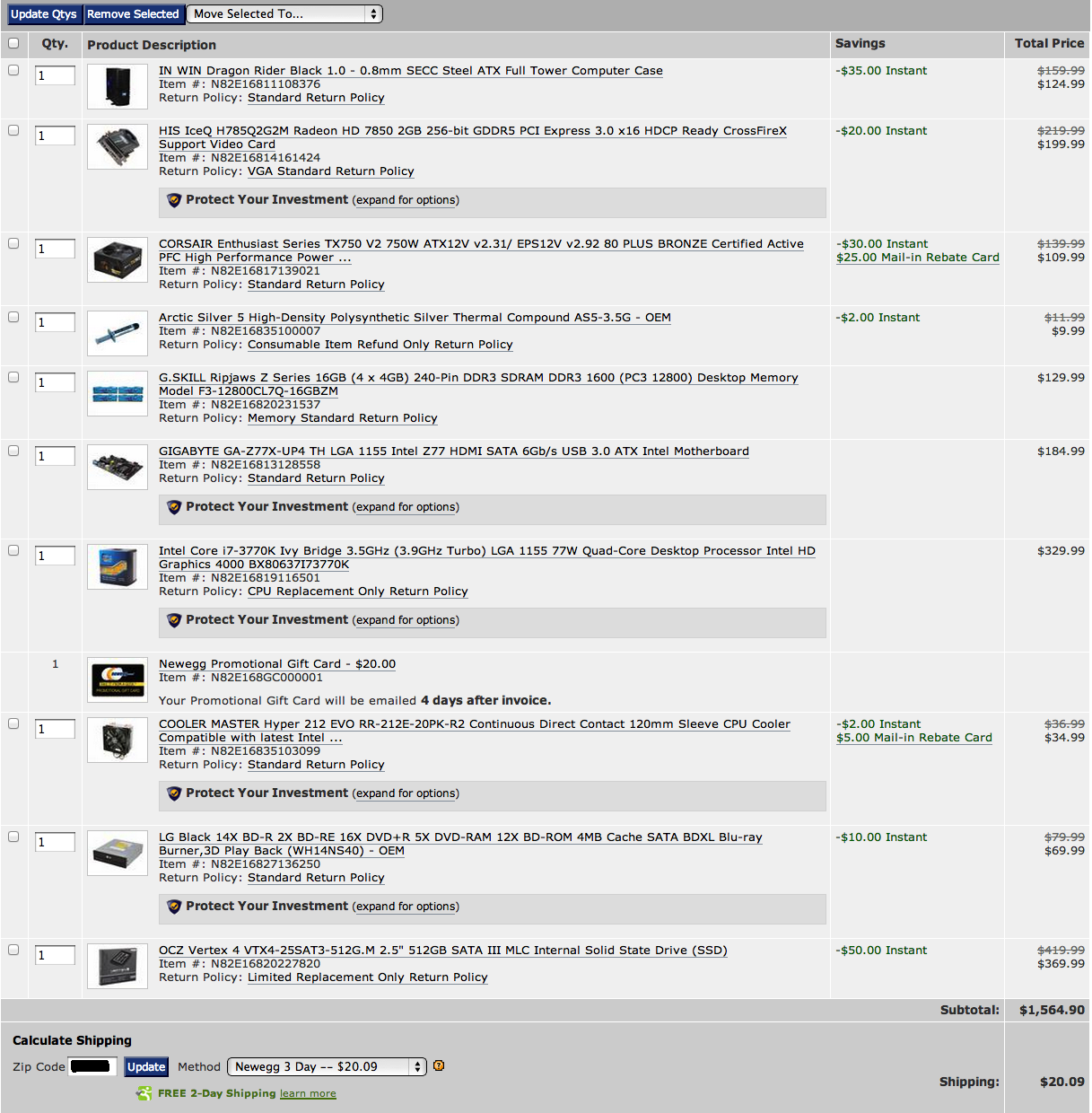 david19801 said:
All the evidence says the Imac will come in March and not sooner.
Click to expand...

Actually, all of the evidence says that the iMac will come on Tuesday, October 23rd. I have no idea where you get March from.

I hope it turns out to be a better upgrade than befell the Mac Pros.

Just a modest upgrade is all we're asking for Apple. Just something!
D

12dylan34 said:
Actually, all of the evidence says that the iMac will come on Tuesday, October 23rd.
Click to expand...

What evidence? A picture of a macbook mini motherboard and what else?
W

There wasn't much of leaks for the MBPr right?

We didn't see any of it until the event.

I think the reason for less leaks can be any of these....

1. An iMac is big. It would be very hard for a factory worker to just take one home and snap photos of it. An iPhone, iPod, even iPad can be taken easier (I'm not saying this is easy, I have heard that there is a lot of security) as opposed to an iMac.

2. Not as many people IN GENERAL care about iMacs, in terms of rumors, speculation, ect. iDevices are much more popular, making iMac leaks less appealing to someone who could potentially leak the information.

3. Apple has something special up its sleeves that it has been trying to hide.

4. There is no new iMac in the works. The final part of the year is for the iPad mini and 13 rMBP only.
1

david19801 said:
What evidence? A picture of a macbook mini motherboard and what else?
Click to expand...

Well that's all of the evidence. I didn't say it was a lot. There's nothing pointing to another time than Tuesday, so that was my point. I'm quite confident Tuesday will be the day.

IMO the fact we have no external pics of the case and just one rumor about a new teardrop design that we might not get any new case this time.

david19801 said:
What evidence? A picture of a macbook mini motherboard and what else?
Click to expand...

L
The color is weird after I inverted the colors and re-inverted them.

Jan 27, 2020
levmc
L
Register on MacRumors! This sidebar will go away, and you'll see fewer ads.
Sign Up
Top Bottom