I had the 24" for about a year and had to sell it because of life situations but I just won a 20" model on eBay for $122, including keyboard and mouse. Looks like stock components as there is just 2GB of RAM and a 250GB HDD. It will probably ship tomorrow but I want to order some upgrades as I don't want to use it as is.

First, I am reading you can only upgrade to 4GB RAM, is this correct? I would love 8GB, I know I had 6GB on my iMac I had previously sold.

Second, I want to put in an SSD to replacing the spinning hard drive. I watched a video and it seems like it is a lot of work to switch it out but I am assuming it is worth it. For those of you that have done it, does the SSD make it fly?
[doublepost=1462663614][/doublepost]Oh and a follow-up question real fast, it says El Capitan works on it, should I do it or make go Yosemite or even Mavericks? Which will run the best on it? I want it to me snappy but don't won't to go any lower than Mavericks though.

IMO, I would wait for the item to arrive before purchasing upgrades just in case there is a mechanical issue that crops up after a while.

Yeah I might wait to test that everything is functioning but I do want to do these two upgrades. Will I be able to do 6GB in this? What are the exact modules I should use (could you link them please?) And I see the Crucial BX100 250GB is just $70, should I get that one?

Typing this from a 2008 iMac 2.4 20-incher. El Capitan works great and I believe 4 GB is the max on ram. That's what we have in this machine. It's been a great computer and certainly has a few more years left for basic computing tasks.

Yes, 6 GB is, in fact, functional on the computer (although not supported officially by Apple). The supported max is 4 GB. The SSD will also work, even though you the speed won't be max because it's 3 Gbps, but it'll still be worth it (should go to around 375 MBps), assuming you get a 3.5" bracket. I suggest you go to El Capitan, it's the latest version and it seems to be one of the most stable according to most people.

garirry, is this what you are talking about? This will fit in the Mac?

GameGuru38 said:
garirry, is this what you are talking about? This will fit in the Mac?

Exactly, but I think there might be something similar but a bit cheaper. This one is four times cheaper, shipping doesn't add up too much. http://www.newegg.ca/Product/Product.aspx?Item=N82E16817994085

Ok this is my Amazon cart for right now, is this everything I will need?

I will be using this iMac for all my online schooling and music, will this make it snappy?

I can't say if it'll be snappy, but it will certainly be better than what it currently has. I think there's nothing missing here, the toolkit seems to include all the necessary tips to open the iMac. Also, don't forget to order TWO of those suction cups, one isn't enough. (I can't check the link because it keeps redirecting me to the Canadian website!) Everything else seems to be compatible.

Good luck! Be warned, disassembling this computer outside of upgrading the RAM is pretty tough, so if you're not confident, don't do it. Otherwise, be sure to check a guide - very important!

Yeah I have watched about 3 videos and plan on watching more. I am sure I can do it, I used to take the original Xbox apart and mod them so I have been through this before to some extent.

Ok I bit and ordered that Amazon cart, dan't wait to get it and upgrade the iMac when it comes in. Should make my experience decent with this Mac.

I have quite a bit of experience with my 24" Early 2008 iMac. Unfortunately its ATI graphics card gave its final cough and died a few months ago. It was a good run -- almost eight years of heavy daily use, and it was still running great with these upgrades (and I am pretty sure you could do the same with the 20"):

Definitely put an SSD where the original HDD is, which is SATA 3 Gbps. I put in a 512 GB Plextor.

Now for the best part (if you can put in both SSD and HDD): a do-it-yourself Fusion drive. Mine was 1.5 TB total, and I loved the performance and convenience.

I was running OS X 10.8.5 (Mountain Lion) and just about to upgrade to El Capitan (but never got to). If I were you I'd just install El Capitan -- I think it will work well.

Mine was the 2.8 GHz Core2Duo. And it really did seem "snappy" to me, for just about everything: email, web, obviously, but it was also good for iPhoto and casualiMovie use. The only things I did that seemed a little slow (but still very usable) were ripping DVDs with Handbrake, transcoding video files, and running Windows XP and OS X virtual machines with Virtualbox!

Oh, another tip: you don't need massive suction cups, although you do need two. I used one that is 1.5" and the other is less than 1". I think I took from a shower-wall-basket kind of thing! I used an ifixit guide and it was great.

I wound up upgrading the RAM to just 4GB (might try the 6GB in the future but not sure how much more performance I would net though), installed the Sandisk 240GB SSD Plus and originally had Lion on it but yesterday did upgrade it to El Capitan. Although it is running ok it isn't as snappy as it was with Lion. Since I don't have Mavericks associated with my Apple ID (only Lion, Yosemite and El Capitan) I did order a USB thumb drive from Amazon with Mavericks on it and think that is the OS I will go with.

I don't think I will do any more to this because I think I am going to pass this on to my daughter and go with a 2010 iMac or another recommendation from any of you that won't break the bank.

GameGuru38 said:
(might try the 6GB in the future but not sure how much more performance I would net though)
Click to expand...

A lot. Contrary to what you will read online there is a massive difference simply between 4 and 6.
Of course you want 8 and up in today's day and age but I imagine 6 would be passable for most uses...

I think you're also better off going with the older OS. The older Macs have trouble handling the newer OS's (a lot of the time), Apple's way of getting you to buy a new computer.

Yeah I am definitely putting Mavericks on it, it is still being supported and I can still get modern browsers on it.
B

GameGuru38 said:
... did upgrade it to El Capitan. Although it is running ok it isn't as snappy as it was with Lion. Since I don't have Mavericks associated with my Apple ID (only Lion, Yosemite and El Capitan) I did order a USB thumb drive from Amazon with Mavericks on it and think that is the OS I will go with...
Click to expand...

A shame it didn't peform that well with El Capitan. I'm a little surprised because my impression was that El Capitan didn't really use any more resources than Mavericks or even Mt. Lion. But that's just a vague impression formed by reading a few random postings, plus the fact that Apple still claims only 4 GB RAM is needed for El Capitan (right?).

Hope it works for you.

El Capitan runs pretty well on my 2007 20" base model (with 4GB RAM and SSD), but I did have to turn on reduce transparency to keep the frame-rate up when moving windows around and such. Not an issue with Mavericks since it's still the older UI, but it helps a lot on El Cap. Snow Leopard + SSD is probably the best example of how quick this iMac can be, but it's just so old it isn't really worth it now. Mavericks has some time left in it but it'll eventually move on like the rest where El Cap will still have some browser support and support for newer software like Office 2016 and the like.

I mostly run the Adobe Creative Suite (PS, AI, ID), Logic Pro X, Serato DJ, iTunes, Safari, MainStage, Office 2016, and a little FCP. Everything runs pretty well minus anything GPU intensive or large LCP/FCP projects due to the 128 MB video card. It still surprises me though since the thing is nearly 9 years old at this point and can still be very useful.

On a side note, it also runs Windows 10 very well, and at a surprisingly high frame-rate. You just have to hunt down the drivers yourself and force it to install Boot Camp X64. Good project for older unsupported Intel Macs that got the boot with ML or Lion. 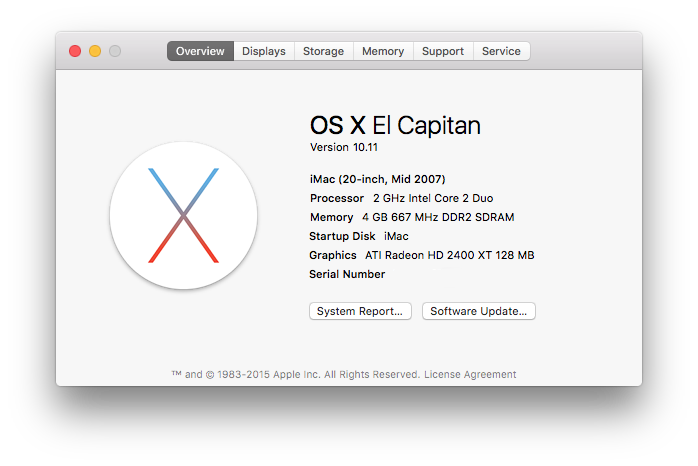 the Adaptadrive is worth it IMO. I just did this upgrade myself on an office mac, and bought some $4 adaptor plate that was useless. I just ended up taping in the SSD!