Launch Center Pro, an app that offers quick access shortcuts for everyday tasks, today released a major update that adds quite a bit of new functionality. 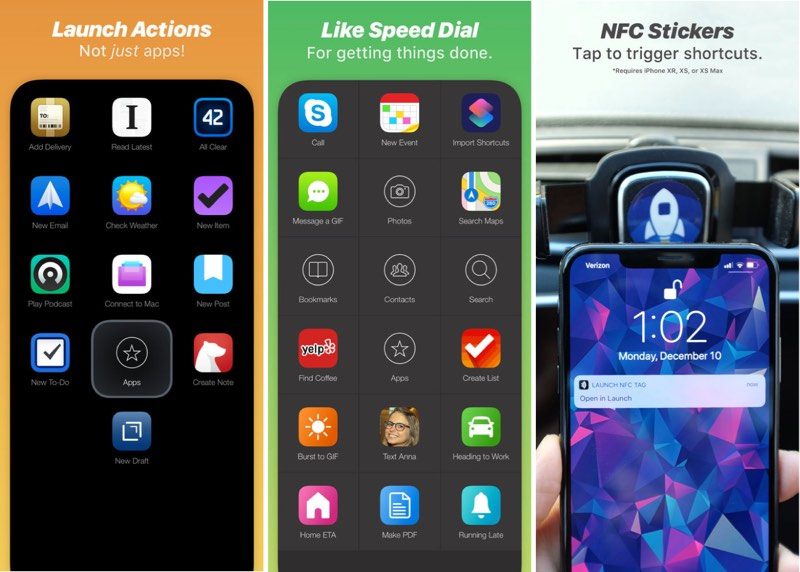 There are endless options for these NFC stickers for tasks like triggering HomeKit scenes, getting directions to a specific place, starting music or podcasts, and more.

A new advanced scheduling feature in Launch Center Pro 3.0 is designed to let you assign more than one schedule to a single action, and Launch Center Pro actions can now be turned into Siri Shortcuts with Siri support.

New themes have been added to the app, including a "True Black" theme designed for Apple's OLED devices. Alternate app icons have been added so you can choose from various color variations and all past Launch Center Pro icons, and there's an option to import icons from the Shortcuts app.

Also new is support for the iPhone XR, XS, and XS Max, and this version of the app is also universal, which means the dedicated Launch Center Pro for iPad app has been retired.

With the update, Launch Center Pro is free to download, with an in-app subscription and in-app purchases available to unlock full functionality.

Anyone who has paid for Launch Center Pro in the past will be able to continue using the existing paid features sans subscription, but access to the new features in the 3.0 version will require a subscription purchase or one of several other payment options. Launch Center Pro also offers a one-time payment of $29.99 to unlock the 3.0 content ($24.99 for existing users) and individual 3.0 update features can be unlocked for one-time purchase prices starting at $1.99.

Launch Center Pro can be downloaded from the App Store for free. [Direct Link]

This app is much more difficult to use than Shortcuts. Surprised they didn’t try to make Actions easier to build. I don’t see this new subscription model being very popular. Plus they let version 2 wither on the vine for quite some time.

$5 for a pack of 5 NFC stickers (plus tax but free shipping in US) seems pretty fair, allowing me to put stickers around the house, car, or office to trigger action. For instance, tapping my phone against an NFC sticker on my car can send a text to my spouse with estimated arrival time.

Scheduled actions is pretty intriguing. I am not sure what I would need to schedule though.

Having said that, I am not sure these improvements are worth $25 one time upgrade fee.

I was hoping for more dramatically overhauled launch screen, but it's largely unchanged. As much as I prefer Shortcuts app overall, it's terrible at organization. Launch Center Pro is better in this regard, but not enough. I would've loved to see multiple styles, such as CarPlay-like minimal layout and multiple layouts depending on the location or other factors (similar to Launcher app).

DaveTheRave said:
This app is much more difficult to use than Shortcuts. Surprised they didn’t try to make Actions easier to build. I don’t see this new subscription model being very popular. Plus they let version 2 wither on the vine for quite some time.
Click to expand...

On-boarding process has been Launch Center Pro's weakness. It's tedious to learn and setup LCP to a point where you can start appreciating its power. To large degree, the same can be said for Shortcuts, which is probably why iOS 12 evolved Workflows into Shortcuts app and more user accessible Siri Shortcuts.
Last edited: Dec 18, 2018

I appreciate the discount for having purchased the previous version. I went ahead and made the one-time purchase. I like the app and have no problem supporting developers who are doing good work and communicating with customers.
Reactions: CanadianGuy and ignatius345
R

Anyone have a link to that wallpaper being shown? Thanks

I thought developers couldn’t use the NFC capability in the iPhone? Wasn’t that why the Australian Banks were complaining about being unable to create their own digital wallets?
S

Read the description too fast and expected a complaint thread about the 29.99 subscription...

danmart said:
I thought developers couldn’t use the NFC capability in the iPhone? Wasn’t that why the Australian Banks were complaining about being unable to create their own digital wallets?
Click to expand...

They can read tags now, but can't send custom data, which would be needed.
Reactions: danmart

This app is interesting. I've wanted to add a backup camera to a vehicle without running wires and/or adding a screen on the dash. iOS versions exist but if I have to start the app each time I doubt it will get used; if this can automatically open it when I set my phone on the mount it would be nice.

Why can my iphone 6 use apple pay (NFC), but not use nfc tags?
P

Is there a way to do nfc triggers without this app?
Reactions: ignatius345

Scooz said:
Read the description too fast and expected a complaint thread about the 29.99 subscription...
Click to expand...

Looks like they're one-time purchases instead of recurring software rental charges. If I wanted this functionality, I'd pay, no problem.
S

Scooz said:
Read the description too fast and expected a complaint thread about the 29.99 subscription...
Click to expand...

ignatius345 said:
Looks like they're one-time purchases instead of recurring software rental charges. If I wanted this functionality, I'd pay, no problem.
Click to expand...

Hm, now YOU read MY description too fast
Reactions: ignatius345

I've been using this app for a couple days, and so far like it a lot. I have paid to enable more actions, and custom icon. May do more shortly. Here are my thoughts on it so far:

1) The learning curve has not been too bad. I've already set it up fairly well. That said, I wish there was a place to go for common url formulas. For example, I copy/paste from one of the contact examples... where if you click on it it gives you a menu with several choices (text, call, facetime, email). I've figured out how to modify that by removing some choices for people I don't need those choices, and changing Facetime to Facetime Audio for some people. But I would have never figured out all that on my own. More example templates in there might be useful.

2) The Action Composer has selections for Featured, System, Apps with Actions, All Supported Apps, Featured Apps. I often have to go to the All Supported Apps.... which has an extremely huge list of apps, many of which aren't even available on App Store any more. I wish they would add another menu option that ive seen on other apps before: Installed Apps. This would help, because even searching for something within All Supported Apps often still returns 20-50 apps.

3) Some apps I can't locate. I am aware that Apple removed a lot of the Settings actions... so i'm not expecting those. But I have had trouble with finding Calculator (the stock one), and Messages (to just open the app), and App Store (to just open the App).

4) I seriously wish Apple would make iOS function more like this app. Im tired of their icons, with their non-adjustable nature. And I don't like the way folders function (for example, once you launch an app within a folder, the folder is still open after you leave the app). This setup is way cooler.

5) I too think the pricing is very reasonable. Have had no problem with the in-app purchases I've made so far, and expect to do a couple more of the options shortly.