Looking to get the next iPhone? Don't expect an A5X.

Chipworks, a similar tear down company (that also does die x-rays, hopefully forthcoming for the A5X), also took a look at the guts here: 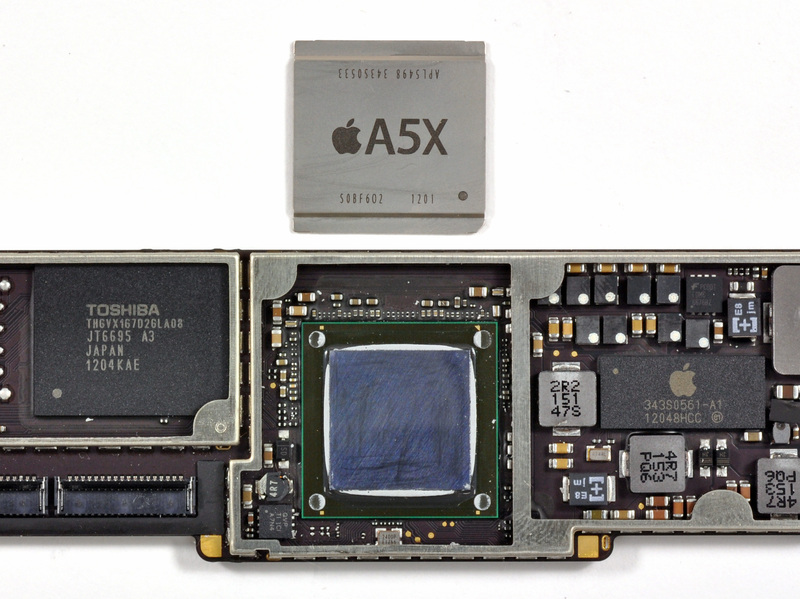 A look at the A5X with the heat spreader off 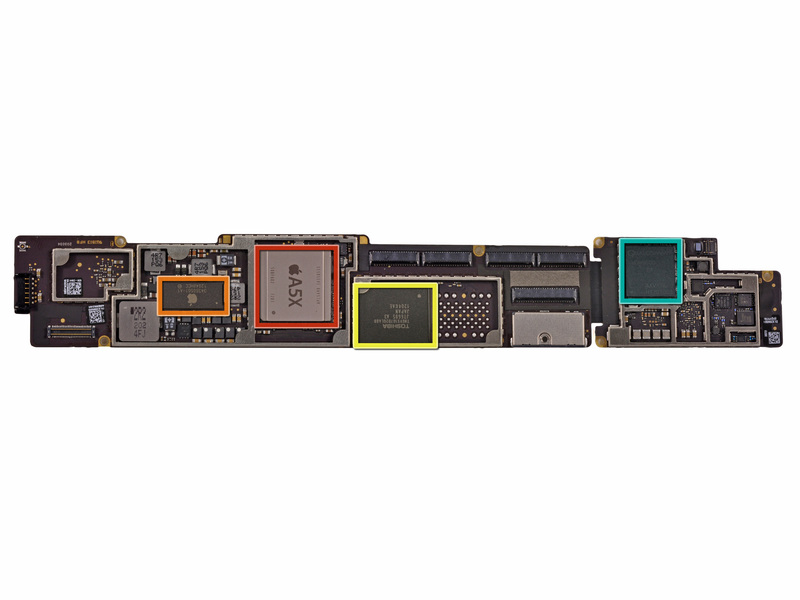 Top view of iPad logic board 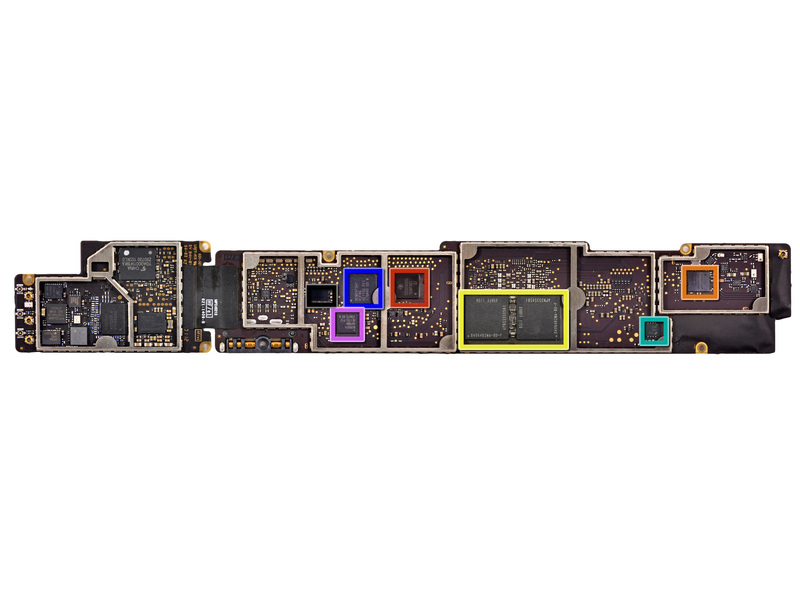 1GB DRAM, 2 packages, not on CPU package (bordered in yellow)

The biggest shift that can be seen here is that the DRAM is no longer located on the same package as the CPU die. This is normally done to save space in a mobile device and is referred to as PoP (package on package). It is beneficial in that it saves space and it saves routing relatively high speed data lines on your logic board. The main disadvantage is reduced ability to conduct heat away from the CPU. However, this normally isn't a problem for low power CPUs. So, given these advantages, it seems likely that Apple moved the DRAM dies away from the CPU to allow heat to be conducted away from the CPU better. I asked Anand Shimpi from the respected anandtech if he agreed with that assessment, and he did. (https://twitter.com/#!/anandshimpi/status/180632702750429187)

So, why does this spell trouble for the next iphone? Well, the iphone has a lot smaller space and tighter thermal constraints. Apple has downclocked the A4 and A5 CPUs about 20% from their respective iPad clocks for battery life as well as thermal concerns. If they are forced to move the DRAM off package for the A5X, it simply won't fit in the next iPhone, which doesn't have space for extra DRAM packages on the logic board. If they put the DRAM on the package, they would likely have to severely underclock it to meet power and thermal constraints (remember, the iPad 3 battery is 70% bigger. The A5X, LTE and new retina screen really use power!). At some point, underclocking no longer becomes efficient for processors. It's simply too much logic clocked low. Imagine having a V12 engine you could only run at 2000 RPM. It's much better to have a V6 you can run at 8000 RPM as it is better able to adjust to dynamic power demands.

So, what will the next iPhone have? Well, if the A6 rumors are true and it has a quad core CPU, it seems likely it will have a Tegra 3-like configuration with 4 A9 CPU cores and some more modest GPU configuration, perhaps a repeat of the 543MP2. It's important to note that Apple could take an aggressive route and A6 could feature a next generation CPU core (Cortex A15, both Samsung and Nvidia will launch an A15 core this year) or GPU core (ImgTec 600 series, or "Rogue"). Both of these would represent a significant boost in computing power, clock for clock and would be the most efficient way to improve performance in the same die size and power budget. Traditionally, Apple has been rather aggressive in their CPU roadmap (the A5X is the undisputed GPU powerhouse aside from the Vita), so it seems anything is possible.

edit: Now that chipworks has seemingly confirmed they are still using the samsung 45nm process, that opens apple's options up a bit. A 32nm or 28nm shrink of the A5X may be able to work. The other options above still hold true as well. It seems very unlikely that Apple will stick with a 45nm process if the next iphone features anything other than the A5 of the iPhone 4S.

Further reading: (A5X likely built on 32nm samsung process) http://www.anandtech.com/show/5681/apples-a5x-die-and-size-revealed
edit: Chipworks now disagrees with this and says it looks like the 45nm process is still in use. See second chipworks link above.

Using the Toshiba eMMC NAND that resides next to the A5X as a reference, we can come up with a rough idea of die size. Based on Toshiba's public documentation, 24nm eMMC 16GB parts measure 12mm x 16mm. Using photoshop and the mystical power of ratios we come up with a rough estimate of 10.8mm x 10.8mm for the A5X die, or 117.5mm^2. If you remember back to our iPad analysis article, we guessed that conservative scaling on a 32nm process would give Apple a ~125mm^2 die for the A5X. While there's a lot of estimation in our methodology, it appears likely that the A5X's die is built on a 28/32nm process - or at least not a 45nm process. Note that this value is entirely dependent on the dimensions of Toshiba's NAND being accurate as well as the photo being as level and distortion-free as possible.
Click to expand...

Disclaimer: The Playstation Vita has a quad core CPU and GPU, and is very similar to the A5X. They essentially have the same GPU, but the Vita has a 543MP4+, the + indicating some undisclosed logic. The quad core CPU is likely different in its implementation of core logic as the A5 is apple customized and much larger than the vanilla A9 core. The Playstation Vita has all 512MB + 128MB of its RAM directly on the package, suggesting it can be cooled sufficiently in that configuration. This could possibly mean that the A5X had its RAM moved off chip for other reasons, but you have to keep in mind that the iPad and Vita likely deal with heat differently as their logic board shapes differ in addition to be very different devices.

Seeing as how the whole point of the A5X was to drive all those extra pixels (which the iPhone doesn't have) I was never convinced that the iPhone needed it.

But thanks for doing some detailed analysis to poke even more holes in the 'A5X on iPhone' theory. Fascinating stuff.
Comment

Absolutely interesting. I agree with Small White Car that the next iPhone, whatever it may be called, will never need a quad core GPU. I can see Apple adding more RAM, possibly.
Comment

A5X quad-core GPU is utterly and completely pointless and wasted on a display like the iPhone that has a fraction of the pixels of the 3rd iPad.

People should be hoping for power sipping powerful dual-core CortexA15 based A6 with another dual-core GPU for the 6th iPhone.
Comment

I'm an EE by trade, so I have to pretend I know what I'm talking about occasionally.


Menel said:
A5X quad-core GPU is utterly and completely pointless and wasted on a display like the iPhone that has a fraction of the pixels of the 3rd iPad.

People should be hoping for power sipping powerful dual-core CortexA15 based A6 with another dual-core GPU for the 6th iPhone.
Click to expand...

It's all a matter of what develops want to do on the platform. You could absolutely write a game to abuse the 543MP4 on an iphone's resolution (they are doing that right now on the Vita). You can also code to utilize quad core processors, especially when you're writing the core OS and most developers are implementing the APIs you wrote to interface with the system.

However, I agree with you and I think the best mix of die size, power and usage scenarios makes you end up with a dual core A15 and dual core Rogue GPU. Apple's choice for the A6 (if it is indeed in the next iphone) will show what they deem to be the metric of most interest.


Also, as an aside, Anandtech came up with a new article comparing die sizes. http://www.anandtech.com/show/5685/apple-a5x-die-size-measured-16294mm2-likely-still-45nm The A5X is twice as big as Tegra 3 and bigger than some Sandy Bridge chips!
Comment

Here's a look at the 4S logic board: 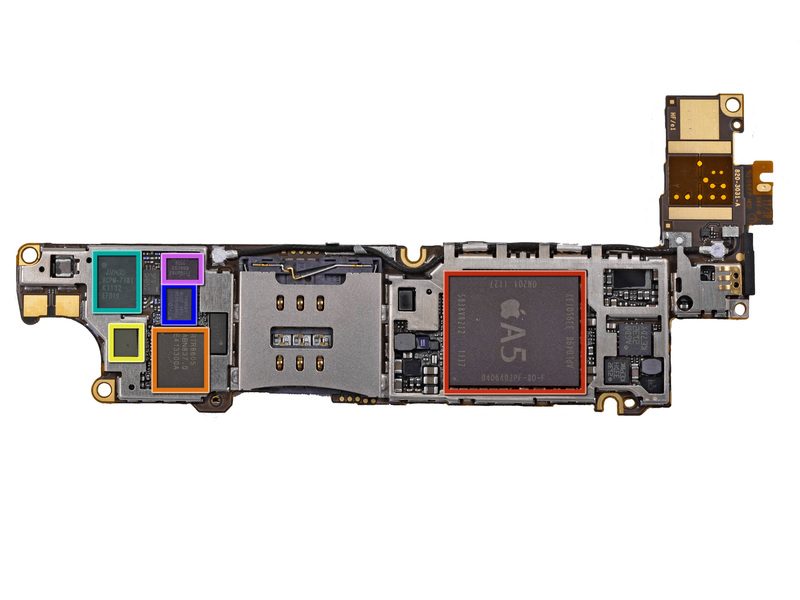 The A5X is 33% bigger than the A5 you see there. Now imagine trying to fit those two packages bordered in yellow (picture in OP) too! Isn't happening.
Comment
M

chrmjenkins said:
Here's a look at the 4S logic board:

The A5X is 33% bigger than the A5 you see there. Now imagine trying to fit those two packages bordered in yellow (picture in OP) too! Isn't happening.
Click to expand...

Don't Worry guys! Apple is Magical, they'll pull off something amazing and then get an A5X on and then I will laugh at all of you thinking Apple can't put the A5X on an iPhone, besides I think one of those RAM chips is the Flash (correct me if I am wrong)
Comment

mac26 said:
Don't Worry guys! Apple is Magical, they'll pull off something amazing and then get an A5X on and then I will laugh at all of you thinking Apple can't put the A5X on an iPhone, besides I think one of those RAM chips is the Flash (correct me if I am wrong)
Click to expand...

If you look at the board layout, you can see they're actually directly below the A5X, which makes sense because you don't want data and address lines wandering all around the board if you can help it.
Comment
M

IGNORE my last post, I re-read everything, thought about it a bit more saw the thing on the front page and I think the next iPhone will just be a re-design of the 4S (with A5 chip) and possibly 1GB RAM, kinda of like the iPhone 3GS -> 4 and iPhone (1st gen.) -> 3G
Comment
T

There will also be new 4G LTE chips that use less power....
Comment

The new iPhone (see what I did there lol) will be the same design that was leaked last year. iPod touch design with larger screen. Lte etc etc
Comment
M

There will also be new 4G LTE chips that use less power....
Click to expand...

And the Leaf's will win the Stanley Cup, sorry bud neither of these are happening even though I want both to happen
Comment

I agree with the sentiment that the next iPhone will not have a quad-core GPU, but I wouldn't say the iPhone will never have one.

If Apple has taught me anything, it's never to deal in absolutes. /irony
Comment

There will also be new 4G LTE chips that use less power....
Click to expand...

No offense here but, are you drunk?
Comment
S

To people who say quad core GPU is useless in an iPhone, how are we going to play infinity blade dungeons or its later editions on the iPhone without a more powerful GPU?
Comment

sentinelsx said:
To people who say quad core GPU is useless in an iPhone, how are we going to play infinity blade dungeons or its later editions on the iPhone without a more powerful GPU?
Click to expand...

It's not as fluid as on the 4/4S though as i tested on a 3GS. Also playing MC3 even on a 4 is sometimes laggy at times. Plus in the future we will be getting better graphics as a result of these improvements.
Comment
B

sentinelsx said:
To people who say quad core GPU is useless in an iPhone, how are we going to play infinity blade dungeons or its later editions on the iPhone without a more powerful GPU?
Click to expand...

Here it is in all its glory