Most of the folders are missing in Finder?

My mom got a big new Mac desktop recently, and my most recent exposures to Mac OS are on my old 2011 MacBook Pro running an older OS for some older software I still want to use. So I'm having trouble navigating this 10.15.2 she's running. She has gotten it set up so her iPad and iPhone are syncing to her computer - we can see the photos showing up. I want to copy the Photos library to the external hard drive I got her (and ideally set it up so photos are backing up routinely in the background or it won't get done on a regular basis). The problem is that all the search results I'm finding online say to just drag the Photos library from the Pictures folder and easy peasy. Except... when I go to her Finder, there is almost nothing listed. She's got iCloud, with basically nothing in it, and on the desktop she's got a shortcut to a relocated items folder. I looked where it directed me, and found a Photos Library, but it wouldn't let me copy it to the EHD. I don't know where else to look for where the Photos Library is - is everything supposed to be gone now from the Finder sidebar, or did they maybe not install something correctly when they set it up? (I think they've had it about for maybe a month now.) I am not familiar enough with this to muck about a bunch, and maybe this is just the way this new OS is organized, but if you have any advice for me I'd appreciate it. I'm attaching a screenshot so you can see how little there is in the finder to look through. You can see she hooked the EHD's I've gotten her back in, but she doesn't have anything being written to them automatically anymore. And the only thing on the desktop is the shortcut to the relocated items, which they are apparently using to get to anything they need. I don't think they questioned why they are having to go through that shortcut now. 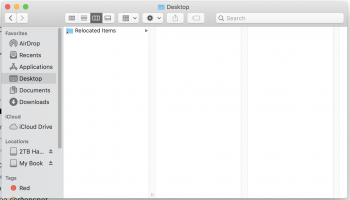 In Finder's menu bar choose Go -> Home. That should show everything in her 'home' folder. You can get it permanently in the sidebar by doing (in Finder's menu) Finder -> Preferences, choose the Sidebar tab and tick the box next to the little house with her username. You can tick other things if you want, but that is the key one. Apple likes to hide important concepts (like home folder or even disk) from the end user.
You must log in or register to reply here.
Share:
Facebook Twitter Reddit Email Link
Register on MacRumors! This sidebar will go away, and you'll see fewer ads.
Sign Up
Top Bottom