Mozilla slowing down after use

Not exactly a Mac problem but I'll give it a shot anywayz.......

Mozilla 1.1 has been slowing down for me after about 30min to an hour of use and I don't mean browsing speed.
When I open a new tab, it has a bit if a delay which wasn't there before, the same thing happens when I try to switch tabs or scroll up down the page.
It's never did this before, and when I close it down and restart it, it's fine, but about an hour later, it slows down again.
I haven't done anything to my PC recently, except install a few unrelated graphics software so I really can't think of what it could be.

Anybody got any thoughts?

Re: Mozilla slowing down after use

Originally posted by edvniow
Not exactly a Mac problem but I'll give it a shot anywayz.......

Mozilla 1.1 has been slowing down for me after about 30min to an hour of use and I don't mean browsing speed.

what you described sounds like a memory leak, which would be in the mozilla s/w.

do this: open up process viewer (apps/utilities) and track how much memory the app is using.

as you add windows, the memory usage should grow. now take those windows away -- the usage should shrink (ideally to where it was).

if it doesn't, it's likely a memory leak. the workaround is to quit the app and restart.

what version of mozilla are you using? perhaps it's a known issue. check the mozilla bug site.
Comment

mozilla having memory leaks out the wazoo is a very known problem. unfortunately its just the nature of the beast. try a cut down browser such as Pheonix.


what you described sounds like a memory leak, which would be in the mozilla s/w.

do this: open up process viewer (apps/utilities) and track how much memory the app is using.

I'm using v1.1.
Haven't tried any of the nightly builds cuz I'm on dialup and I don't like to waste my precious bandwith downloading stuff which I might not need.
I'll check it out though.


I have tried out Phoenix, and I liked it, but it's still too buggy for me, even in v0.3.
Thanx anywayz.
Comment

Originally posted by sparkleytone
mozilla having memory leaks out the wazoo is a very known problem.
Click to expand...

there ya go. mystery solved.

the thing that fixed bugs for me on phoenix was:
1) drag the "phoenix" folder to the recycle bin and empty er, and install a nightly build of phoenix (lol theyre just as good )
2) go into c:/documents and settings/your name/ and some other stuff *im on a mac right now so i dont remember) and back up your bookmarks into a diff folder, and delete the phoenix profile (including the 2 files before the profile directory that includes a file named registry or something along those words) and then double click on phoenix, after u trashed the files, and it will create a new profile, and hten u can paste your old prefs into the new profile...hopefully works lol.
phoenix is an awesome browser in my opinion, in the 1 month ive been using it on hexpee, its crashed alot less than mozilla did in 3-4 months... (had lots of problems with upgrading mozilla and profile errors)
but david hyatt (chimera creator) is one of the head developers for phoenix and he made it one of the smallest and fastest browsers around

theres now themes available for phoenix internet browser , http://themes.mozdev.org/phoenix right now theres only orbit and pinball available, and a new theme that ive never seen b4 but there'll probably be more themes soon...
today there was a theme called blue streak (see screenie below) and arvid's que...some of the themes look promising 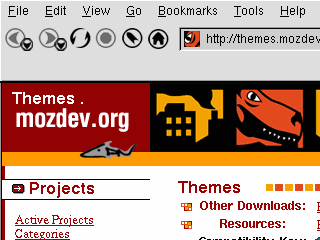 I'll give a nightly biuld a try.

Gimme about an hour to download it.
Dialup is hell on earth.

lol 28.8 is like playing a high graphics game at 1 fps 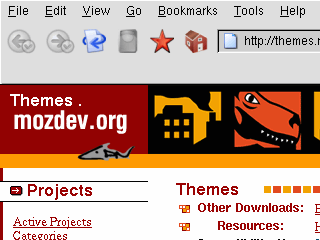