Hi All:
In January 2016, I bought a 27” iMac with a 3TB Hard Drive & 16GB of RAM. Two weeks ago tomorrow, the Hard Drive crapped out. I spent over an hour on the phone with an Apple Support Tech, with no result. I took the computer to an Apple Store where they decided I needed to reinstall the OS. I got the machine back 2 days later and the problem persisted. As I tried to restore from. My Time Machine Backup via the Migration Manager, the computer would restart. I tried restore using OS Utilities. The same problem occurred. I got as far as restoring 5GB from Time Machine, before the computer restarted again.
I only learned during all of this that the Hard Drive was a Fusion Drive. The Fusion Drive consists of a 128GB SSD & a 3TB HDD. The problem appears to be with the SSD. My question is, Can the 3TB HDD be separated from the SSD and have the OS, my Apps & Files restored from my Time Machine onto the HDD? Please let me know.
Thanks.

Instructions for spitting the fusion drive. What makes you think the SSD is the problem? It’s usually the hard drive.
Comment
G

glenthompson said:
Instructions for spitting the fusion drive. What makes you think the SSD is the problem? It’s usually the hard drive.
Click to expand...

During one of my many discussions with Apple Support, we attempted to run First Aid on both the HDD & SSD. The HDD passed, while the SSD reported an error.
Comment

Agree with suggestion it usually is the platter drive that has problems. Be aware there are different procedures to split the fusion depending on operating system and which format, HFS or APFS. Make sure you have a current backup as splitting the fusion drive will erase everything.
Comment

glenthompson said:
What makes you think the SSD is the problem? It’s usually the hard drive.
Click to expand...

nambuccaheadsau said:
Agree with suggestion it usually is the platter drive that has problems.
Click to expand...

My FD was on the verge of dying earlier this year -- specifically the SSD portion which was seeing massive, massive amounts of wear. Turns out the way a Fusion Drive works just hammers the SSD with reads and writes. When you think about it, this makes sense: the OS is continually migrating whatever files are seeing more or less use back and forth between the SSD and the HDD. And the SSDs in Fusion Drives are typically quite small, which makes them much more susceptible to wear, there being way fewer memory cells to do all the lifting. It's a shame, because theoretically the Fusion Drive buys you the cheap capacity of an HDD and much of the speed of an SSD -- but in practice longevity seems to be the price you pay.

Here's what mine looked like when I decomissioned it: 10% lifetime left according to DriveDx. Another utility I tried showed similar results. I didn't wait for it to finish dying.

I opened the machine up, pulled out the SATA HDD -- which was still going strong -- and replaced it with a SATA SSD. It's possible to replace the blade SSD, but it's much more involved (there's a great thread here on these forums all about it) and frankly SATA was fast enough for me.

Opening up the iMac 5K is no joke, but the kit and documentation from iFixit helped a ton. I pulled it off in maybe 2 hours, going really slowly and carefully. Total cost was maybe $250 including the SSD and the repair kit.
Last edited: Oct 4, 2020
Comment

I think your first order of business is to get the iMac "bootable to the finder" again.

You're NOT going to be able to use either of the internal drives for this. At least not yet.

I suggest you put together an EXTERNAL USB3 boot SSD.
You can use this to get the iMac booted/running again.
Then... you can address the problem with the defective internal drive (either SSD or HDD).

For an external SSD, I can make two suggestions:
FIRST SUGGESTION: (this will give you read speeds of 420MBps)
Get a 2.5" SATA SSD, either 500gb or 1tb.
Get an enclosure like this: 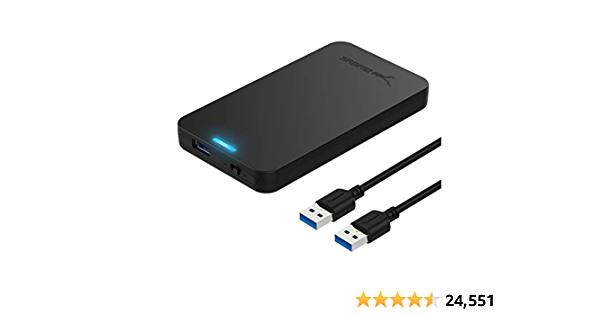 Then, quit disk utility, open the OS installer, and install a copy of whatever OS you can onto the external SSD.
When done, you should be booted from the SSD, so use setup assistant to create a basic account so you can log in and GET TO THE FINDER.

SECOND SUGGESTION: (this will give you read speeds of 965MBps)
Get an "nvme blade SSD", again either 500gb or 1tb
Get a USB3.1 gen2 enclosure for the blade (numerous ones out there).
Put it together and use the same instructions as above to create your boot drive.

Now, you can boot and run the iMac INDEPENDENTLY of the "drives inside".

At this point, my advice is:
Use the terminal to "split" the fusion drive, if that hasn't been done already.
(someone above "pointed the way" on that).
Then, I suggest you use disk utility to erase and test each drive INDIVIDUALLY.
This will reveal for certain which one is the problem.
(Note: in 2013/some2014 iMacs, there was a problem with the Seagate 3tb HDDs, which had an unusually high rate of failure. I realize this may not apply to you.)

IF you are able to determine that the SSD portion of the fusion drive has in fact failed, my advice would be to leave it "dead, but in place".
Then, let the "good" 3tb HDD become a "standalone" drive inside.
You can restore your tm backup (or at least some of it) to the HDD.
But, instead of being the boot drive (it will be too slow), it will become your "main data repository" on which you keep your large libraries of movies, music, pictures, etc.

But the new USB3 SSD will become your FAST boot drive.
It may not be large enough to hold everything.
So, the main things to keep on it will be:
- The OS (of course)
- Applications
- BASIC accounts (you may not be able to keep your large libraries on it, but the 3tb internal HDD will handle these just fine).

You will now have TWO drive icons on the desktop at all times, but this really isn't a problem.
You'll still remember "where things are".
(I've been working with numerous drive icons on my desktops since the late 1980's. I wouldn't have it any other way.)

Again -- the main thing right now is to get the iMac BOOTABLE again, and you can proceed from that point.

The alternative (I won't recommend this, but you COULD do it):
Use disk utility to split apart the fusion drive.
Use disk utility to erase the internal HDD
Use TM to restore to the HDD
but...
Leave the SSD portion of the fusion drive "dead, but in place".
Why I don't recommend this:
I don't think you'll be pleased with the speed of the OS running from the internal HDD...
Comment
You must log in or register to reply here.
Share:
Facebook Twitter Reddit Email Share Link
Register on MacRumors! This sidebar will go away, and you'll see fewer ads.
Sign Up
Top Bottom