Following the launch of the ultra powerful iPad Pro, Algoriddim, the developers behind the popular line of djay apps for Mac and iOS devices, set out to build a professional quality djaying app designed with the new tablet in mind.

The result of that effort is djay Pro, which is available today for both the iPad Pro and older iPads. djay Pro takes some of the best parts from the djay Pro app for Mac and refines and improves them for use on a touch screen. Algoriddim tells MacRumors that the screen size and the power of the iPad Pro allowed the app to come together amazingly fast because they were so excited by what's possible with Apple's latest tablet. 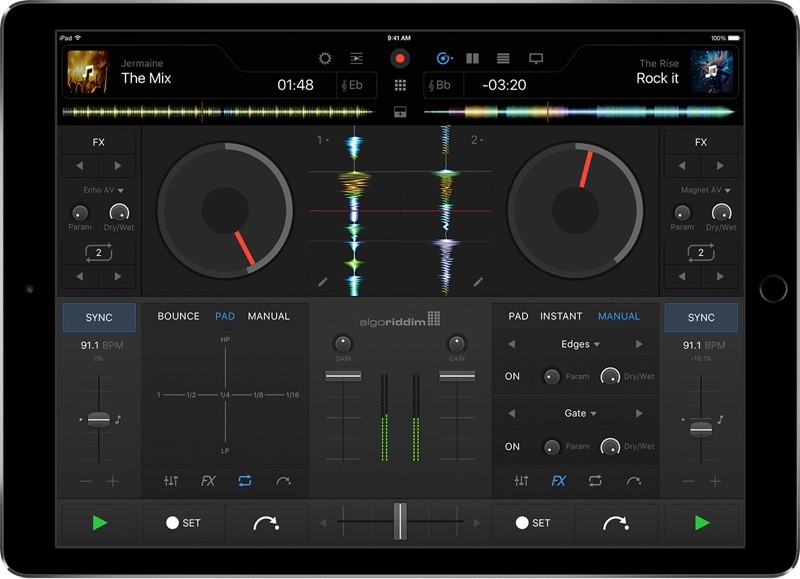 djay Pro is designed for professional users, but it also has a clever interface that's able to shift and grow with skill level. Algoriddim's Michael Simmons likened it to the layers of an onion, with users able to add or subtract layers of tools for as much simplicity or power as they desire.

At its core, djay Pro has a fresh design that's modern and less distracting while still incorporating all of the tools a professional needs. The default app interface includes two decks along with a range of different mixing tools, but it is able to incorporate up to four decks, displayed vertically or horizontally for mixing up to four audio tracks together. Advanced performance modes offer access to horizontal and vertical colored wave forms, live sampler and drum pads, and FX racks. 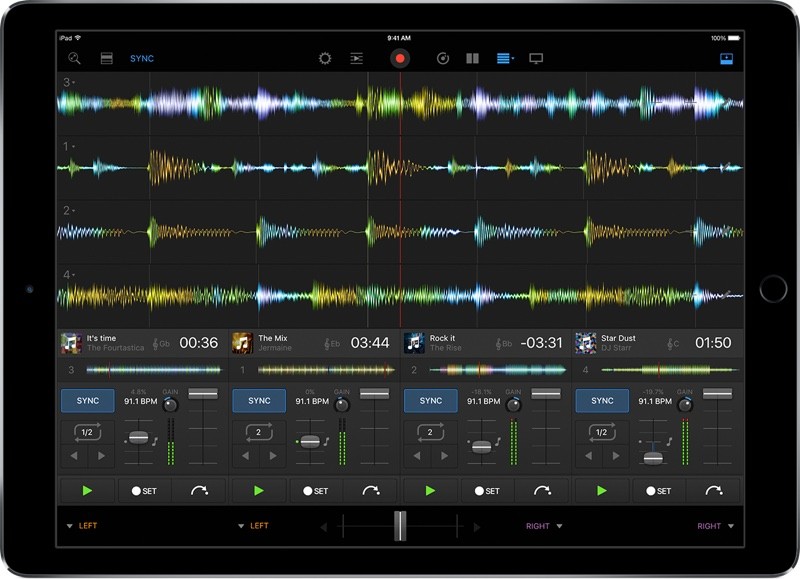 The built-in music library is able to combine local music, a Spotify catalog, and files stored in iCloud Drive or Dropbox into a central location so tracks can be mixed together and manipulated regardless of where they're stored. It also includes a song recommendation engine that's able to suggest tracks that will go well with what's playing.

djay Pro includes all of the video features from vjay, allowing users to create video mashups to go along with song mixes. The video features sync to the music and there are audio visual effects with video tweaks that mimic sound effects like echoes and strobes. Pre-bundled video content is included, and there's support for title and image overlays.

djay Pro offers support for iOS 9's split-screen multitasking feature, allowing the djay Pro app to be used with Slide Over or full Split View mode on compatible iPads. With split-screen multitasking, djay Pro has the potential to be used along with other music apps, and because it includes integration with music libraries and Spotify, it is the first app that allows users to select and control their music using the multitasking window. Apps like Spotify and Apple Music have not yet integrated multitasking support.


Specific to the iPad Pro, the new app includes a selection of more than 70 keyboard shortcuts for the Smart Keyboard that merge touch and key strokes in a unique way that can only be done on a tablet, plus access to the camera and AirPlay for recording 1080p videos and displaying them in real-time. Also unique to the iPad Pro is the ability to import and work with both 4K and 1080p video when using the app's video manipulating features. The iPad Pro is the only device that can handle two 4K/1080p video streams at once as the Mac version only supports 720p video.

The app integrates with professional DJ hardware and Cue Points, beat grid edits, metadata, and FX purchases from other versions of djay for Mac and iOS will sync to the new djay Pro app.

djay Pro was designed with the iPad Pro in mind, so the iPad Pro is going to offer the absolute best performance with the app, but it is also fully functional on other iPads like the iPad Air 2 and the iPad mini 4, aside from the iPad Pro only features.

djay Pro can be downloaded from the App Store for $19.99, a limited time sale price that will rise to $29.99 in the future. [Direct Link]

In celebration of the launch of djay Pro, Algoriddim is also making djay 2 for iPhone, normally $2.99, available for free for a limited time. [Direct Link]

If only there was support for Apple Music
Reactions: McFreggle, jayducharme, Akzel and 3 others
2

I have djay 2 and Traktor DJ. I find that Traktor does better at beat mixing but djay does better at automixing a playlist. will be interesting to see how this release changes things.
Reactions: ErikGrim and Icaras

A few times a year some new application comes out for the iPad and my dusty, aging iPad 1 won't cut it. I really wish I could afford an iPad Pro, this looks like a great application for mobile DJing. I only play once a month, but it would be nice to be able to set this up instead of a laptop and my Vestax VCI300mk2 controller + headphones.

Since I no longer purchase music since I have an Apple Music subscription, I am no longer able to use these excellent applications. What a pity.
You must log in or register to reply here.
Share:
Facebook Twitter Reddit Email Link
Top Bottom