Samsung has certainly become Apple's primary competition in the smartphone race, with the two companies currently taking nearly all of the profits in the mobile phone industry. Consequently, it pays for Apple and its fans to take note of Samsung's advances with its own hardware, and today's launch of the new flagship Galaxy S III smartphone is no exception.

The Android-based Samsung Galaxy S III offers a large 4.8-inch Super AMOLED display with a resolution of 1280x720. The large screen means that Galaxy S III measures nearly 20% taller and wider than the iPhone 4S, but is slightly thinner and actually lighter. The device also includes an 8-megapixel rear camera and a 1.9-megapixel front camera that can be used for face recognition and tracking features. 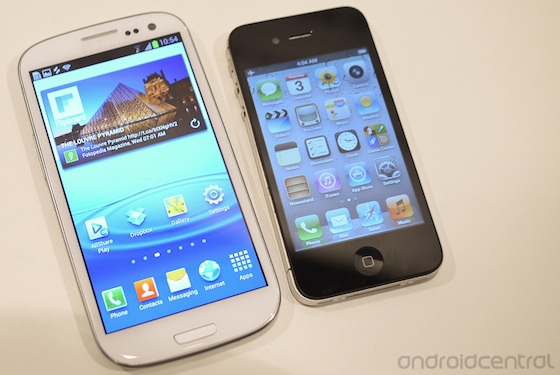 With the innovative 'Smart stay' feature, the GALAXY S III recognizes how you are using your phone - reading an e-book or browsing the web for instance - by having the front camera identify your eyes; the phone maintains a bright display for continued viewing pleasure.

The GALAXY S III features 'S Voice,' the advanced natural language user interface, to listen and respond to your words. In addition to allowing information search and basic device-user communication, S Voice presents powerful functions in regards to device control and commands. When your phone alarm goes off but you need a little extra rest, just tell the GALAXY S III "snooze." You can also use S Voice to play your favorite songs, turn the volume up or down, send text messages and emails, organize your schedules, or automatically launch the camera and capture a photo.

In addition to recognizing your face and voice, the GALAXY S III understands your motions to offer maximized usability. If you are messaging someone but decide to call them instead, simply lift your phone to your ear and 'Direct call' will dial their number.
Click to expand...

Other features include "Pop up play", which allows users to play videos anywhere on their screen while still using other apps, camera improvements including zero-lag shutter and burst shot mode, and NFC capabilities. Samsung has also partnered with Dropbox to offer Galaxy S III users 50 GB of free storage for two years, a deal that will extend to all Samsung phones and tablets later this year and see the Dropbox app come preinstalled on the devices.

In another bid to take on Apple, Samsung is also rolling out a new Music Hub service that integrates both a streaming service and an iTunes Match-like scan-and-match service to provide users with access to their own music from anywhere. As noted by The Verge, Music Hub will cost $9.99 per month for one device or $12.99 per month for up to four devices plus web access.

The Samsung Galaxy S III will launch in Europe on May 29 before extending to the United States in June and other markets around the world going forward.

Comes a size where it's not a phone, it's a tablet with a voice app.

That dwarfs the iPhone in every stretch of the imagination in terms of size. That's crazy big.
M

Oh god, I'm not a fan of the new design.

I hope if Apple does increase the iPhone screen size it is taller (like the previous mockup seen today). All of the larger LCD phones I've handed feel too large to me, but that's just my personal feelings. To each their own! Either way this gives Apple something healthy to compete against.
K

some neat features, but I have to think that someone at Apple snapped when they saw the "S voice" (in lieu of the ongoing lawsuits for Samsung copying the iPad etc..).

I'm not saying that Samsung copied that feature, but it sure seems like a shot across Apple's bow lol

I wonder how well the device control/commands works. I am hoping iOS 6 (or Siri 2.0) come with the ability to do more things via voice. It would also be nice to have a local cache of common commands so an internet connection isn't required.
V

Some of the things Samsung launched today:


In other news, Apple has had these for awhile: 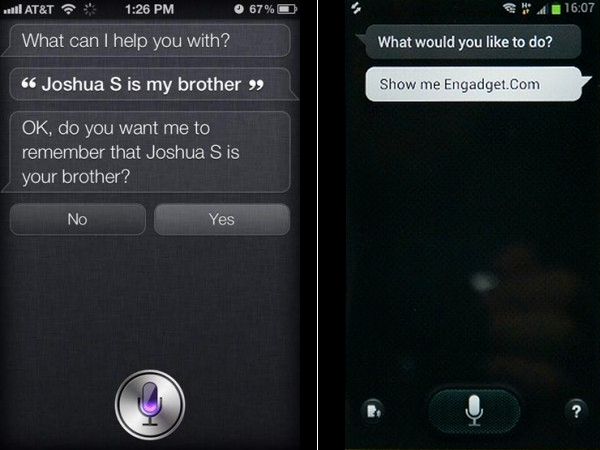 Well, competition never hurts. I would like to see facial recognition on the iphone as an option to replace the passcode lock, but I feel like having the front camera sensing your eyes like on this phone would use up a lot of battery since it would have to take a picture/video at least every few seconds.
Last edited: May 3, 2012
B

If they removed the entire bezel it would look fine
J

And Samsung stores too, I wonder where they got that idea from?

LimeiBook86 said:
I hope if Apple does increase the iPhone screen size it is taller (like the previous mockup seen today). All of the larger LCD phones I've handed feel too large to me, but that's just my personal feelings. To each their own! Either way this gives Apple something healthy to compete against.
Click to expand...

That would result in fragmentation with apps since the screen ratio would change. That wouldn't be good at all, and I don't expect Apple to do it.
B

On a similar note, stock prices for makers of "man purses" skyrocketed today; as sales are expected to get a jump from people looking for ways to carry this beast around.
M

It looks all right and kind of too big, maybe for people with huge hands...

if you actually look at it, it's not that much larger than the iphone. The only reason I ever left the iphone was due to the screen thats too dern small!

Even larger screen, to the point of being uncomfortable. And ripping off Siri.

This is coincidentally also what you'd get if you made a Samsung phone parody in advance of the announcement...

And did AndroidCentral intentionally turn down the brightness on the iPhone? Mine certainly doesn't look that dim/washed out.
Last edited: May 3, 2012
F

Looks a bit cheap and nasty

I want something that will fit in my pocket and not make me look like I am happy to see everyone all the time. These new phones are getting crazy.
A

Is that a gun in your pocket or are you just pleased to OH MY GOD ITS HUGE! Shame its your phone
L

basesloaded190 said:
That dwarfs the iPhone in every stretch of the imagination in terms of size. That's crazy big.
Click to expand...

It's almost exactly the same size as Galaxy Nexus which people use without any problems. It may be bigger than some people prefer but it's not a new form factor.

TroyBoy30 said:
if you actually look at it, it's not that much larger than the iphone.
Click to expand...