I use my iPhones without screen protectors or cases, but I make sure to avoid it getting knocked or scuffed up by putting it in a pocket without keys, coins etc.

Having the good experience of a near scratch-proof screen, I went without a screen protector on the iPhone 4. This time, there were noticeable scratches on the screen. The 4S was worse, with a couple of scratches deep enough to be rainbow lines with the display was turned on.

I have been using the iPhone 5 very carefully since launch, and the aluminium back and chamfered edges are pristine and I expect it to remain so. Not really sure how people can get scratches on the metal because I've had very good experiences with Apple aluminium products (iPod mini, PowerBook, MacBook Pro) and the iPhone 5 does not seem different. The screen is a different story though, as in less than 2 weeks there are many long hairline scratches on the iPhone 5, seemingly half as bad as the 4S now, and I have been using the 4S for almost a year, and with much less care (I've dropped the iPhone 4S several times and forgone my no keys, coins rule after seeing the scratches on the screen).

Interestingly enough, majority of the scratches are focused on the right side of the screen where I use my right thumb to scroll.

My friend's iPhone 5's display has circular scratch marks virtually all over the screen.

I believe reading that Apple moved away from Corning's Gorilla Glass at one point; there were mixed reports of the kind of glass display iPhone 4 was using. Some said it was Gorilla Glass while others mentioned another kind. Whatever it is, I think the scratch-resistance has really gone down tremendously after the 3GS. Anyone with similar experiences?

(To be precise, most of the scratches are visible when the display is at an angle, catching a light reflection.)
T

I'd rate the scratch resistance of an uncovered iP4 & 4S every bit as good as the 3S was. I carry mine in my pocket & not once have I had even the tiniest scratch after a years worth of heavy use.

Nor have I experienced any dust issues.

i believe apple started the oleophobic coating with iPhone 4 (someone correct me if I am wrong). perhaps the scratches are caused due to the coating itself..meaning, the glass itself is as scratch resistant as say the 3GS but the oleo coating scratches giving the illusion of the glass having a scratch...just a thought really, no evidence to back this up
S

chraos said:
i believe apple started the oleophobic coating with iPhone 4 (someone correct me if I am wrong). perhaps the scratches are caused due to the coating itself..meaning, the glass itself is as scratch resistant as say the 3GS but the oleo coating scratches giving the illusion of the glass having a scratch...just a thought really, no evidence to back this up
Click to expand...

The 3GS was the first iPhone with an oleophobic screen.

Check out the numerous torture tests on YouTube. iPhone 5 is the toughest yet in every way including screen scratch ability.
B

This has nothing to do with the screen getting scratched.

barryl85 said:
This has nothing to do with the screen getting scratched.
Click to expand...

Anyone who knows about Oleophobic, understands that.

The purpose of my comment was obvious, I was complimenting Apple & assuring others that may not own an iPhone, that the implementation of the Oleophobic coating was very well done.

In addition, it's obvious by some of the posts on the forum, many people are too lazy to read the information about the iPhone on Apple's web site. If they did, many would see no reason for a screen protecter.
S

Once again I must stress that I use my phone with a good amount of care, especially when it's new like the iPhone 5. Nothing in the pocket with it, and I even took special care to dust off my pockets before putting my phone in it. It seems to even scratch when I wipe the screen with a microfibre cloth.

I put my old 3GS through the same usage methods, even wiping the screen furiously with the microfibre cloth. Still scratchless unlike the iPhone 4/4S/5.

Anyone with scratchless screens want to shine a bright light on the screen to confirm that it is indeed pristine? I caught this with my 4S: 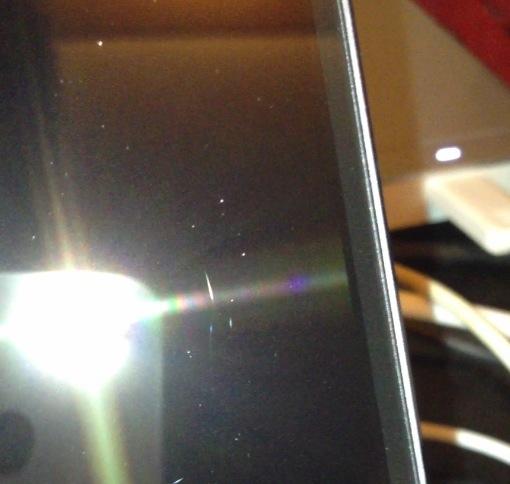 I actually contacted Corning via its Gorilla Glass Facebook page, asking whether the iPhone 5 included Gorilla Glass 2. Surprisingly, they replied that yes, the iPhone 5 does use Corning Gorilla Glass, but that they are not permitted to disclose which kind and that I should ask Apple for that information.