***Sony Vaio Z*** Stone-cold killer! It's going to be Apple Vs Sony for Arrandale imo

We've been talking about this new behemoth from Sony in the Macbook Air forums as it's the same weight as an MBA (it's a premium ultraportable!) but the specs on it are so phenomenal that it'll surely take some beating even from an MBP update. 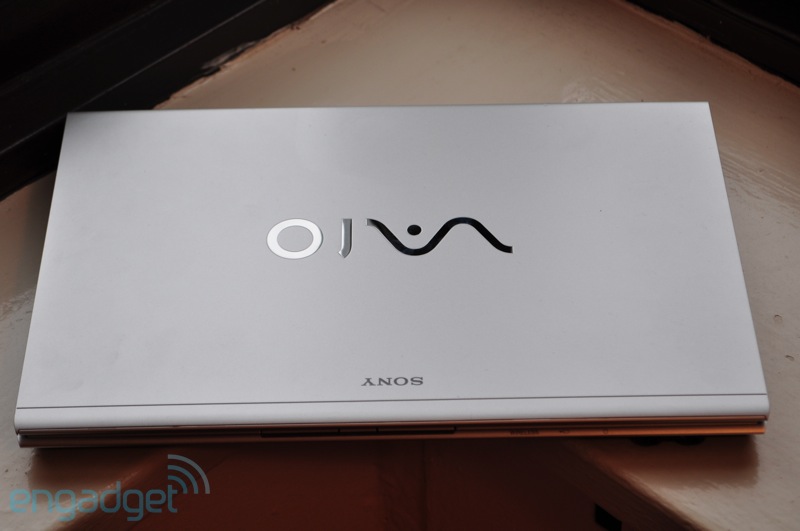 Not surprisingly the thing's almost insanely expensive at $4500+

With that repertoire, it's going to take quite a lot from Apple for me to go with them in my next update. Remember, and I say this again because of how astonishing it is, the Vaio Z is almost the same weight as the MBA (MBA is 3.0lbs) despite having x2 SSDs, an optical drive and discrete graphics!

I'm not going to pull the trigger yet though. It's a no-brainer to wait to see Apple's hand. They have a few avenues to potentially make me go for them instead for my next notebook:

1) Their multitouch trackpad is king
2) OS. Enhancing their current OS with updates (with Win 7, there's barely much distinction in quality anymore, both have positives over the other)
3) Cooling. It remains to be seen how much of a heat/noise monster the Vaio Z is. If it's unusably hot and loud, it's out. This is one of my main concerns with this as the CPU is 35W TDP.
4) USB3/Light Peak. Sony have only included USB2.0 in the Vaio Z. USB 3.0/light peak would have a huge bearing on my decision.
5) Design. If they produce something out of this earth design-wise (as the MBA almost is), then I'll shamelessly go for Apple. Design means a lot and there's not a better design in existence at the moment than the sensational-looking Air (Sony's new Vaio X is a second imo).
6) Improved IGP/Discrete interface. Eg as recent threads in the main news forum suggest Apple are looking into and may be one of the main factors for the delay.
7) OLED. With latest technology to minimize panel degradation.
8) Some other as yet unknown X-Factor. Remember, this is Apple Though in saying that, I have to say the iPad had no X-factor for me at all.

I can't imagine any company trumping the processor, RAM nor SSD that Sony have selected at this stage. With Apple's history of not incorporating bleeding-edge tech even in their flagship notebooks (the Macbook Air is a stunning exception), I'm not massively optimistic, nevertheless I can't wait to see how Apple respond especially with Steve Jobs recent quote:

Despite the Arrandale Apple notebook delays (I'm religiously following the Arrandale thread with all of you), maybe the delay signifies something. Maybe we're in for a treat

Those specs are unreal for an air rival
Comment
B

The Sony Z looks fantastic but at $4500 I think I'll have to take a pass. I don't think we can realistically hope that Apple will improve much on the macbook pro beyond the processor and graphics--maybe battery life. Steve Jobs has become uninterested in notebooks -- its harder to trap people into expensive "ecosytems" with a full powered computer.
Comment
T

The Vaio Z is one of the most appealing computers I've ever seen. Also, I think only the ridiculously specced-out version actually costs 4'500 bucks; it can be had for much cheaper if you dont get it with four (!!) SSDs. It's quite awesome that they've managed to stick a dedicated GPU with 1GB of memory and an optical drive into this compact enclosure - makes you wonder why Apple doesn't do the same in their 13-inchers. After seeing the Vaio Z, "lack of space" wouldn't be a believable excuse.

The Vaio's big achilles heel is its lack of USB 3.0. If the upcoming MBPs have it, that alone would still make me get the MBP over it.
Comment

well if Apple charged $4500 for the MBA I'm sure the specs would be alot better. I'm sure they can get much more in there at the same weight but not for the price they are charging now.
Comment

bigjnyc said:
well if Apple charged $4500 for the MBA I'm sure the specs would be alot better. I'm sure they can get much more in there at the same weight but not for the price they are charging now.
Click to expand...

Let's not forget if they did charge that much the up roar we would see in these forums!

barkomatic said:
The Sony Z looks fantastic but at $4500 I think I'll have to take a pass. I don't think we can realistically hope that Apple will improve much on the macbook pro beyond the processor and graphics--maybe battery life. Steve Jobs has become uninterested in notebooks -- its harder to trap people into expensive "ecosytems" with a full powered computer.
Click to expand...

Unfortunately true and Apple's current lethargy in introducing Arrandale notebooks may suggest that.

And yes forgot about battery life - Apple's non-replacable, real-estate-maximising batteries will almost certainly be more impressive than the Vaio
Comment

that should bring the price to a more real $3000. then it would be a killer.
Comment

wrxlvr said:
That amount is ridiculous for a laptop.
Click to expand...

So in comparison to Apple's prices and specs, that top of the range VAIO is pretty good value. Remembering it's a compact and light 13 inch.
Comment
6

OLED is still a very expensive technology. Ditch that and it could be affordable.
Comment

i just specced out a more realistic version for me. unfortunately the 4GB version is out of stock so I chose 6GB. would be 150 bucks cheaper.

6-0 Prolene said:
OLED is still a very expensive technology. Ditch that and it could be affordable.
Click to expand...

The 512 GB SSD, is a pretty penny as well.
Comment

ITS NOT $4500 ITS $1800 starting
please stop spreading disinformation and qualify your currency the dollar sign works for multiple currencies, say USD.

$4500 may be the maximum amount you may spend on a full tricked out sony vaio, but thats still cheaper than Apples 17" mbp fully tricked out.
Comment
P

view the bottom, and then view when it's opened up

Bottom = not what i believe in.

opened = reason why the out of box experience is that much better from apple.

The specs are nice and all but the asking price is ridiculous.

Specs outside of that are very impressive.
Click to expand...

While cheap laptop screens are riddled with poor viewing angles and a glossiness that make them more useful as a mirror than a display, the plus $1,800 VAIO Z's matte 13.1-inch, 1600x900 resolution LED screen is something to rave about. Horizontal and vertical angles were not an issue, and colors were incredibly bright and vivid when we watched an episode of Lost. Little to no adjustments were required to the angle of the scratch-proof screen when lying in bed to watch -- not something we can say for most laptop LCDs. The Z's speakers are decent for such a small system, and Sony has been kind enough to include a set of nice sounding earbuds in the box.
Click to expand...

btw: i think it looks great. opened or from the bottom. actually i don't get TrunksGoku's point.
Comment
P

I've never been impressed by the build quality of the Vaios that I've seen and used.

neondrgns said:
ITS NOT $4500 ITS $1800 starting
please stop spreading disinformation and qualify your currency the dollar sign works for multiple currencies, say USD.
Click to expand...

view the bottom, and then view when it's opened up

Bottom = not what i believe in.
Click to expand...

That's another area Apple may be able to trump the Vaio because of their theoretically more efficient unibody (also their non-replaceable battery). Nevertheless it looks like Sony+co are cleaning up their insides more since Apple introduced unibody - there's a youtube video with one of the Sony engineers talking about the design - less composite parts etc. Whatever design differences, it must have been very efficient to cram that much in and keep it at 3lbs
Comment
P

Yeah for that price, it better be stacked, but pound for pound, if rather buy a MacBook pro, spend half that price and buy the following model MacBook pro with the money I didn't spend with the first purchase....
Comment

So in comparison to Apple's prices and specs, that top of the range VAIO is pretty good value. Remembering it's a compact and light 13 inch.
Click to expand...

Spec's aside ... Price aside .... how is each computer to use day to day, I've owned both and can provide some input.

The Sony screen is incredible, viewing movies, photo's it's hard to beat *but* that's what TV's and external monitors are for ... I work on my computer an with resolutions like that on a 13'1" screen you get eye strain from reading fonts so small. Whether you eyes are good or bad, to read fonts that small from that distance for long periods of time is not good for anyone's eyes. There's a lot of info on the topic, (google).

Past the resolution you have the squatty 13'1" screen, again good for movies horrible for scrolling through documents, yes it's a noticeable difference to a 13'3" screen.

For a typing experience Sony's chiclet keys to Apple .... Mac's are much better to type on the keys are more round and indented with just the right amount of travel. Sony's keys seem to have sharp edges, corners, you'll notice they seem sharp after typing long periods.

The heat on the Sony is a problem, I'm not saying it isn't with Mac's either but these super high spec's create heat, the MBA's lower spec's save heat .... for a notebook that size full power isn't important to me, it's not often why they're sold, convenience and usability are the primary reasons and super hot noisy ultra-portables are no fun to use.

Use a Sony Z for a month and a MacBook Air for a month, I'd bet 9 out of 10 would choose the Air.
Comment
F