Stockholm's newly elected city council has promised that plans will not proceed for a flagship Apple Store bordering Kungsträdgården, a public park in the city center, according to Swedish newspaper Dagens Nyheter. 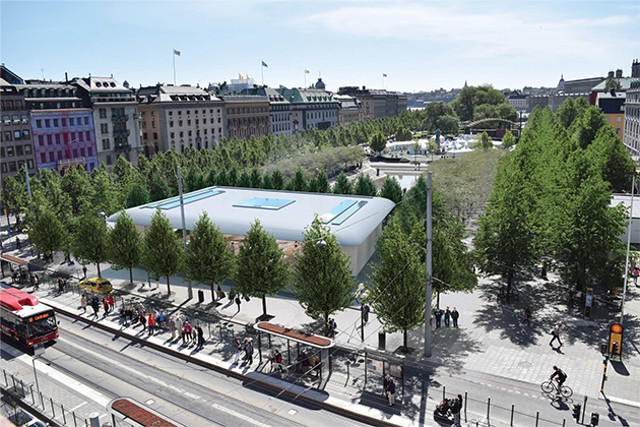 A render of Apple Kungsträdgården by Foster + Partners​
While the previous city council had approved the plans, the proposed store received some pushback from local residents, as the Kungsträdgården is a popular gathering space with concerts, events, and other activities. The new city council assured those residents that the store will not be built at a press conference today.

Earlier this year, Stockholm residents were invited to share their opinions about the proposed store during a consultation period, according to The Local. Swedish blog Teknikveckan's Peter Esse told MacRumors the city received nearly 1,800 comments about the plans, many containing negative feedback.

According to The Local, critics said the store would block the entrance to the north side of the park and change the environment from an open-air space for public use to a commercialized one. A TGI Fridays restaurant is already located on the spot, but the Apple Store was expected to be larger.

Apple had planned to host its own events and performances in the park, as part of its goal of having its stores double as "town squares."

Apple retail chief Angela Ahrendts confirmed the company's plans to open a store in Stockholm in February 2016, in a statement provided to Swedish newspaper Expressen. That report said Apple hoped to open the store within two years, but construction never began due to a series of roadblocks and delays. 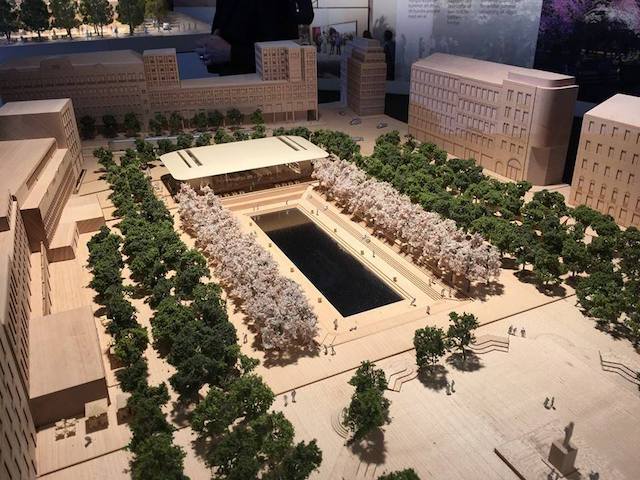 A model of Apple Kungsträdgården​
Renders of the store released by Apple and architecture firm Foster + Partners indicated that it would be situated on the north side of the park, taking over the location of a TGI Fridays restaurant. The store's design would resemble the Apple Park Visitor Center and Apple Michigan Avenue in Chicago.

It's unclear if Apple will accept the decision or try to push forward with its plans, as it has with its proposed store at Federation Square in Melbourne, Australia. Apple did not immediately respond to our request for comment.

That's a really nice model with the trees and pond, but it seems weird for it all to lead to the store of a trillion dollar company...
Reactions: Saturn007, Substance90, Lill-Q and 7 others
Comment

As a Swede (not living in Stockholm), I think that it would be nice with an Apple Flagship Store i Stockholm. A nice tourist attraction of sorts. Too bad.
Reactions: G5isAlive, tongxinshe, Oberhorst and 3 others
Comment

and neither building is the best
Reactions: Reason077, August West and vipergts2207
Comment
W

The TGI Fridays was gonna be teared down anyway and the building it was housed in was never really approved officially.
Basically the city doesn't want the park to be commercialized.
Reactions: Huw Price, Saturn007, DrEasy and 23 others
Comment
D

Any building right there in that space looks a lil out of place TBH.
Reactions: Saturn007, Substance90, Morgenland and 6 others
Comment

Good. I like my Apple products but that is not the place for an Apple Store.
Reactions: Huw Price, Saturn007, darkredbbb and 19 others
Comment
T

I agree. But there is already a restaurant there. I say tear down the restaurant and make the area 100% park.
Reactions: Substance90, carlsson, DrEasy and 22 others
Comment

It's up to the locals.
Reactions: Hank Carter, Reason077, G5isAlive and 3 others
Comment

TGI Fridays is, after all, far more aesthetically pleasing, not to mention the peaceful smell of fried food.
Comment
G

breather said:
As a Swede (not living in Stockholm), I think that it would be nice with an Apple Flagship Store i Stockholm. A nice tourist attraction of sorts. Too bad.
Click to expand...

There is the one in the Täby Center mall, a sufficiently affluent location, I would think. Though I can also see how it might not be entirely satisfactory (to Apple), as it is a bit remote with no subway going there.

So yeah, Kungsträdgården would be as central as it gets, but I can see how the residents do not like it. It makes it look like the park is just there to house the Apple store.

Maybe Apple can talk the King into letting them rent a wing of the royal palace.
Reactions: Mainyehc, Duckyduckbumps, breather and 1 other person
Comment

Apple should look for another location, this isn't a winnable PR instance (even if a TGI Fridays....talk about commercializtion...sits there now).
Reactions: Lill-Q, davidespinosa, Mainyehc and 3 others
Comment

Stick it where the sun don’t shine, Apple.
(stick it underground, & make the public space a lovely park)

If you really want to win the public’s favor, build a huge public parking level under it.
Reactions: Lill-Q, JRobinsonJr and whichweather
Comment
R

DotCom2 said:
Any building right there in that space looks a lil out of place TBH.
Click to expand...

Some sort of temple, shrine, or memorial might be appropriate.

How about a huge statue of Steve Jobs on horseback?
Last edited: Oct 12, 2018
Reactions: Lill-Q, Mainyehc and Duckyduckbumps
Comment
T

Why not an Ikea? or a Walmart? or Aldi? It is a park, not retail space.
Reactions: Mainyehc and Marekul
Comment

I’d probably side with the Swedish residents if it weren’t for the fact that a TGIF is already in that spot. A TGIF?! LOL. You can’t tell me an Apple store would be less aesthetically pleasing than a TGIF! Bwa-ha-ha!
Last edited: Oct 12, 2018
Reactions: snek, ILikeAllOS, Lill-Q and 7 others
Comment
W

It doesn't seem like the Apple store fits easily into the surrounding environment. The boxy shape completely overpowers the public park and hence, I would tend to agree with the city's decision. Still, there could be less intrusive designs such as a frosted-glass-roofed underground store. Once the TGIF is removed, the square will have additional floor space which should be kept as open and accessible. An unobtrusive yet straightforward access to the Apple store below the square could be a way to satisfy both parties.
Reactions: Lill-Q
Comment

If I would still live in Stockholm, I wouldn’t like Apple to ’destroy’ Kungsan either.
Apple stores are nice But not that nice for a park.
Find another place in Sthlm Apple.

And you could find a place in Gothenburg too, we have none down here. Still we are Swedish 2nd biggest city. They even have 2 around Malmö which is the 3rd.
Reactions: Reason077 and Lill-Q
Comment

Seems a bit extra of the incoming City Council since the previous one already approved the plans. Apple has spent years seeking and winning approval, which was no small task. Will the City compensate Apple for all its expenses. Not very business friendly.
Reactions: G5isAlive, b76302, Oberhorst and 1 other person
Comment
You must log in or register to reply here.
Share:
Facebook Twitter Reddit Email Share Link
Register on MacRumors! This sidebar will go away, and you'll see fewer ads.
Sign Up
Top Bottom