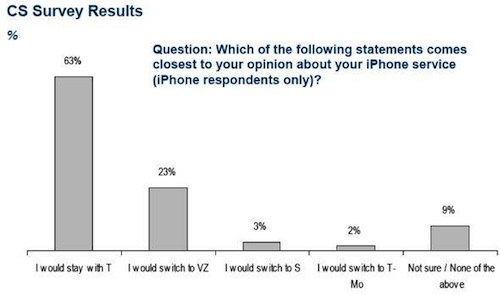 Credit Suisse yesterday released the results of a customer survey examining what current customers are likely to do once AT&T loses its exclusivity for the iPhone in the United States. Silicon Alley Insider shares some of the charts from the presentation, which suggests that 23% of AT&T's iPhone customers could defect to Verizon if the phone were to launch on the carrier early next year.

A new survey from Credit Suisse says 63% of iPhone owners will stick with AT&T, even if it loses the exclusive right to sell the phone.

Where would AT&T iPhone owners go if given the chance? 23% will join Verizon, while 3% will go to Sprint, and 2% will go to T-Mobile.
Click to expand...

Credit Suisse views AT&T's surveyed retention rate of 63% as a positive, calling fears of the effect of the loss of iPhone exclusivity for AT&T overblown. 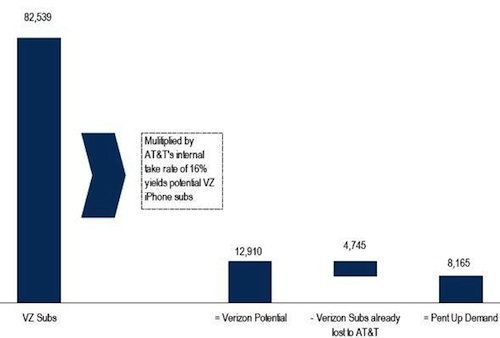 Following the same rationale as that used by Morgan Stanley earlier this year, Credit Suisse estimates that approximately 8 million current Verizon customers would move to the iPhone should it become available on the carrier. That figure is calculated by using the internal iPhone adoption rate for AT&T of 16%, multiplying it by Verizon's customer base of 82.5 million, and accounting for nearly 5 million former Verizon customers who have already moved to AT&T for the iPhone.

Honestly, I'd be totally torn if I had a choice.

Those speeds are something Verizon can't do anything about. EVDO Rev A is all they can offer, and it's not comparable to HSPA.

To go to VzW would mean giving up a decent amount of data capability, while gaining coverage and voice improvements.

No clear winner for me.

And nothing of value would be lost....

I don't know how Apple and VZW can keep ignoring numbers like this. Work something out already, and bring the iPhone to VZW!

So if 23% of people jump ship does this mean AT&T 3G signal gets better? I remember reading that 3G is shared and the more people in your area using it the slower it is....can somebody confirm this? oh and adversely will VZW network suffer the same signal fate when more smartphones are added to it's network?

I for one am staying w/ AT&T because I have never really had issues with service. If anyone else lives near SF you will know how bad the signal can be.

DTphonehome said:
I don't know how Apple and VZW can keep ignoring numbers like this. Work something out already, and bring the iPhone to VZW!
Click to expand...

Small numbers compared to the overall GSM market. So, there is no incentive, plus Verizon isn't helping by putting out all those ads targeting the iPhone.
G

Yea but this isn't the real issue

Ok sure...but think about it, they already have the iPhone and how many of them are under contract and risk a $275+ fee for canceling their service. To me the fact that 23% would bail is not good news.

Personally I'm not an AT&T customer and won't be any time soon because their coverage STINKS in my area. I would LOVE an iPhone but the fact that it is AT&T only has a Droid Incredible in my pocket. The DAY the iPhone is available on the VZW network I will place my order and I assume wait for my new phone even though I will (hopefully) be no where near my contract renewal...I will pay the $500 or whatever the phone will cost.

One thing many people forget when thinking about the switch to Verizon is their current network's inability to do calls and data simultaneously. While this isn't a dealbreaker for me, and I would still switch to Verizon if the opportunity presented itself, there are plenty of others who would not go just because of this.

If AT&T actually believes there is a real chance of them losing 25% of their iPhone customers, they will probably be scared enough to actually solve some of the signal problems, I would think.

My neighborhood still has no 3G service in the middle of Houston TX (Hermann Park area) and I drop calls daily around my apartment (although other parts of town are ok).

utwarreng said:
One thing many people forget when thinking about the switch to Verizon is their current network's inability to do calls and data simultaneously. While this isn't a dealbreaker for me, and I would still switch to Verizon if the opportunity presented itself, there are plenty of others who would not go just because of this.
Click to expand...

I thought they are rolling out LTE soon. That will alleviate the data/cellular debacle

0.66/18M according to the numbers reported above.

Not sure what the except question was. Was it if you would switch early next year or was it would you switch once your contract expires? With iPhone4 I just got locked into a new 2 year contract, so it will be quite some time until I can switch.

If it was 'once your contract expires' - pretty impressive for AT&T. If it was 'early next year', well not so good for AT&T
C

utwarreng said:
One thing many people forget when thinking about the switch to Verizon is their current network's inability to do calls and data simultaneously. While this isn't a dealbreaker for me, and I would still switch to Verizon if the opportunity presented itself, there are plenty of others who would not go just because of this.
Click to expand...

Actually, there's new technology called SVDO which allows for simultaneous voice and data on CDMA networks with very minimal network reconfiguration. I believe Qualcomm has a part that's sitting on a shelf, waiting for a handset manufacturer.

A while back, there was an article claiming that a group of Apple engineers had visited Qualcomm and looked at the feasibility of building a CDMA iPhone and decided that the engineering required would basically have made it an entirely new phone. I'm sure Apple continues to dabble with a CDMA prototype in their labs, but whether or not they are ready to commit the resources necessary to develop the device to steady state production standards is iffy. It probably hinges on the ability to market this phone in non-American CDMA markets; I doubt if they'd proceed if it were only going to Verizon and Sprint here in the U.S.
O

If you get good reception from AT&T why would you leave. What they should ask is, if Verizon or T-Mobile get the iPhone will you switch from Blackberry or android?
V

I had Verizon for three years.

Worst customer service in the history of man.

50% of those 20% of people will regret their move after they spend 10 hours on the phone with jerks when Verizon screws up their bill - then they will re live that pain every month till their contract is over.

But hey, Verizon does have lots of fees!
U

Grasschopper said:
Ok sure...but think about it, they already have the iPhone and how many of them are under contract and risk a $275+ fee for canceling their service. To me the fact that 23% would bail is not good news.
Click to expand...

Everyone who upgraded to iPhone 4, sure. But not the rest of us. One wonders how the survey results would've panned out if AT&T didn't allow pretty much everyone to upgrade to an iPhone 4 at on-contract prices.

The one and only thing that would make me consider not switching to Verizon when the opportunity comes is the price. My limited knowledge of Verizon data plans suggests I could not have an iPhone on Verizon for the $82 and change I'm currently paying AT&T. (I have the minimum minutes and texting plan.) The question is how much more would I have to pay?

My AT&T coverage and performance stinks. However it is now getting to the point that whomever has 4G first in my area with an iPhone is who I'll go with.

Verizon customer service blows. I call them everyday (for work) and they're completely useless most of the time.

I'll stick with AT&T. If T-Mobile can keep their cheap rates, then maybe I'll go with them.

But of course I wasn't involved with this survey.

Verizon has no plans to roll out "real" LTE. Their plan is to roll out LTE for data at speeds that are barely faster than the current AT&T 3G. They plan on launching with phone that are CDMA compatible as a fallback (EVDO) for data and CDMA for voice because the voice standard is not ready for LTE yet.

Because the LTE standard has not been fully ratified with a voice standard, other carriers around the world are going HSPA+ first to have it as a fallback because LTE and HSPA+ can coexists and use much of the same infrastructure.

Verizon will not get an iPhone unless if they go with LTE for voice and data like everyone else and they have to agree to not expect any branding or customizations.

Verizon could have the iPhone today if they followed in the footsteps of CDMA carriers in Canada and Australia which all switched to HSPA+.

The advantage LTE has over of HSPA+ is lower latency but HSPA+ can achieve download speeds faster than what Verizon is promising with LTE.

whoa i can't believe these numbers... but if verizon doesn't have voice/data simultaneously then I think these numbers will not reflect the general outcome of the data being present to the public at this juncture.
T

I wonder if the people answering this survey realize they will have to buy a brand new iPhone if they jump to another carrier (not to mention pay contract cancellation fees in many cases)? I wonder how much that would change the numbers?

When I ditched AT&T for dropping calls once a day in my area I went with Sprint for the Pre. If Verizon had the iPhone I'd be a happy Apple iPhone owner right now.

Since switching to Sprint and the EVO I have been pretty happy. I now have service at my house (4G) and am not constantly dropping calls. I also have signal at work which is an AT&T deadzone.

Don't let the door hit u on the way out.