The Jungle Book, An American Story in Three Parts (cute) 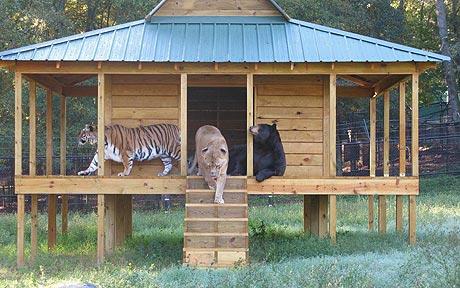 Rescued eight years ago during a police drugs raid in Atlanta, Georgia, the three friends were only cubs at the time and barely two months old.

They had been kept as status symbol pets by the drug barons.

Delivered to the Noah's Ark animal rescue centre in Locust Grove, Georgia, the decision was made to keep the youngsters together.

"We could have separated them, but since they came as a kind of family, the zoo decided to keep them together," said Diane Smith, assistant director of the Noah's Ark zoo.

"To our knowledge, this is the only place where you'll find this combination of animals together, they are our BLT, (bear, lion and tiger).

Living with the zoo's founders for the past eight years, Shere Khan, Baloo and Leo have now moved to a purpose built habitat were the US public can now witness first hand their touching relationship.

"It is wonderful and magical to see a giant American Black Bear put his arm around a Bengal tiger and then to see the tiger nuzzle up to the bear like a domestic cat.

"When Leo wakes up the three of them mess around for most of the day before they settle down to some food."

Surprisingly for three apex predators with the power to kill with a single bite or swipe of their paw, they are very relaxed around each other.

"As they treat each other as siblings they will lie on top of each other for heat and simply for affection.
Click to expand...

Only in America, people. Normally, I am not much for zoos, because I don't like seeing animals in cages, but this is too cute.

reminds me of this video

i love these types of stories

dukebound85 said:
reminds me of this video

Very cute. Christian behaves just like a giant Iago, only some 20 times the size of my cat.

dukebound85 said:
reminds me of this video

i love these types of stories
Click to expand...


But is it true, or edited for our heart-strings?


But is it true, or edited for our heart-strings?
Click to expand...

Snopes stands up for the Christian the Lion story....


But is it true, or edited for our heart-strings?
Click to expand...

here is an interview
http://www.youtube.com/watch?v=z_dWzF-vSXQ&feature=related


mkrishnan said:
Snopes stands up for the Christian the Lion story....
Click to expand...

North American sports wiped out in one day

When Did Americans Lose Their English Accents?

Billionaire Elon Musk credits his success to these 8 books