You are using an out of date browser. It may not display this or other websites correctly.
You should upgrade or use an alternative browser.
X

Here is a good list of processes to populate the monitor: 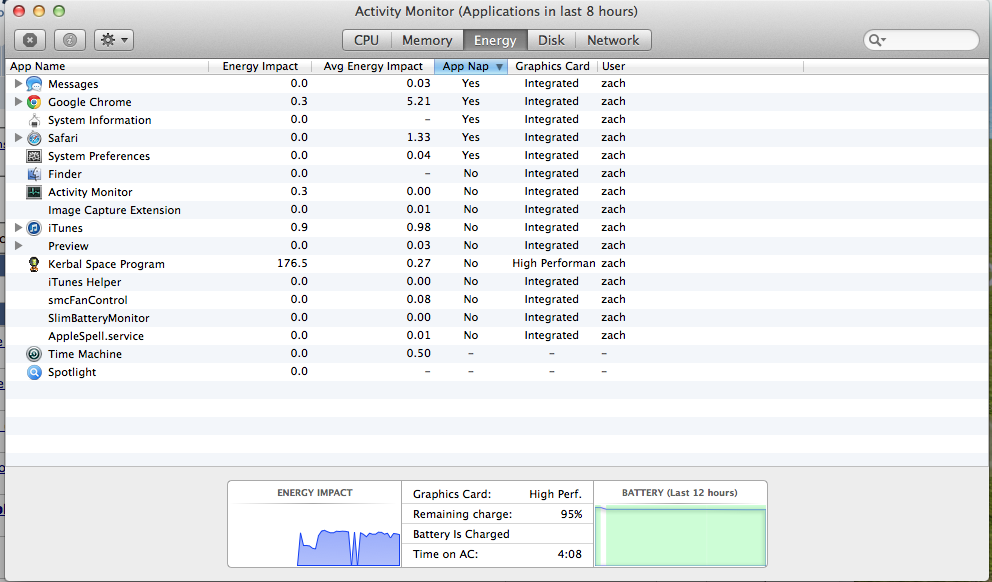 I really like the battery graph and the list of apps using which GPU. The amount of Apps that use App Nap is relatively low right now but I expect that to rise and perhaps become a requirement for future App Store apps.

I do not know what the new Energy Impact is in units. What is this number and what does it mean? As of this writing, Kerbal Space Program is causing an Energy Impact of 179.9. Are 179.9 baby seals getting clubbed per second?
KSP is currently using about 45% CPU.

I really can't get a grasp at what the unit of measurement is. I have a 45W CPU + a 30W GPU and both under load can sometimes peak around ~80 watts.

Regardless, being without a power supply, the energy tab can be someone's best friend.

If my recollection of the developer presentation slide on App Nap is correct, they are an abstract unit Apple created to represent several factors related to energy usage meant to compare programs relatively.

I don't believe you can directly relate them to one simple unit, because they are from an arbitrary formula of multiple factors.

I am going to find it again to see if I can get anything more precise.

I found it. To get the units they look at CPU usage, interrupts, and wakeups... track those using counters and apply that to the energy column as a relative measure of an app. <- That's an almost verbatim quote, but not verbatim enough for quote marks.
Last edited: Jun 26, 2013
Comment
X

OPENSTEP said:
I found it. To get the units they look at CPU usage, interrupts, and wakeups... track those using counters and apply that to the energy column as a relative measure of an app. <- That's an almost verbatim quote, but not verbatim enough for quote marks.
Click to expand...

I know this is an old thread, but I have a question. Since Apple have made it kind of difficult to calculate the energy impact for the normal user, and you have to search the internet to even get an idea of what the number means, can you make an assumption of how high the number would be, before we start to worry? Maybe you or someone with the knowledge could divide the amounts of mysterious-energy-value into groups? Like "little enough to not worry at all" and "close the application if you don't use it" and "connect the power supply, if you don't want your computer to die in a minute" and "ridiculously high consumption". It's just that when it's only a number with no indicator, I don't know what to think of it. I hope you get my point despite my difficulties with formulating a question.
Comment
You must log in or register to reply here.
Share:
Facebook Twitter Reddit Email Share Link
Register on MacRumors! This sidebar will go away, and you'll see fewer ads.
Sign Up
Top Bottom