Twitter has confirmed to TechCrunch that all of its first party iOS app users will today begin to see a new location-based feature that aggregates tweets tagged to a specific geographic location. Called "Twitter Location Feeds," the update lets users scroll through tweets and profiles surrounding locations like the headquarters of a business, sporting event, music festival, or an entire city.

Powered by Foursquare, users can jump into any Location Feed they want by first tapping on a tweet to check out more details, then tapping on the location tagged within to see a list of tweets compiled within the area. Once in the feed for any specific location, users can scroll through all tweets posted by users in the area, or specify a media-only category to stick with photos and videos. 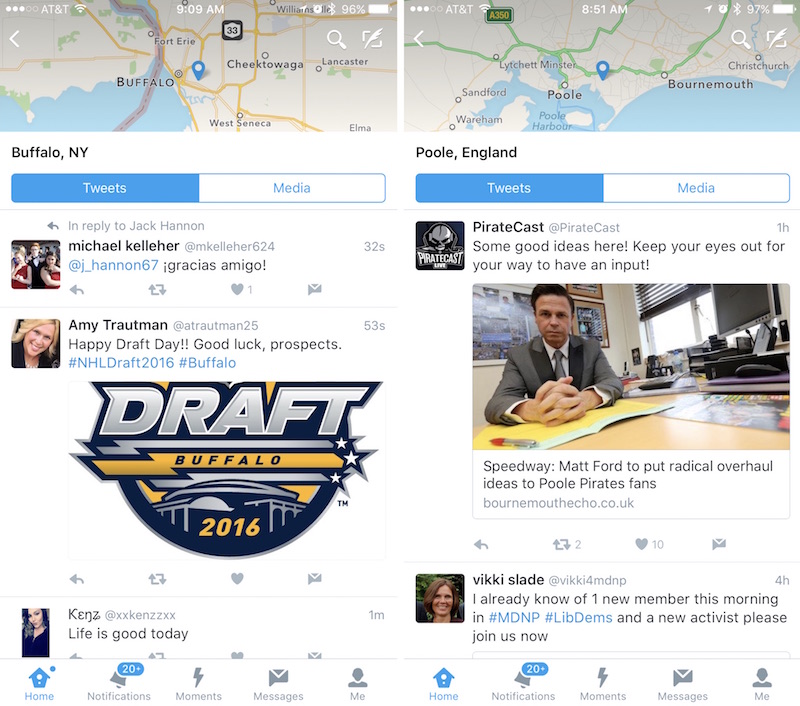 Location feeds will unlock the ability for users anywhere to immerse themselves in a place. You could drop into a sporting event, see what people think about a museum, find the favorite dish from a restaurant, check the vibe at a local park, virtually visit a concert, or even become engulfed in a protest.

Instead of browsing a noisy hashtag with tweets from everywhere, you can discover what people on the ground are saying. This ability to immerse yourself in an unfiltered sea of information has always been one of the best parts of Twitter.
Click to expand...

Due to its focus on navigation starting from tags in other users' tweets, a lot of the functionality of Location Feeds rides on automatic location tagging, which many users might have turned off. As such, TechCrunch considers that an update with searchable geographic areas is "a sensible next step."

Twitter said that Location Feeds will be rolling out to all iOS users starting today, and that more platforms are planned for the future, but didn't give any specified information on which will be coming next. Today's news follows an update to the social network earlier in the week that expanded its video lengths from 30 to 140 seconds.

Didn't Tweetbot have this for quite some time now?

Twitter is locked from using my location.
This feature is cool but I don't think I need it.

However, if this feature allows me to "view those tweets with location info tagged" then that would be fine.