What breed of dog is the hungriest you have ever seen?

Today I saw this dog that literally inhales food. No chewing at all.

It's a pug. This dog was voracious beyond belief.

I think it depends on the dog (as they do have personalities of their own) but I've found Golden Retrievers to be rather greedy with the food.

My labrador breathes food, I'm amazed she even digests it.

Pugs have to do that. Just listen to them breathe. If they take time to chew it cuts off their air and they might suffocate. They are such funny sounding little dogs. Another little known tidbit is that if you smack them lightly on the back of the head then their bulging eyeballs will pop out on the floor. 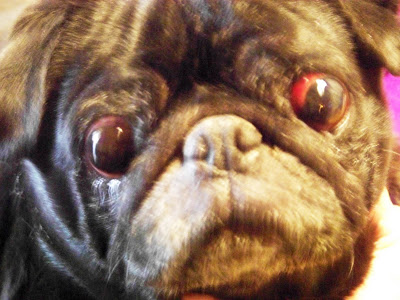 Sorry to bump an older thread, but I have to agree. Pugs and the pug mixes are food vacuums! Beagles have quite an appetite as well. We have a Puggle (Pug and Beagle mix) puppy and she inhales food. It's gone before it even reaches the bowl.

My To Cavalier king charles spaniels - They inhale there good. Specially if there given chicken. Even if you hand feed them a bit you risk loosing your finger tips

My beagle/German shepherd (mostly beagle though) mix has one hell of an appetite. She inhales food.

Labradors...bar none. My two labs would eat me out of house and home if they could...

Always a day away

Second that. Labs are borderline neurotic and suck down food like a Shop-Vac. They don't do anything slowly. A lab's idea of chilling out and relaxing is snorting Rockstars while mattress surfing across gravel.

We have a beagle. Sigh.

Went away for a weekend. Had a dogsitter look after our dog.

So in the morning, he filled the dog's bowl with food. Naturally, he inhaled it.

So the dogsitter, thinking that my wife and I are the worst parents ever because we apparently never feed him, filled his bowl up again.

Nom*nom*nom*nom*nom. Cleaned out. And the dog even started licking the bowl trying to get every last crumb.

So...the dogsitter filled his bowl a third time. Same story. Except this time, the dog puked it all up.

So the dogsitter went to get a mop.

By the time he got back, the dog had eaten all of the puke. And licked the floor clean.

SwiftLives said:
So...the dogsitter filled his bowl a third time. Same story. Except this time, the dog puked it all up.

So the dogsitter went to get a mop.

By the time he got back, the dog had eaten all of the puke. And licked the floor clean.
Click to expand...

My german shepherd eats every meal like she hasn't eaten in months, begs for scraps all the time, steals entire plates of food off the table/counter, eats mysterious dead rodents she finds in the yard, eats the cat's poop and puke and her own puke. She was actually quite well trained at one point but my family is full of softies. Ridiculous.
P

My beagle eats 1/2 cup of food in about 18 seconds (yeah I timed her) if something looks like food, or can be chewed and swallowed she will eat it, but surprisingly not furniture or pillows, but everything else is fair game. But yeah I guess what I am trying to say is that she inhales food like its her job.
P

I gotta agree, my pug is a beast when it comes to food. The other day he almost choked to death when he stole my nephew's PBJ sandwich out of his hands. He doesn't chew his food, just inhales it.
You must log in or register to reply here.
Share:
Facebook Twitter Reddit Email Link

R
What is the worst movie you ever watched?

Mar 22, 2020
Helpplease123
H
Register on MacRumors! This sidebar will go away, and you'll see fewer ads.
Sign Up
Top Bottom