What will be the next iPhone's GPU ?

What are the expectations for the next iPhone's GPU ?
Which PowerVR will be included in the device ? Any benchmarks ?

ARM has just released a roadmap for its upcoming GPU, and it's quite impressive, a comparaison with the upcoming PowerVR serie would be interesting.

The current flagship for ARM's mobile graphics technology is undoubtedly the Galaxy S III, which contains a quad-core Mali 400 GPU and delivers some wild benchmark scores. By the end of this year though, we should see a whole new generation of Malis -- not just a Mali 450 for mid-range handsets, but also the quad-core T604 and the eight-core T658, which are based on ARM's Midgard architecture and are taking forever to come to market. Now, to whet our appetites even further, ARM has just added three more variants of the chip to its roster, which can almost be considered the next-next-generation: the quad-core T624, and the T628 and T678, which are both scalable up to eight cores.
The trio's headline feature is that they promise to deliver at least 50 percent more performance with the same silicon area and power draw, with the explicit aim of delivering "console-class gaming," 4K and even 8K video workloads, as well as buttery 60fps user interfaces in phones, tablets and smart TVs. The premium T678 is aimed at tablets specifically, and in addition to allowing up to eight cores also doubles the number of math-crunching ALUs per core, which means that its compute performance (measured in gigaflops) is actually quadrupled compared to the T624. However, there's one other, subtler change which could turn out to be equally important -- read on for more. 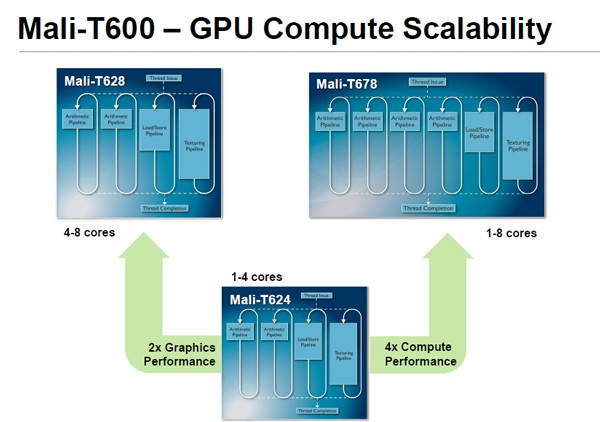 So, what is that secondary improvement? It's ARM's curious decision to dedicate a small section of silicon (two percent, in fact) solely to running a new graphical compression codec, which the company has designed in-house and handed over Khronos as an open standard. The codec -- called Adaptive Scalable Texture Compression (ASTC) -- is all about stopping the "fragmentation of standards" that game and app developers have to deal with. Currently, a developer has to choose different codecs to achieve different levels of texture compression for different platforms: for example, they might choose an 8-bit-per-pixel codec for desktop and then an entirely separate 4-bit-per-pixel codec for mobile. ASTC will put an end to all that, ARM claims, by supporting all manner of textures, color standards and bit-rates, and thereby becoming the "the new standard" which has "no competitors." This remains to be seen, of course, but somewhere on the outskirts of Cambridge, UK, and audible only to coders who know what an 8-bit HDR BPTC texture is, a gauntlet may have just hit the floor. 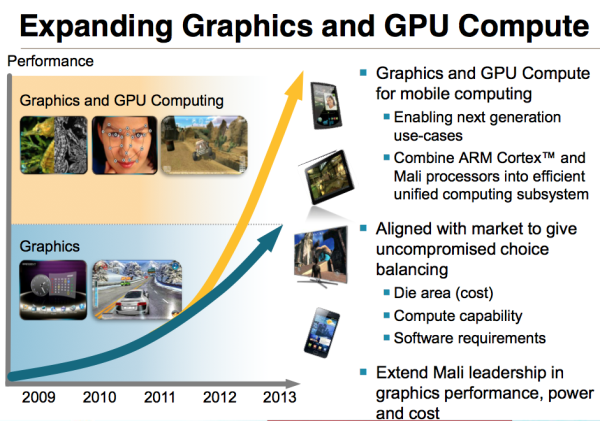 In our discrete GPU reviews for the desktop we've often noticed the tradeoff between graphics and compute performance in GPU architectures. Generally speaking, when a GPU is designed for compute it tends to sacrifice graphics performance or vice versa. You can pursue both at the same time, but within a given die size the goals of good graphics and compute performance are usually at odds with one another.
Mobile GPUs aren't immune to making this tradeoff. As mobile devices become the computing platform of choice for many, the same difficult decisions about balancing GPU compute and graphics performance must be made.
ARM announced its strategy to dealing with the graphics/compute split earlier this year. In short, create two separate GPU lines: one in pursuit of great graphics performance, and one optimized for graphics and compute.
Today all of ARM's shipping GPUs fall on the blue, graphics trend line in the image above. The Mali-400 is the well known example, but the forthcoming Mali-450 (8-core Mali-400 with slight improvements to IPC) is also a graphics focused part.
The next-generation ARM GPU architecture, codenamed Midgard but productized as the Mali-T600 series will have members optimized for graphics performance as well as high-end graphics/GPU compute performance.
The split looks like this: 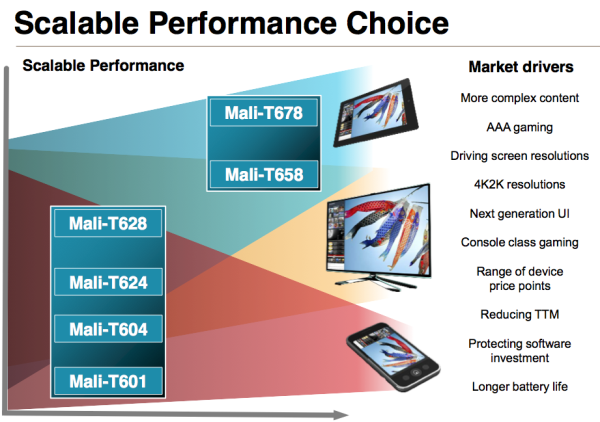 ​
The Mali-T600 series is ARM's first unified shader architecture. The parts on the left fall under the graphics roadmap, while the parts on the right are optimized for graphics and GPU compute. To make things even more confusing, the top part in each is actually a second generation T600 GPU, announced today.
What does the second generation of T600 give you? Higher IPC and higher clock speeds in the same die area thanks to some reworking of the architecture and support for ASTC (an optional OpenGL ES texture compression spec we talked about earlier today). 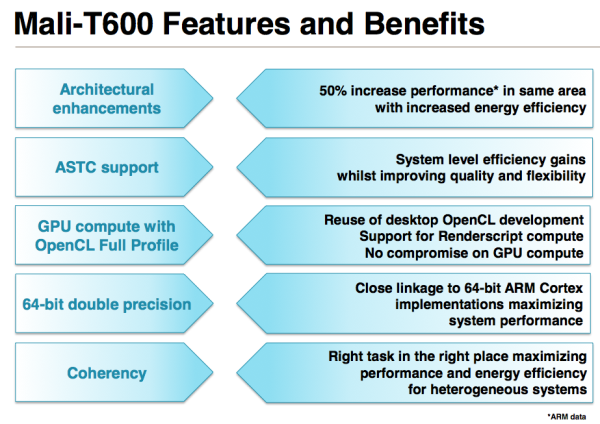 Probably a Neural Net Processor, a learning computer. If it isn't, I'm getting a Galaxy-Nexus-Prime-LTE 4G-Plus.
Comment
L

Hopefully not a Mali. Let's stick to the big Imagination Technologies guns please.

I assume it will be a quad core SoC with the SGX543MP4 unit from the new iPad / PS Vita.
Comment
A

FSMBP said:
Probably a Neural Net Processor, a learning computer. If it isn't, I'm getting a Galaxy-Nexus-Prime-LTE 4G-Plus.
Click to expand...


OP, probably the A5X with slower clock. They will be trying to max battery life after all.