Why does Apple decide to stay with a small screen?

Why is Apple retaining the small screen size when Android users get the luxury of indulging a big screen?

What's the point? And why are people saying it's going to boost sales?

I find Android phones to be too wide for comfortable one handed operation.
T

Because your thumb can touch anywhere on the screen without moving your hand as much as you would on a larger display.

How is it "small" if it is still going to be a bigger screen? So it is tall instead of wide, at least we're still getting a bigger screen. I think once you play around with it, it'll be fine. If the keyboard is an issue, turn the phone sideways.

No, they're just more comfortable, and can hold a lot more stuff in addition to your phone.

Coldsnow said:
Why is Apple retaining the small screen size when Android users get the luxury of indulging a big screen?

What's the point? And why are people saying it's going to boost sales?

Don't iPhone users also want a bigger screen?? Is there something I'm missing?
Click to expand...

Yeah, you're missing the fact that a bigger screen demands a bigger device. Many people don't want that because it would be less comfortable to operate and carry. Fortunately, Apple is of the same mindset. For now at least.

Luxury is for the weak.
T

You know, given that Apple is pushing voice recognition via Siri, the one-handed argument about the small screen size seems less and less reasonable to me as time goes by. If I can, I use Siri to dictate rather than typing. So much easier and quicker for me. Thus I'd like to see a larger screen.

I suspect their research indicates overwhelming support for the current screen size.

If you want bigger screen then buy hdtv adapter for your iphone and display it on 60 inch screen viola!

Seriously, i hope apple sticks to the current screen size of iphone as it is perfect for 1 hand operation.
G

Simple, it's a phone! If you want a tablet, buy one.
W

I can understand some people like smaller screens. However I would like to have choice. I'd immediately buy a 4.5" iphone and leave Android. And have a 3.5" and 4" iPhone for people who prefer mobility.

Most people here will say it is because "it's the perfect screen size" because at some point in the previous decade it was the perfect balance between power consumption and usability. They'll also say that Steve Jobs thought it was the best screen size, and thus there is no space for improvement.

I'd argue, however, that they settled with a 3.5" display because - in 2007 - it was expensive to produce these kind of displays. The bigger, the more expensive it is. I'd also argue that, at the time, they simply weren't able to ship an iPhone with a bigger display (GPU requirements, power requirements, costs).

That limit (GPU requirements, power requirements, costs) is now gone. However, we now have an App Store with hundreds of thousands of apps. You simply can't ignore all those apps.

Also, it has nothing to do with size. The rumoured 4-inch display for the next-generation iPhone, could easily fit in the current iPhone 4S' design. It would look like this: 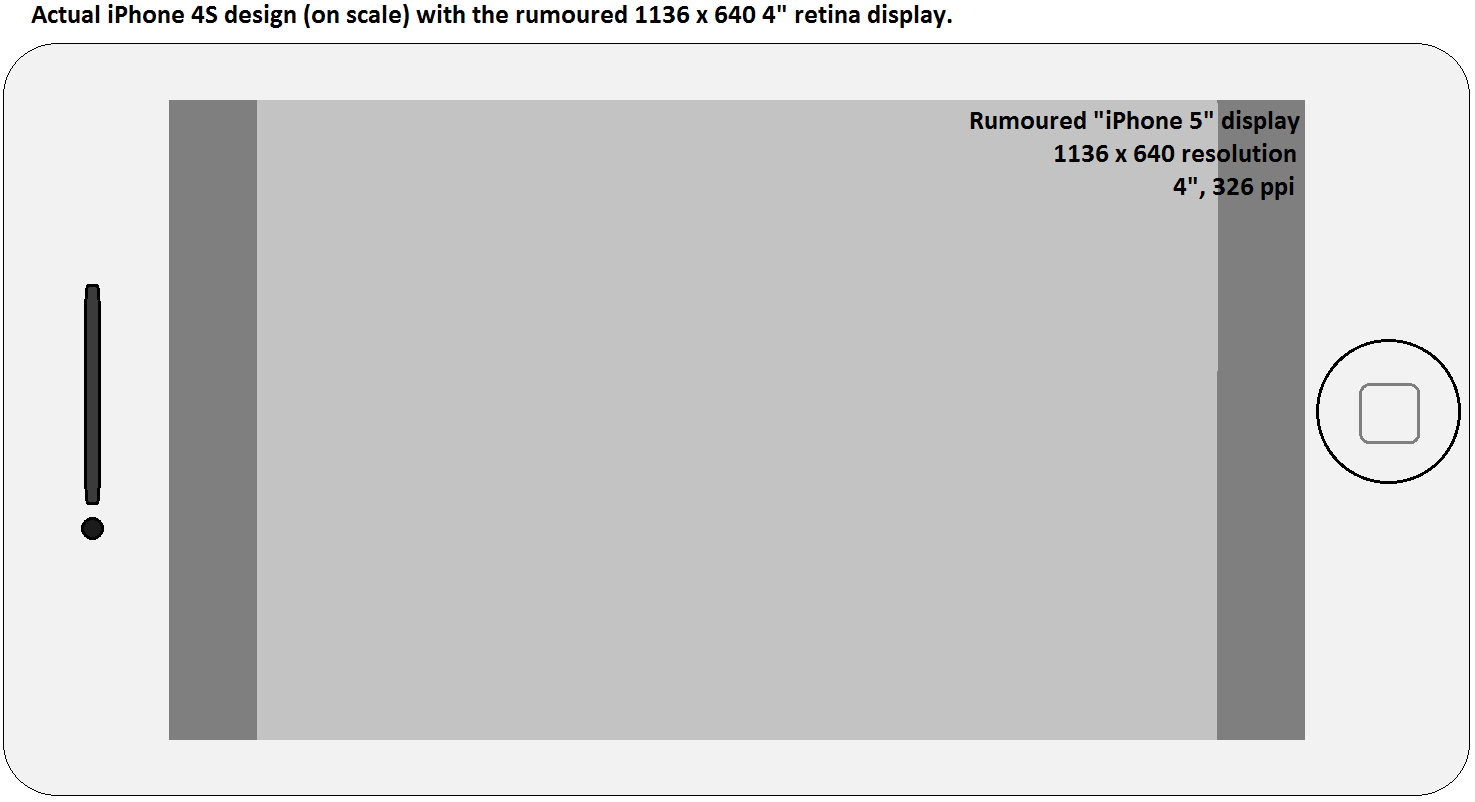 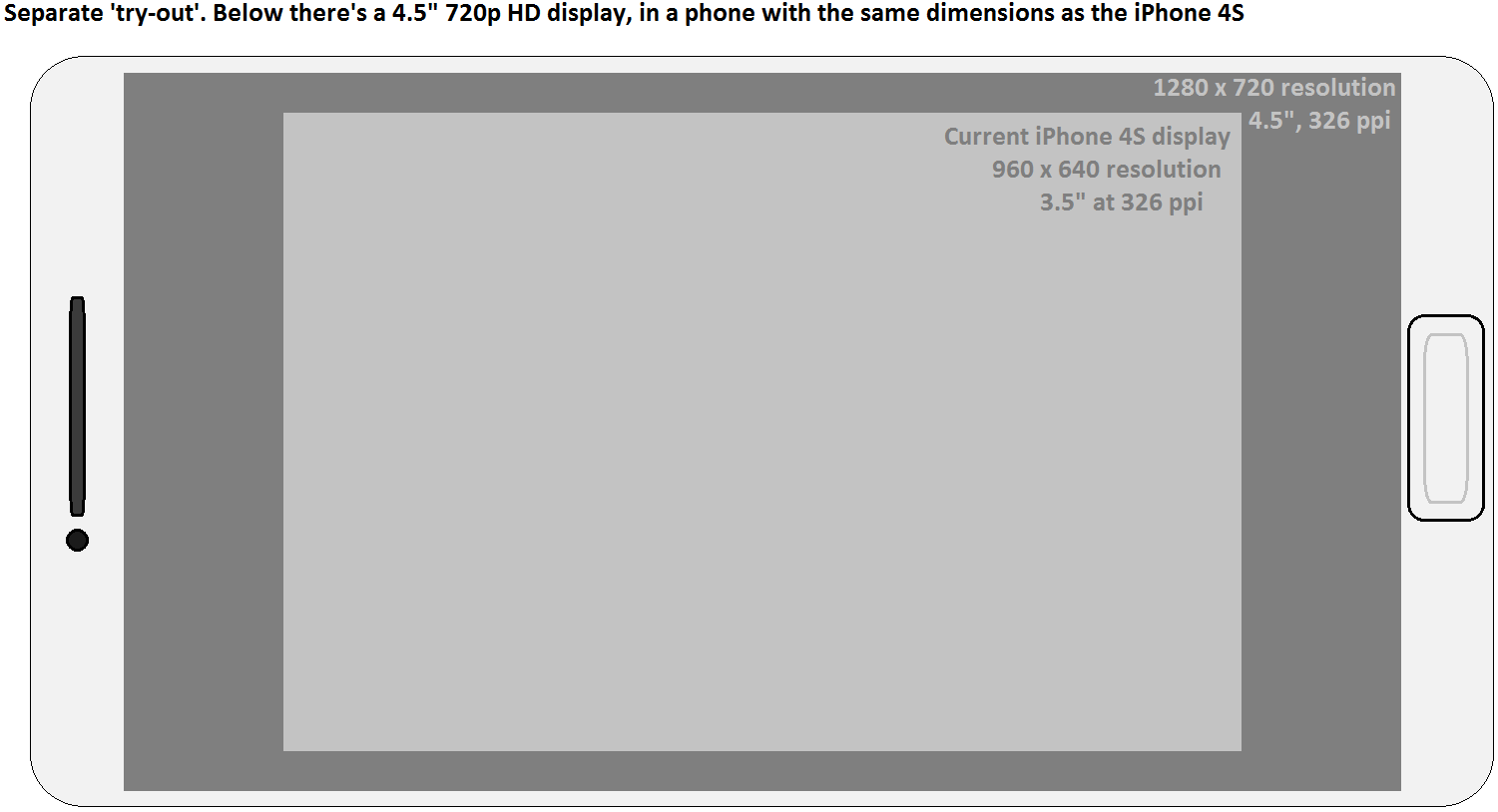 There have been plenty of opportunities to increase the screen size since 2007, and Apple has passed over each of them.

I doubt cost is even part of the equation.
C

I hate the phones with bigger screens. They're too large and I can't operate them with one hand. The market is there for people that crave the larger screens and they can enjoy the droids. I prefer the smaller one that fits into my front pocket that has better battery life.

I ended up switching to my Galaxy Nexus because I wasn't happy with the battery life on my 4S and I wanted a bigger screen with more resolution. At this point, it's more than obvious that Apple is the leader in mobile phones and after having a 'droid for a month I'll still give the overall nod to the iPhone. It seems reasonable that they would have more than one model of the iPhone at this point (beyond carrier and memory capacity) just as other phone manufactures give different options. I would certainly be pre-ordering the 5 if it bumped in both directions and went to a 1280x720 (or 800) resolution.

There is a market for larger screen phones. The GNex is quite confortable in my pocket and in my hand but I do have fairly big hands.... again, some size model variation would be a nice thing to see. Perhaps it goes against Apple's marketing model to have multiple models, but I do think there is a market out there for significantly larger screened iPhones (more than just a length bump). Anyway, wish in one hand.... right?
G

The Galaxy Nexus has a 4.65" screen, and it is in no way less comfortable to hold than any other phone. I've had the iPhone 4 with a 3.4" screen, the Nexus One with a 3.7" screen, the Inspire 4G with a 4.3" screen and the Galaxy Nexus with the aforementioned 4.65" screen. All of those phones are pretty comfortable to hold. Apple doesn't have to go out and make a giant Note sized phone, but it wouldn't be the end of the world for them to make a phone with a 4" screen or a 4.3" screen. And you guys would buy it anyway. If Apple were to make a phone with a larger, Retina quality screen, the whole forum would collectively crap their pants in excitement.
Last edited: Aug 25, 2012

how big do you want your phone to be? just to put a bigger battery in a bigger phone just to have a bigger screen. seriously??
T

thewitt said:
There have been plenty of opportunities to increase the screen size since 2007, and Apple has passed over each of them.

I doubt cost is even part of the equation.
Click to expand...

You doubt cost is part of the equation? Apple is all about maximizing profits. We're talking here about a company that settled with 256 MB of RAM for the first generation iPad because 512 MB of RAM would cost them $0.50 more.

I suspect their research indicates overwhelming support for the current screen size.
Click to expand...

There are probably multiple sweet spots in this regard. Also, people's opinions change as they come to grips with technology. I'd be willing to bet the more that somebody uses there smart phone, the larger the screen they wish for.
J

I like the size of my 4S. A little bigger would be ok. I'm fine with the rumored size of the next iPhone. Too large and I'd have to pass.

I used to own a Droid Pro and that, too, was a nice size. I believe it is a little bigger than the iPhone.

And, I agree apple could add a larger phone to their line up. I gotta believe they have looked at it. Maybe their research showed that adding a larger phone wouldn't bring in enough additional buyers to cover costs. You know, not simply just split the existing customer base between the two options.
You must log in or register to reply here.
Share:
Facebook Twitter Reddit Email Share Link
Register on MacRumors! This sidebar will go away, and you'll see fewer ads.
Sign Up
Top Bottom