Wifi issues with the 5 at home? Virtually GUARANTEED FIX...

All I can say is, no matter how I tweaked or set my Linksys N dual band router, my wifi performance at home with the 5 was poor, erratic speeds, limited range and obstacle penetration, my performance was only very good if I was really close to the router. Once the 5 had to pick up a signal through any walls, doors, or any distance from the router, things got very erratic and often slow, the wifi strength bars would constantly be bouncing from 1-3, mostly on 2, with reduced, fluctuating speeds. The 5 clearly had trouble getting and keeping a strong signal. The odd part was, my 4s was pretty much fine and was very steady and fast. It was really strange and annoying.

I took a chance and bought the highly regarded Asus router from best buy today.

INSTANT, 100% FIX, as if literally, the problem never existed, in fact, it's the best range and speed I've ever seen at home. Full bars regardless of where I am in the house. Rock steady max speeds, irrespective of distance from the router or obstacles. This router took my 5's really erratic and limited performance/speed/range, and made it the best I've experienced. I'm truly amazed at what the router upgrade did.

Yes, I agree the 5 is partly at fault, since my 4s was working just fine (though not quite as good as the 5 is now). But it seems to me, the 5 has an antenna design/software that has issues with less than cutting edge routers like my 2 year old linksys N dual band.

All I can say is, if you're frustrated by the wifi symptoms I described above, and don't mind upgrading your router to the Asus, I can all but guarantee this will solve your problem as if it never existed. I'm finally happy with my 5.

You shouldn't have to buy this router to get good wifi at home. All I'm saying is, if you're having these issues and want them solved, this will do it. It's up to you whether you want to spend the money to do it, or, try to exchange your phone, or hope for a software patch.
A

alent1234 said:
i'm personally waiting for an excuse to dump my linksys and get the Apple Airport
Click to expand...

I have the airport extreme base station (2 years old) and works great with iphone 5.
Comment

I use the AT&T Uverse router that came with my Uverse service. (Yeah, I know, I know...)

Never had a single problem with i5 and the WiFi.
Comment

Initially I thought I was having issues.. I reset my network settings and all has been good from there. I use my NetGear N900 dual band router and I haven't had any issues since.
Comment
B

jlake02 said:
I use the AT&T Uverse router that came with my Uverse service. (Yeah, I know, I know...)

Never had a single problem with i5 and the WiFi.
Click to expand...

I just subscribed to uVerse and had already packed up my Airport Extreme. Till the tech left and I discovered that the router was G-only and only had 10/100 ports Really? That's the best they could do? So I plugged in the Extreme to it, flipped it into Bridge mode, and now I'm rocking in-home N wireless and plugged gigabit connection. 10/100 is fine for the 18mbps speed that I'm subscribed to for the outside world
Comment
D

+1; another airport extreme user here. no issues to report!
Comment
A

iphone, macbook, ipad and airport all use broadcom wifi chips in them. if all your stuff is apple then there are broadcom specific wifi improvements that you will get
Comment

Sounds like any NEW router could do the trick as older routers were not meant to be used in homes with 10+ gadgets.

I live in a house with 4 other guys and combining our phones, PC's, game consoles, mp3 players, laptops, tablets, guests, other stuff, we probably have about 15+ things connected at any given time.

Our old router hiccuped once a day while our new one has been trouble free. Such is life with advancing technology.
Comment
M

Agreed, though my linksys N dual band wasn't more than a year or 2 old. I'm thinking the Asus is a near perfect match for the 5's antenna. That's one of its strengths people rave about, a super strong signal. It also seems to have an excellent and compatible interaction between the dual bands of the phone and its own dual band transmissions. It says it runs the 2.4 and 5 ghz bands "concurrently", whatever that means.

Whatever it's doing, it's a great match, and by most accounts, it's a top notch router.

Edited to add. I have a 3 year old laptop in another room I noticed hadn't been getting anywhere near the approx. 30 Mbps speeds my newer laptop closer to the router had been getting. Figured it was just because it was a few years old. I just checked it with the Asus connection, where before it would get about 20 Mbps, it's now consistently getting 30 Mbps.

So, great router all around, and a really good match for the ip5.
Comment

Likewise, we have experienced no issues or lag in performance.
Comment
A

Well I will wait for Apple to fix this issue with iOS 6.0.1. Customers should not pay to fix an issue..
Comment

+1 Works great with a whole houseful of ios devices: 4 macbook pros; 2 iPads; apple tv and 3 iphones. Hums along with nary a hitch!! Well worth it.
Comment
J

The Asus RT-N66U and the Asus RT-N56U are both brilliant routers, have them working flawlessly with my iPhone 5 and getting speed tests results of like 80mb which is amazing as my iPhone 4 would not manage over 18meg!
Comment

Airport express at home AND at work and have the issue at both locations.
Comment

Im running a gen 5 extreme and the newest gen express, Im getting a good strong 5 bars in most of the house, the best thing was extending the range with the express, Im very happy, also out in the backyard, the signals very good, iPad, iPhone, windows laptop, do great.
Comment
D

ktmelvis said:
Im running a gen 5 extreme and the newest gen express, Im getting a good strong 5 bars in most of the house, the best thing was extending the range with the express, Im very happy, also out in the backyard, the signals very good, iPad, iPhone, windows laptop, do great.
Click to expand...

I use the wireless router that came with my fios, which is suppose to max out at 15 Mbps. I usually get that, but about 20% of the time I get some ridiculously low speed like 0.60 Mbps. I didn't used to be like this with my 4S, which I never upgraded to iOS 6. So I blame either iOS 6 or my iPhone 5.
Comment
D

chazcron said:
Airport express at home AND at work and have the issue at both locations.
Click to expand...

You probably have tried this, but have your iphone 5 forget network. Next power off modem and airport. Wait a few minutes. Power up modem, power up airport. When fully operational, reconnect iphone 5 to network.
Comment

The strange thing is the speed test results I'm getting with my iPhone 5. The device continually shows a full WiFi signal strength on the indicator. If I cup my hand over the top of the device I can get it to drop a notch, but I can do the same with the 3GS (easy fix for that, don't cup my hand over top of device). What I can't figure out is my inconsistent speed test results with the iP5. I didn't even know I was having an issue until yesterday when Safari YouTube videos started to freeze (although today I watched a 42 minute TV show on the ABC app with no issues). Some of my speed test results have been on par with the iMac and iPad, but most of them are dismal. Tests don't seem to matter if they are close to the router or not. 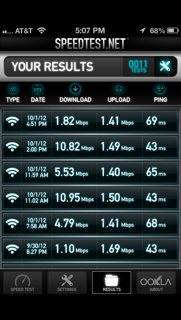 Random question, but what is the difference between the express and extreme?
Comment

jlake02 said:
I use the AT&T Uverse router that came with my Uverse service. (Yeah, I know, I know...)

Never had a single problem with i5 and the WiFi.
Click to expand...