Would you pay $3000+ for a "Premium Range" MacBook Air with the following specs?

The MBA is becoming increasingly mainstream. It used to be a more expensive, niche product, labelled a "premium ultraportable" and it carried a premium price tag, eg $3000+ for top spec in 2008.

I like that more and more are enjoying and we are seeing the fruition of Jobs' vision of the "future of notebooks". Another part of me really wants something more special with the MBA.

Look at this reaction - There's something in the Air. Stunning and way ahead of its time.

I am glad you don't work for apple.
Comment
P

No, while those specs would be awesome ... then Apple would be becoming like Sony. I'm fine with what they are doing now.
Comment

Sounds crazy doesn't it, however the original MBA was $3100 for the top spec iirc!
Comment

I should have really added that this wouldn't replace the current range, merely add to it
Comment

You want all those features in the same 11" enclosure/form factor and expect more battery??

Sure we can all want the impossible, but it makes your poll utterly meaningless because what you want is just not possible not because of cost but hardware.
Comment

MacRumorUser said:
You want all those features in the same 11" enclosure/form factor and expect more battery??

Sure we can all want the impossible, but it makes your poll utterly meaningless because what you want is just not possible not because of cost but hardware.
Click to expand...

True it's hypothetical, but we're not on the moon here. I imagine a lot of what I listed is already achievable. If you don't think so, then imagine it's the 13" then
Comment
M

I would just buy the current MBA and use the rest of money in building windows based gaming desktop.
Comment
S

PDFierro said:
No, while those specs would be awesome ... then Apple would be becoming like Sony. I'm fine with what they are doing now.
Click to expand...

No. Here's the problem I have with your list: I don't want all that.

I want parts of it.

I'd be pleased as punch with the Air if it had 8 GB of RAM. More than pleased with a mild boost to the graphics capabilities. But I don't need an SSD that big, or 4G/LTE connectivity, or a ultra-sharp resolution display.
Comment

MacRumorUser said:
You want all those features in the same 11" enclosure/form factor and expect more battery??

Sure we can all want the impossible, but it makes your poll utterly meaningless because what you want is just not possible not because of cost but hardware.
Click to expand...

Moreover, regardless of any current absolute limitation it wouldn't have been utterly meaningless anyway as I only posted the specs, as stated, as an example: I'm interested in a fair gauge as to the numbers of people here who would actually fork out the cost for a more premium spec.
Comment
P

I would be willing to pay that price, but those are not the features that would get me there. Actually, by the time I bought the TB Display, I'd be pretty close to 3,000 anyway. I'll probably be doing just that next year (I've been on the Ivy Bridge band wagon for a while now).

I think we have already traded the space that would have been available for a discreet GPU for that big freakin' TB chip. I believe that TB is a better feature anyway.

a larger SSD always sounds like a nice to have, but would I pay significantly more to go from 256 -> 512 GB? No, I believe in the cloud and in NAS. 256GB is plenty of local storage (for me).

8GB would be nice.

I think that the current resolutions are 'right sized' for the 11.6 and 13 inch displays. I don't think I want the pixels to shrink much more.

TB makes USB 3 irrelevant. eventually someone will make a port extender that includes USB 3, FW800 and eSATA that all connects to the TB port. Maybe it will even have a monitor built into it, but more than likely not - HDMI or Display port connectors would be more likely.

3G/LTE - well I wouldn't complain if this were included, but I wouldn't pay extra to get it. In the rare case that I have no WiFI available but I do have room to work on a laptop, tethering is acceptable to me. Plus, yet another cellular plan, really?

Cooler is better - I'd pay for for something like laser cooling, but that's the only thing I've ever heard of that would have any hope of being small enough to fit inside the Air. Pretty sure that's not happening any time soon...

Agreed with much of your post Panch0. Tbh it's probably a good thing we're not seeing 3G/LTE given the problems we're seeing in eeking more battery in the Airs. Higher res is also a bit overkill, perhaps then just improved displays.

Interesting seeing how many people would pay for a higher end MBA, more than I anticipated!
Comment
B

If I could put OSX on the new Sony Z, I would have been preordered with the 1080p screen already.
Comment
K

I think you are missing the point of the original MacBook Air. It wasn't just a $3000 computer for the sake of being a $3000 computer. It was another case of Steve Jobs being a few years ahead of everyone else. Though ultraportables had been tried before, the MacBook Air Rev A was the sleekest design to date, and was one of the first to offer SSD storage of any kind (albeit optional). It was the "next big thing," but it wasn't quite ready for prime time, and Jobs realized it. It was sort of like the original iPod in 2001. It was released to a lot of fanfare but an initial slow reaction (it was Mac-only at that time).

I'm guessing Jobs knew at that point that ultraportables were the way of the future, and he released it as a niche product to tweak the format until he got it right. The Rev B later that year was noticeably cheaper(I got one with a 128GB SSD and NVIDIA 9400m for "only" $2400), much improved, and was the start of the mainstreaming process, which was largely finished with last year's Rev D, and was completed with today's launch of the Rev E. While it took only 18 months to make iPod mainstream, it took over 3 years to do the same with the MacBook Air.

Until some at Apple identifies the "next big thing" in portable computing, it doesn't make sense to release such an expensive toy. Apple makes premium products, rather than luxury products. There's an important distinction between the two.
Comment
D

Ijustfarted said:
$3000 for any laptop is ridiculous.
Click to expand...

Maven1975 said:
If I could put OSX on the new Sony Z, I would have been preordered with the 1080p screen already.
Click to expand...

http://www.hackintosh.com/. Although that's quite a big chance it doesn't work with the Z.
Comment

I just wish Apple would include a handle, like they did on the Mac Portable: 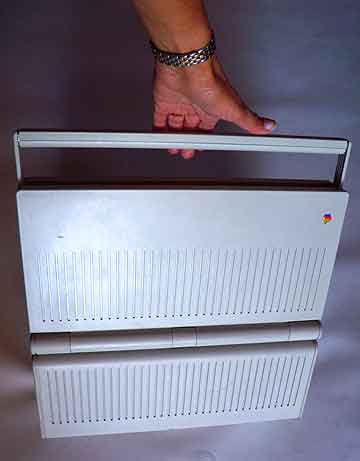 Ijustfarted said:
$3000 for any laptop is ridiculous.
Click to expand...

... unless you're a PRO that NEEDS crazy specs.

... also, why would you disable the GPU as opposed to using GPU switching? because you want 2 hours of battery life? oh, okay.
Comment
I