Crazy idea. 32gb ram modules in a cMP. Anyone tried this?

Believe Sandy Bridge was first to offer support for HCDIMM.

I was saw on Japanese blog able to successfully unsupported DIMMS configuration with Clover memory mapping.

I wonder if HCDIMM will be seen at all by the MP5,1 .. or even any Mac with Sandy Bridge. There's not much documentation about this.

I was saw on Japanese blog able to successfully unsupported DIMMS configuration with Clover memory mapping.
Click to expand...

Clover? And have you seen this? 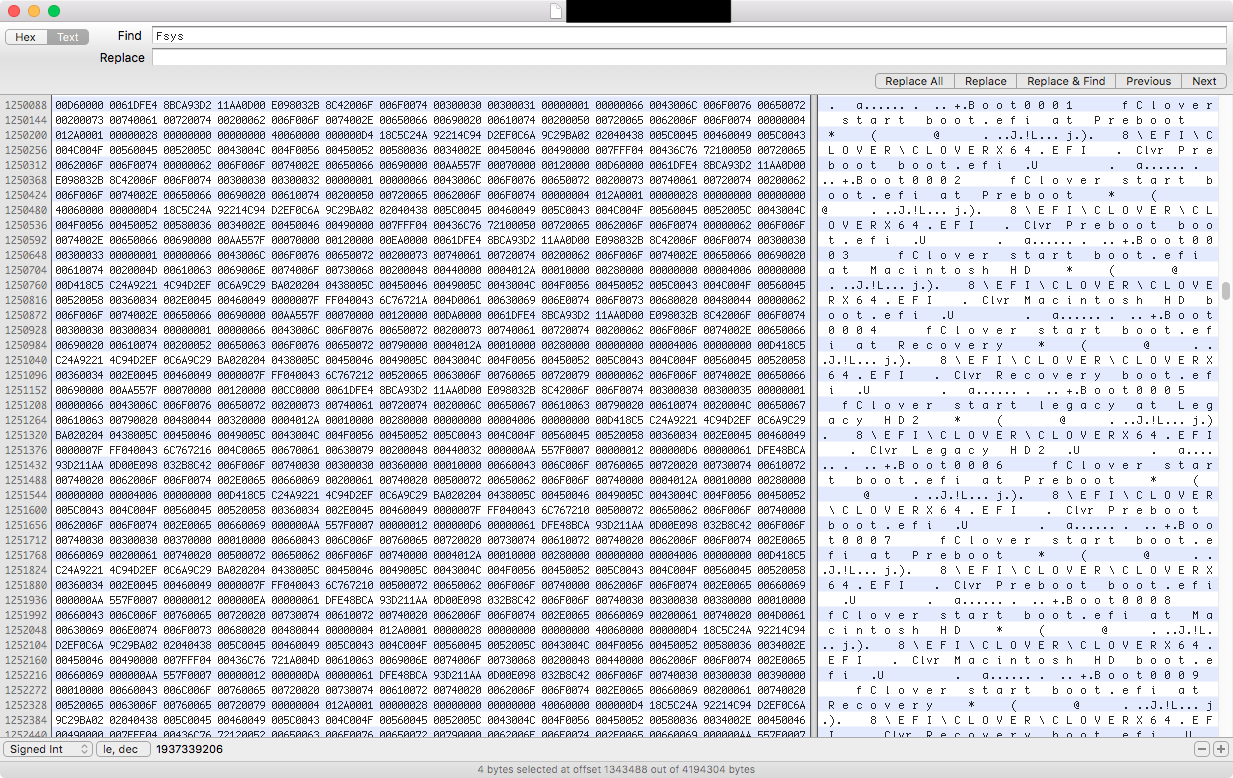 OpenCore on the Mac Pro

Fastest and dumbest way to brick a Mac Pro, be smart and never do it:

Anyone ever try the uncommon 24GB capacity RDIMMs on a cMP? These are triple rank modules - like Samsung part # M393B3G70DV0-YH9Q2.

I've not seen any mention of them in tested with this generation of Xeon.
Reactions: VaZ and LightBulbFun

Westmere as well. Anyone confirm these work?

LightBulbFun said:
im still waiting for someone to try a 64GB LR-DIMM or 8, for the LOLs
Click to expand...

8Rx4 sticks now that's a whole different ballpark!
Anyone have any of these to test out?

Sadly these triple rank sticks do not work in MP5,1 in any combination i tried.
Mixing with regular dual rank sticks will make the Mac boot but it'll show empty slots and a red light on the memory tray.
Reactions: Agfa, 1madman1, LightBulbFun and 2 others
K

this is really breaking my brain. I have worked in data centers for over 10 years and I have never seen or even heard of triple-rank memory before. This has got to be some obscure thing for some specific HP hardware. I cant find any listings of this RAM that arent related to HP machines. Even searching HP documentation comes up with basically nothing.

(edit) Found it. These are memory chips intended for HP 8th generation E5-4x00 blade servers and part of HP's "Smart Memory" line, whatever that means.

Using OpenCore & OpenCore Configurator I've been able to (so far) get to 192 GB : 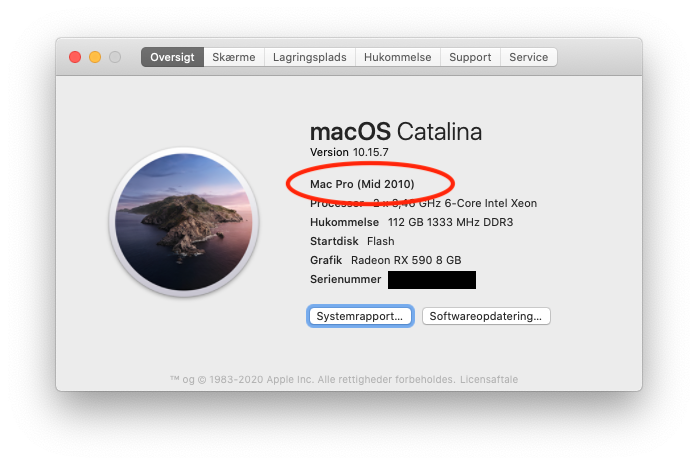 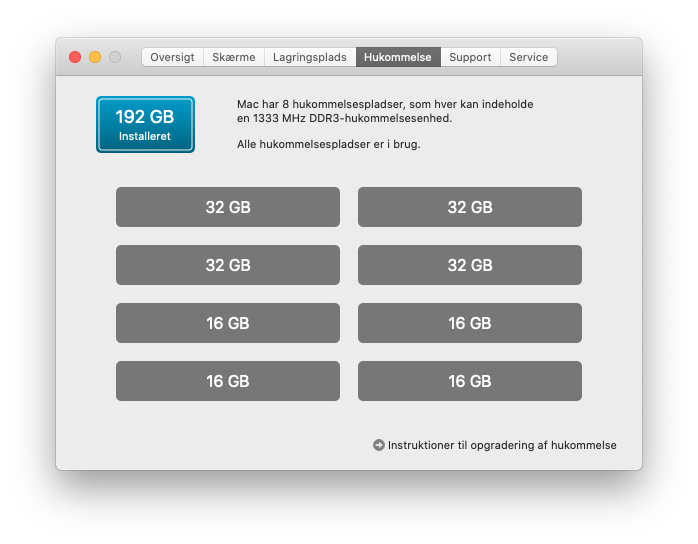 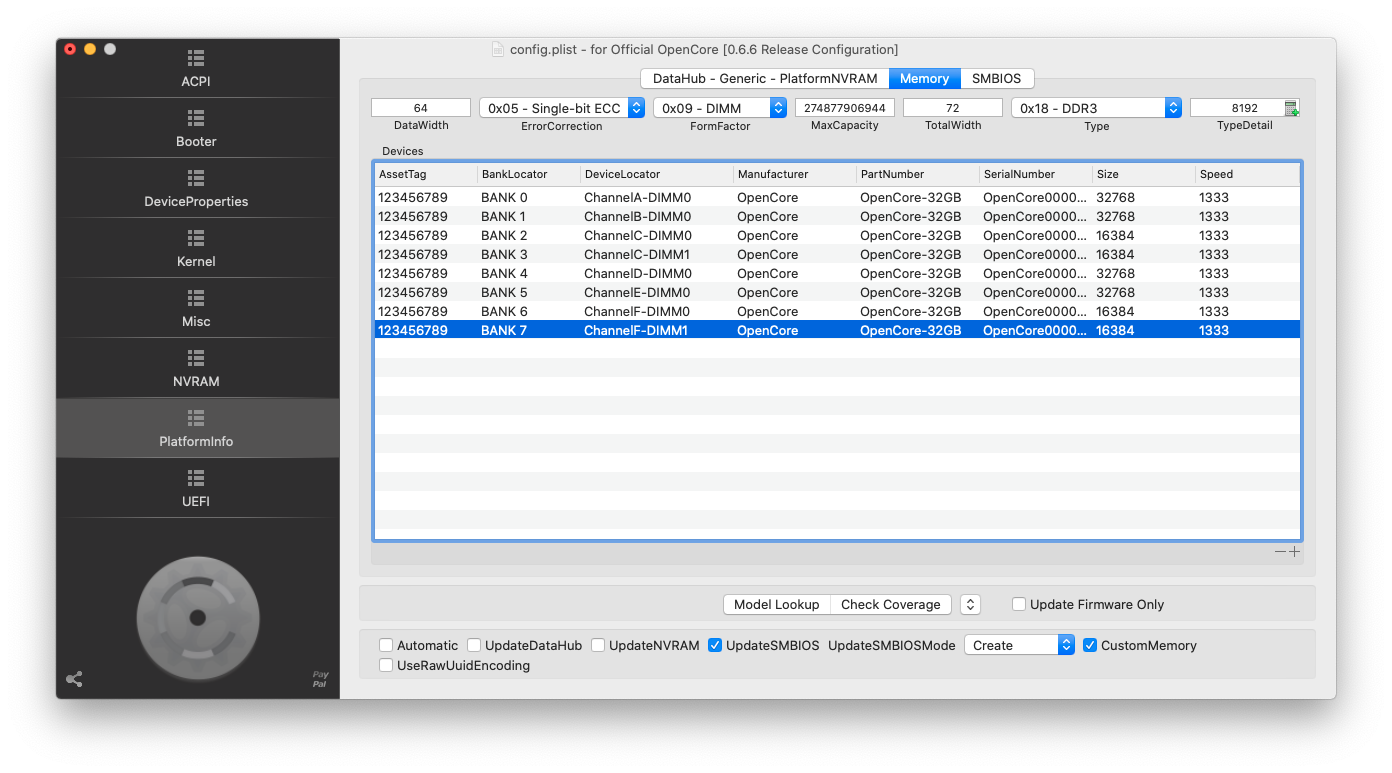 The "trick" is specifying !exactly! what you have in your memory slots
Reactions: LightBulbFun

And what about without??
What model are those 32GB sticks?

memory.net
They've got 3 (three) models :
that according their support : All DRAM OEMs go through revisions in components used as time passes. They designate with slightly different part numbers. The specs are the same . 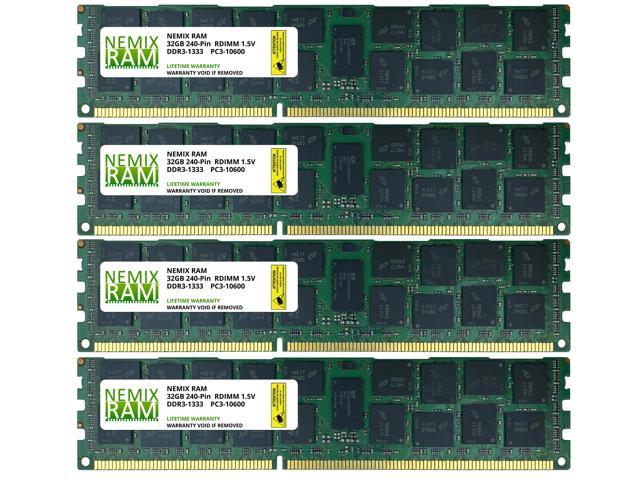 www.newegg.com
but they refused to sell to me due to my country and their current covid-19 shipping policies.

I've got some issues : I've got two red lights on 2 x 16 GB modules, so presently it seems as if these actually aren't seen. I'll do some more indepth experimentation. Currently I've got
in my posession, so I can mix and match rather freely. Until now, I've used dosdude1s patch with pleasure, and using those, I've been able to use 2 x ( 3 x 16 GB + 1 x 8 GB ) unregistered for a total of 112 GB without any issues.

What seems to happen is, that when you explicitly specify your RAM-configuration, macOS accept this as the gospel, !BUT! puts the RAM it actually can't see / isn't present into the wired memory category 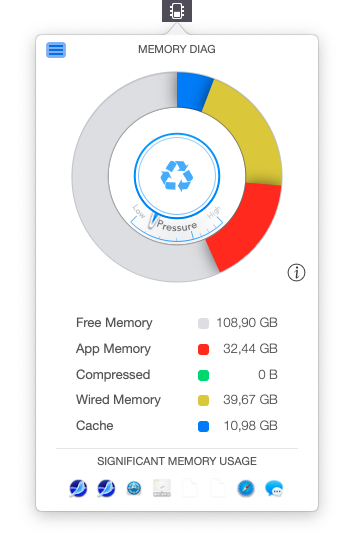 So, I've revised my setup:
I'm now getting this : 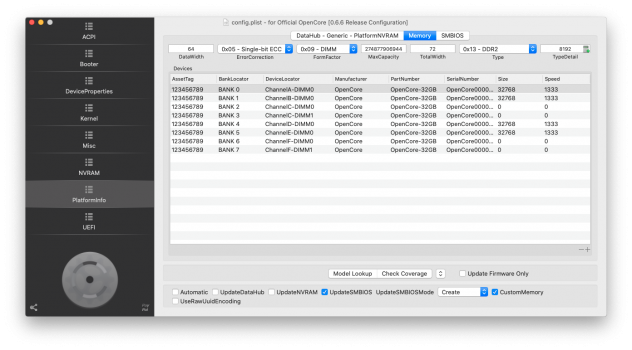 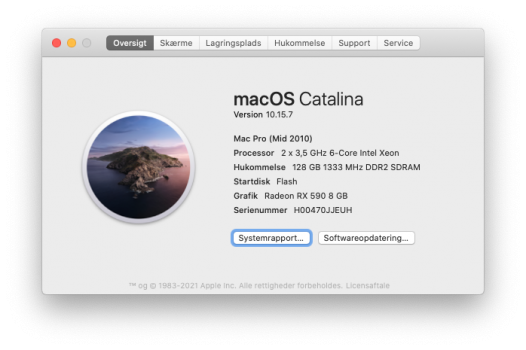 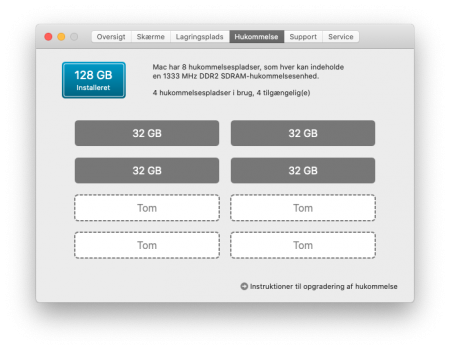 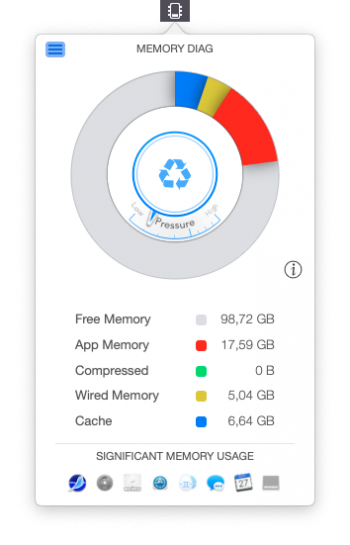 Now, it's time to use this memory to the fullest to see if it actually works, so I'll open some memory intensive VirtualBox VMs
(and: yes - I've doubled the RAM I'ld normally assign to most of them) which gives me : 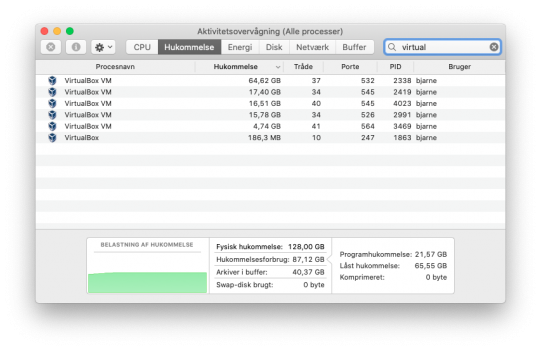 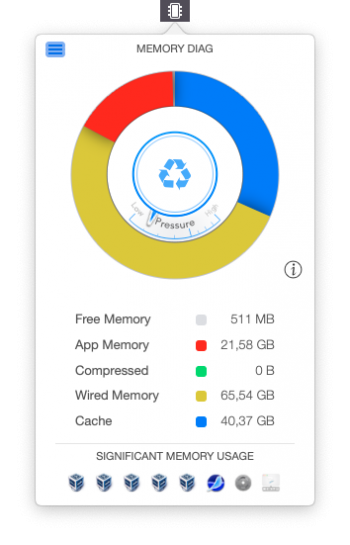 VaZ said:
8Rx4 sticks now that's a whole different ballpark!
Anyone have any of these to test out?
View attachment 919911
Click to expand... 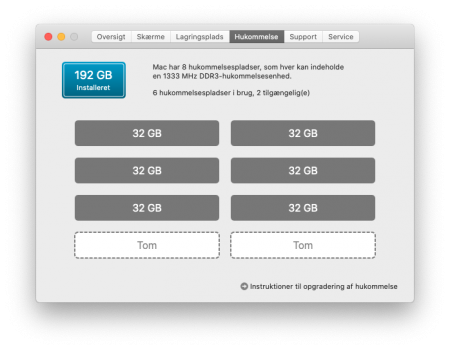 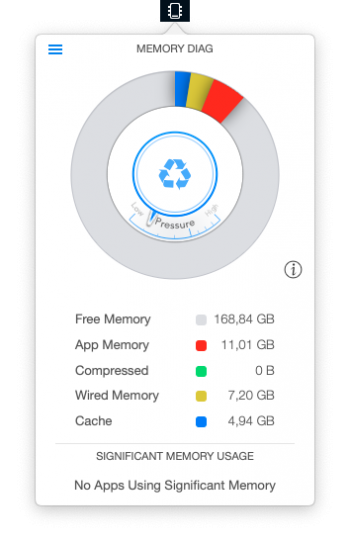 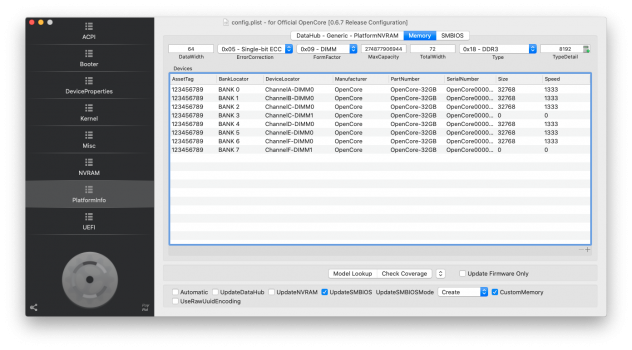 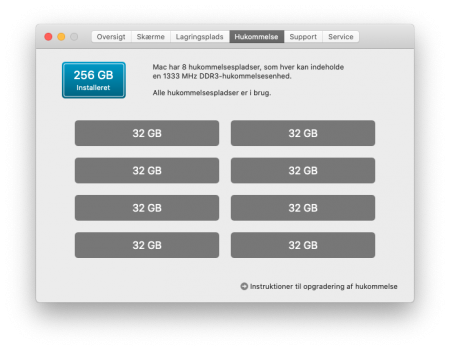 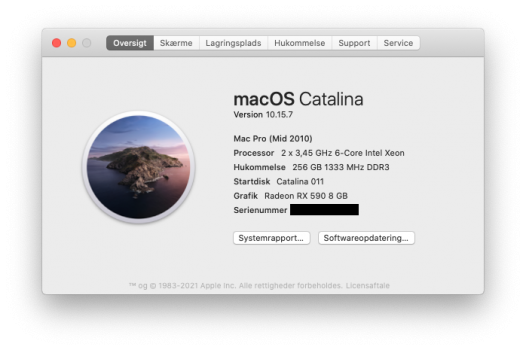 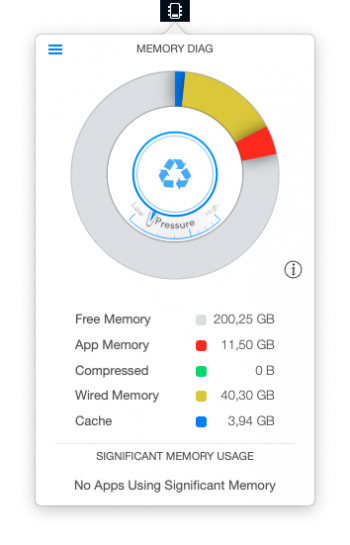 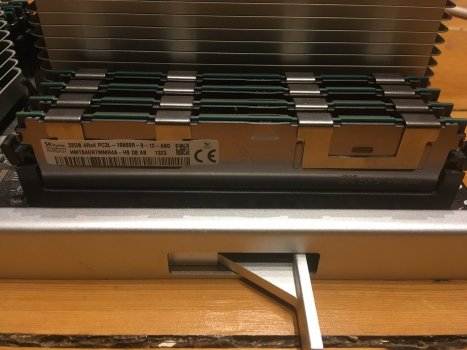 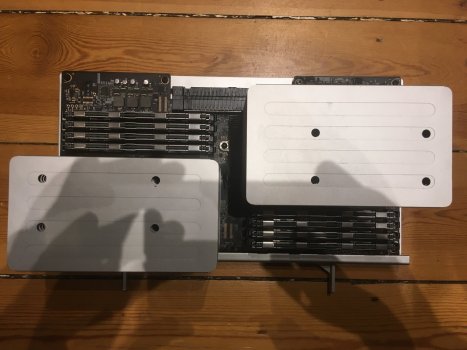 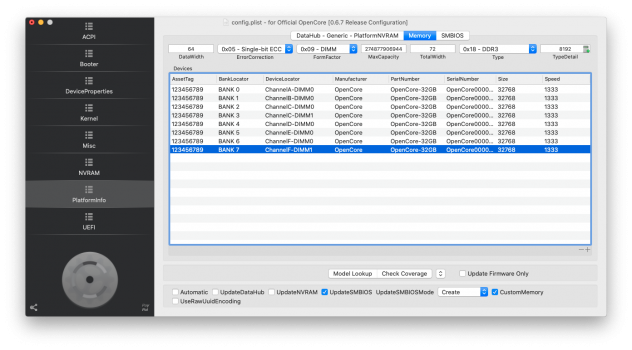 Nice and what happens if you boot into a drive with no opencore?

no opencore : the computer simply hangs and won't boot past the startup sound.

macOS on a cMP is only able to natively handle up to 16 GB RAM modules registered/un-registered.

OK, I am thoroughly confused now! I was under the impression that the limit on the kind of ram was known and the problem solved: 32gb ram from the trashcan Mac Pro was good to go as long as one used only 5 slots. The limit of what could be addressed was left behind sometime ago with the move towards using Metal to draw the GUI. In that regard, 160 was made a limit by the 5 slot thing but the 5690 could handle nearly a terabyte of ram otherwise. In none of the things I have read has the motherboard been implicated as a limit of any sort. Natively, OS X can handle 128gb from the end of the "Big Awesome Cats" onward and that Mountain Lion and prior could only "see" (which is to say that the machine would boot but not be able to use all the installed ram) ~90gb?

(AFAIK) I can install Catalina just as I did Mojave with the sole exception of preventing the installer from checking the model identification. However, to go beyond today, I would have to install Open Core but --particularly in this thread-- not everyone is as enthused about the whole thing and particularly, what has to be done to get 256gb of ram working and how easy it would be to brick the machine one is working on?

The 32gb sticks have the same latency as the 16gb and 8gb sticks but they are notably faster than 1333mhz but will not go that fast because the 5690's top speed for ram is 1333? I was waiting to do two of the 32s because that would instantly double my ram but I can get 3 or 4 of the 16s for more of less the same price with the same speed; the issue is that both are registered ram and it wasn't that long ago that 8gb sticks were registered ram as well so that by waiting I could at least get 16s that were not registered?

Once the security updates stop, I plan on going to OpenBSD full-time and use a virtual machine for the times when only a Mac will do --since it is a Mac, there shouldn't be a problem, right? However, if I could use the 32gb sticks without Open Core there then I would migrate sooner to get the 256gb??

One last thing, in all of this thread, no one has said, as near as I can tell, anything about temperature regarding the more densely packaged ram under workload; has anyone had any issues with shutdowns due to heat?
Reactions: zedex

When I got the first set of 4 x 32 GB sticks, I tested the motherboard issue by booting from an Ubuntu USB stick. Ubuntu was able to see the sticks without any issues.

Serve the Home has an excellent article on the differences and consequences : https://www.servethehome.com/unbuffered-registered-ecc-memory-difference-ecc-udimms-rdimms/

You don't "brick" you cMP by installing 32 GB sticks and trying to boot macOS - macOS seems to
I do think / assume that the 16 GB macOS limit might be due to the difference between unbuffered and registered RAM, where with 16 GB sticks both types works with the CPU , but for 32 GB and up only RDIMMs work, so  has played it safe. 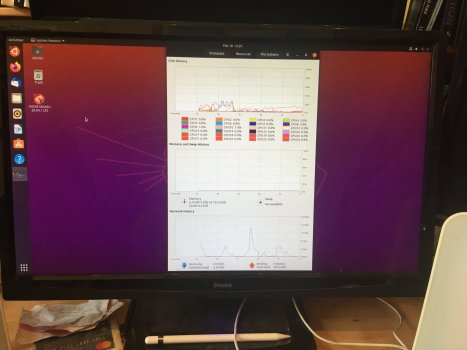 Bjarne, thanks for the quick reply In a way, I am more twisted around though: I was under the impression that registered ram could not be mixed; that it would have to be all 16gb or all 32gb regardless of OS? From what you are saying, OpenBSD could be inferred to work with the 256gb but that could also be said to mean that FreeBSD would as well and isn't that basically Darwin? Now, I wasn't saying that the ram would brick the cMP, I was under the impression that it would boot with 5 sticks but not 6 of the 32. The bricking I was referring to is one that has been mentioned in this and other threads regarding OpenCore (you seem to be having ZERO problems) and that errors in configuring the ram would cause --I think it was even you that said that part-- real problems. I am glad that there is no issue with temperature (absolutely have to replace the plastic screws holding the Northbridge and its cooler together) although someone living in Scotland saying that would have less credibility than someone living in Dubai

Correct - you can't mix unbuffered and registered RAM - that was one of my issues in my initial tests; for reference see the "Serve The Home" article.

I think it's safe to assume that you'll have no problems booting into 256 GB with any flavour of either Linux -or- BSD : the RAM limit seems to be an artificial limit set by  on the cMP specifically as demonstrated by the fact that
under Catalina; so it's not an explicit macOS limit in itself.

My issues with not being able to boot has been due only to misconfiguration of OpenCore.

Darwin is based upon FreeBSD - that's why  has to release the basic Darwin kernel as open source.

The newMP is an entirely different kind of animal because of the mods Apple must have made to plug in that "better than PCIe" interface so a grain of salt is needed there.
So, no boot with the 32gb in OS X without OpenCore?

RAMtheSSD said:
So, no boot with the 32gb in OS X without OpenCore?
Click to expand...

Correct - the cMP simply totally hangs at the boot/efi stage.
The same happens if you've misconfigured the RAM configuration for OpenCore.

Problem with OpenCore & Metal GPUs is if something goes seriously wrong,
you have to :