Netflix is testing a new feature in its mobile apps for iOS and Android, which aggregates trailers and photos for its various shows and movies in a feed that looks very similar to Instagram. A Netflix spokesperson confirmed the test in an email seen by Variety. 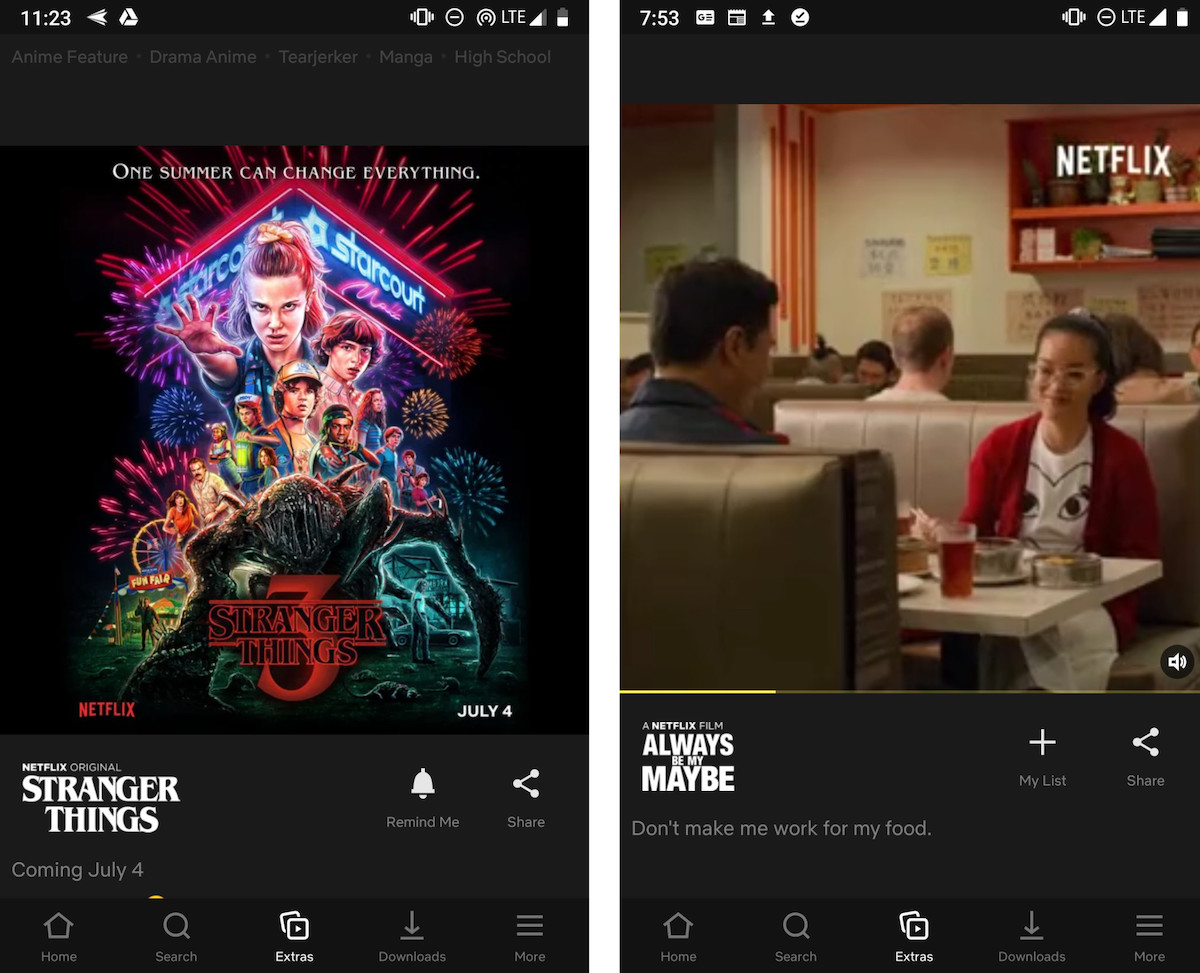 Image by Janko Roettgers via Variety​

For the users in the test, they will see a new tab on the mobile Netflix app called "Extras." In this tab, users can scroll vertically to see new posts about Netflix originals like Stranger Things, Chambers, and See You Yesterday. Videos in the feed play automatically (without sound), and image galleries can be scrolled horizontally, just like on Instagram.

Posts in the Extras feed include options to share the content with friends, add the film or TV show to your Netflix list, and even remind you when the content launches if it's not out yet. Netflix said that this is all a way to "help fans connect more deeply with the titles they love."

Netflix has been inspired by other social media platforms in the past, last year updating its mobile apps with Stories-like "preview" bubbles that users can tap through to watch vertical trailers of Netflix originals. You can even post directly to Instagram Stories from Netflix thanks to a new integration that launched earlier this year.

But, like with any test, Netflix warned that the new Extras tab may not launch to everyone and could be scrapped.

Netflix: letting your paying customers disable auto-play of previews would be a huge extra.
Reactions: tonyr6, jhfenton, idmean and 2 others

Netflix app is slowly becoming that what iTunes is. That is so wrong
Reactions: gemoritzt and CE3

Completely unnecessary. Why does every app now wants to incorporate these idiotic features? People just want to watch shows... I am already mad that many of my favorite movies and shows have been removed, if they pull more moves like this I am out of the platform.

They should think more about everything now that competition has stiffen.
Reactions: tonyr6

FloatingBones said:
Netflix: letting your paying customers disable auto-play of previews would be a huge extra.
Click to expand...

They don't listen! I'm think a million people need to cancel on a specific day then re-subscript a week latter.
Reactions: tonyr6

Netflix added the feature before AAPL announced iOS 13 support for BackgroundTasks at this week's WWDC.

BackgroundTasks will enable Netflix to download updated content to a User's iPhone OR iPad on a daily basis, & will, IMO, enable them to take their new feature to another level.

Here, think High Quality content that should be downloaded ONLY via WiFi, & will very-likely be viewed Offline.

I predict a burst of Downloads in the future around the world @ 5am, using BackgroundTasks.

Netflix, HBO, Disney+, & ALL others with similar apps & services, will ALL very likely take advantage of this new iOS capability, starting in Sept.

It is, IMO, one of the single best changes to iOS this year.