The 12" PowerBook battery is a pack made using 6 Lithium ion cells with the 16850 form factor. The 6 cells are arranged in 3 pairs (each pair in parallel), so using 2100mAh cells yields a pack with 4200mAh capacity and about 12v. Typical Li-ion batteries are charged to 4.2v and should not be discharged below 2.8v. There is circuitry in the battery pack that monitors each battery pair and makes sure these voltage limits are met when charging and discharging the pack.

The battery status can be seen using the System Profiler, under the Power tab. The capacity, current draw/charge, and pack voltage are reported there. Each pack keeps track of its capacity as it's used and I've seen new OEM packs start with 4400mAh and 4600mAh capacities. This number is used to calculate the percent remaining, or time remaining, as the pack monitors the energy extracted. If the pack has not been fully discharged in a long time, the Full Charge number may be overly optimistic, and the computer may shut down with battery capacity still showing. The pack can be calibrated by running the computer on the battery until it shuts down; the pack will update the "Full Charge Capacity" with the amount of energy extracted in the process.

The capacity will also depend somewhat on how the pack is used. With the processor at half speed, the display backlight off, wireless off, playing music I get an indicated current draw of 0.7 amps. Playing a video I can get up to 1.8A and with everything maxxed I can get over 3. At a higher current draw the internal resistance of the battery drops the output voltage more. Li-ion batteries have pretty similar amp-hour capacities at higher currents, but when the output voltage is lower the computer will draw more current to get the same power.

Because of the cell arrangement and protection circuitry, the pack will shut down if any pair of cells gets down to 2.8v. This means that a single bad cell will cut the useable capacity of the whole pack more than half, and the cell paired with the bad cell will be working harder because it gets cycled deeper and at higher current. One indication of this condition is the pack voltage when the computer shuts down. If all 3 pairs are matched in capacity, their voltages should be similar when they're nearly dead. For example, three nearly dead but matched pairs: 3v + 3v + 3v would give a 9v pack. If two pairs are still going strong while one has already reached the cutoff voltage you'll see a higher pack voltage, like: 3.8v + 3.8v + 2.9v = 10.5v. So a "bad" pack that shuts down at a higher voltage, may have a single bad cell.

I have a few OEM battery packs that are showing their age. Only one of them reports over 4000mAh capacity. I've not had much luck with the aftermarket packs either. They're typically cheaper construction (all plastic instead of aluminum), but mostly they're no better than the OEM packs in use. Two packs I bought were advertised with a 5200mAh capacity, but were actually less than 3000 (less than a 15 year old OEM pack). After returning them, I decided to try my hand at putting new cells in the old OEM packs. My plan was to open up two packs in poor condition, possibly piece together a decent pack with the cells from both, and install new cells in the other.

When it comes to 18650 lithium cells, there are only a few actual manufacturers of good cells, and a lot of re-wrapped cells and a lot of lying. The current state of the art for these cells is 3400mAh in the low power spec. There are some cells in this form factor that are made to deliver high current, but these have less capacity and laptops do not need high current. So, anyone advertising a 16850 cell with significantly more than 3400mAh is simply lying. For example, here is a magic "9800mAh" cell:

So basically, if you want to re-cell a pack, mind where you get the cells. Most of the latest and greatest cells go straight to car and portable manufacturers, so individual cells are less available and somewhat pricey. However there are good cells available that are recent manufacture and affordable because they're last year's model. Another good source for cells is to open up packs. Laptops go obsolete very quickly (except for PowerBooks), so you can often find cheap OEM laptop packs that will have relatively new, good quality cells.

I went with Sanyo NCR18650BF cells, rated at 3300mAh at around $5 each.
Reactions: LightBulbFun

I opened up two OEM batteries. There doesn't seem to be any special method; the plastic cover is glued on, so I just broke the glue seam as carefully as possible: 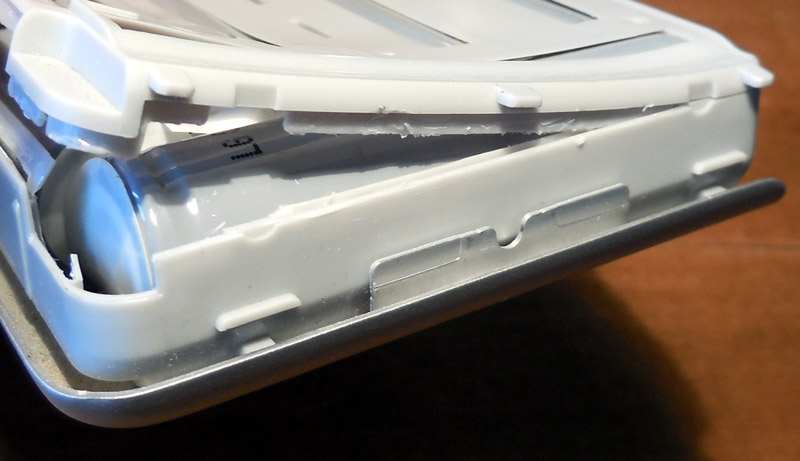 The two packs use different cells, different wiring arrangements, different electronics, plastic molding, etc. Unfortunately all of the cells were pretty mediocre. Some were better than others, but none really worth putting back into a pack. They all had pretty high internal resistance.

For reference, here what System profiler said about these two packs:


Code:
I installed the new cells in one of the packs, charged it, and have been running off it for the past several hours. I'll update with the results...
Last edited: Oct 26, 2015
Reactions: LightBulbFun

The first charge/discharge cycle is complete. The new pack ran for 5.5 hours, compared with about 40 min with the old cells. One problem is the calibration didn't seem to work. The Full Charge Capacity increased, but not tremendously. I don't know if the new capacity confused the firmware, or if the firmware limits how much it will change the capacity for each cycle, or...??

Some thoughts on how to do this: You'll need a soldering iron. You can get cells with tabs welded on. This is better than soldering straight to the cell because there's less risk of damaging the internals of the cell with too much heat. If you disassemble another pack to get the cells you need, they'll probably have tabs you can reuse. I got bare unprotected cells and soldered straight to them (because they were cheaper). I tried to solder quickly to avoid overheating the case. When soldering across the top of the cell, it's wise to put some high temperature insulator under the conductor because the wrapper on the cells is thin and melts easily. This could lead to a short between the top and case. Note the strategic use of tape in the OEM packs. Here is a picture of what I mean: 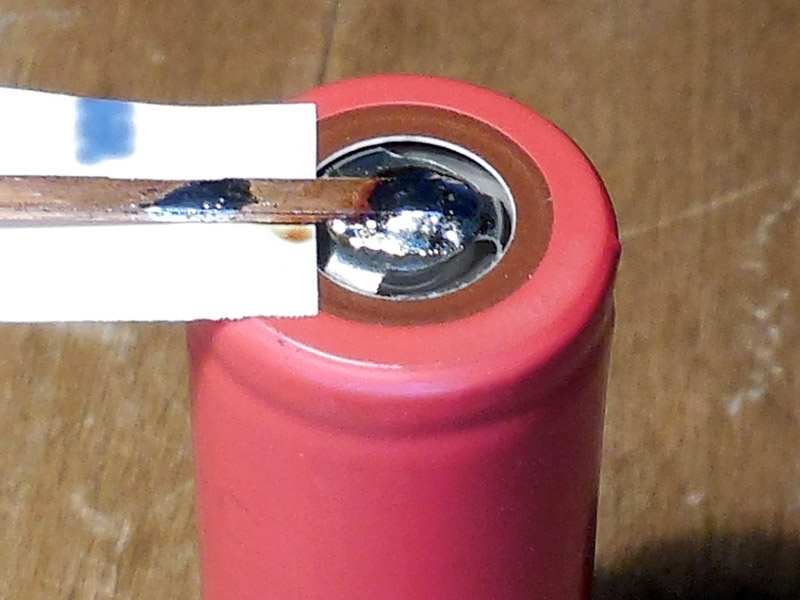 Otherwise it's pretty straight forward; just replace each cell or cell pair, keeping track of orientation and wiring. I don't know what happens if you connect cells backwards, but it could be pretty interesting. Good, charged Li-ion cells have a lot of energy.

very cool heh I may do this with my iBook G4 battery if it ever gets too flat I just need a good soldering iron (I doubt my 1960/70s fixed temp 15W soldering iron will cut it LOL) regarding the calibration I recommend running it at least a couple of times. also 5.5H thats impressive for a PowerBook G4 heh esp a 12 inch one ( i wonder if the apple service diagnostic disk has a battery calibrator in it)
X

Nice post. A few years ago my Powerbook G4's battery conked out randomly after showing some warning signs it was dying for some months and I came across an article about refreshing the cells with new ones. That article is probably still out there but one thing he did was replace the batteries with alternative types instead of Li-Ion (I forget what, think it might have been the magnesium type), purely for safety reasons (think he didn't fancy doing some spot welding or soldering of the contacts onto Lithium batteries in case he compromised the cell casing and blew his hand off, or gassed himself).

I did open my battery up in the end since it was fecked and useless, but I didn't get around to changing the batteries and as such didn't do much research on new cells, but if it's a problem finding actual lithium cells that aren't cheap Chinese crap, maybe using something other than lithium cells is a good idea. I dunno, of course you won't be able to get cells that provide the same sort of mAh as Lithium, but if your battery is utterly dead like mine was or doesn't hold much charge it's better than nothing I guess and it would be safer to use with soldering the tabs on to a certain degree.

As for your full charge capacity reading issue, that may be to do with the board in the battery needing to be reset, it still thinks it's got the old cells in it afterall. No idea how you'd do that though beyond using specialised IC programming gear to read the chip on the pcb (then again I've seen more obscure things for sale on eBay). Then again like LightBulbFun says it might just need a few full recharge cycles to occur before it "realises" the cells are providing more capacity than it says and adjusts accordingly.
Reactions: LightBulbFun

Very good writeup. My 12" PowerBook has at least one bad cell in it that'll put the computer to sleep under any sort of heavy load. Idle or under minimal CPU load, it can last nearly 2 hours, but it may be showing a 100% charge, but die instantly if I try and do anything that ramps up the CPU. This may be an upcoming project of mine, as I've never liked aftermarket batteries either.

I figured out what the calibration is doing. Every time I cycle the battery it increases the Full Charge Capacity by 500mAh, so I guess it has that adjustment limit built into the logic. Now I'm wondering if it will go above the factory new capacity value. It takes a long time to run each charge/discharge cycle though. I'm getting around 3.5 hours playing movies with the backlight at full brightness and wifi active.
You must log in or register to reply here.
Share:
Facebook Twitter Reddit Email Link
Register on MacRumors! This sidebar will go away, and you'll see fewer ads.
Sign Up
Top Bottom