I've started having trouble with my trusty early 2008 3,1 MacPro, 10GB RAM dual 2.8GHz, four year old ATI Radeon HD 5870, bunch of drives. It runs the latest 10.6 version snow leopard as its the machine I use to run DVDSP, on those rare occasions I need to make a DVD. I have one 21 inch Apple monitor attached. So its not my main machine, but would like to get it going again.

It boots up fine but after running a few minutes apps won't open up (beach ball), but finder seems to be working otherwise. A few minutes later the finder stops working. I can select shutdown but nothing happens, a minute later there is no response period. I've let it set for 30 minutes and nothing. Pushing the restart button will get it going again... but with same results.

The console log does not seem to show anything interesting, there is like a 2% CPU utilization when the freeze occurs, and the temp monitor is not showing high temperatures. Fans are running as normal.

So there are a bunch of things I can try next, run a hardware test, open it up and look for fault lights, boot from a fresh install, disconnect everything, play around with RAM chips, look at the power supply, vacuum out the dust..... but I thought I'd check in here for ideas before spending a lot of time chasing my tail. .
Last edited: Sep 29, 2016

try pulling all the internal drives and then booting from the external. if one of your internals is failing, it could still have an impact even if it's not the boot volume.

I've also run into a similar issue, can't remember if it was a 1,1 or a 4,1. chased it for weeks. ended up being the logic board. sad day as I've had to put down so few of these over the years.
C

How did you tell it was a motherboard problem?

I've pulled drives and RAM, installed a fresh OS on a new drive, and eventually end up in same place. I haven't fiddled with the video card as I don't have another one to swap out. On the fresh install it doesn't seem to recognize the card's capabilities, but it beach balls in 10 minutes anyway. For a few minutes after the beach ball starts, the finder seems to work in that I can close and open windows, pull down menus, just nothing happens otherwise, i.e. apps won't open.

ColdCase said:
So there are a bunch of things I can try next... disconnect everything, play around with RAM chips, look at the power supply, vacuum out the dust..... but I thought I'd check in here for ideas before spending a lot of time chasing my tail. .
Click to expand...

If you would have done this when you pulled the drives and ram, the list of "what's next" would be shorter. Blow out the PS with air when you do decided to clean 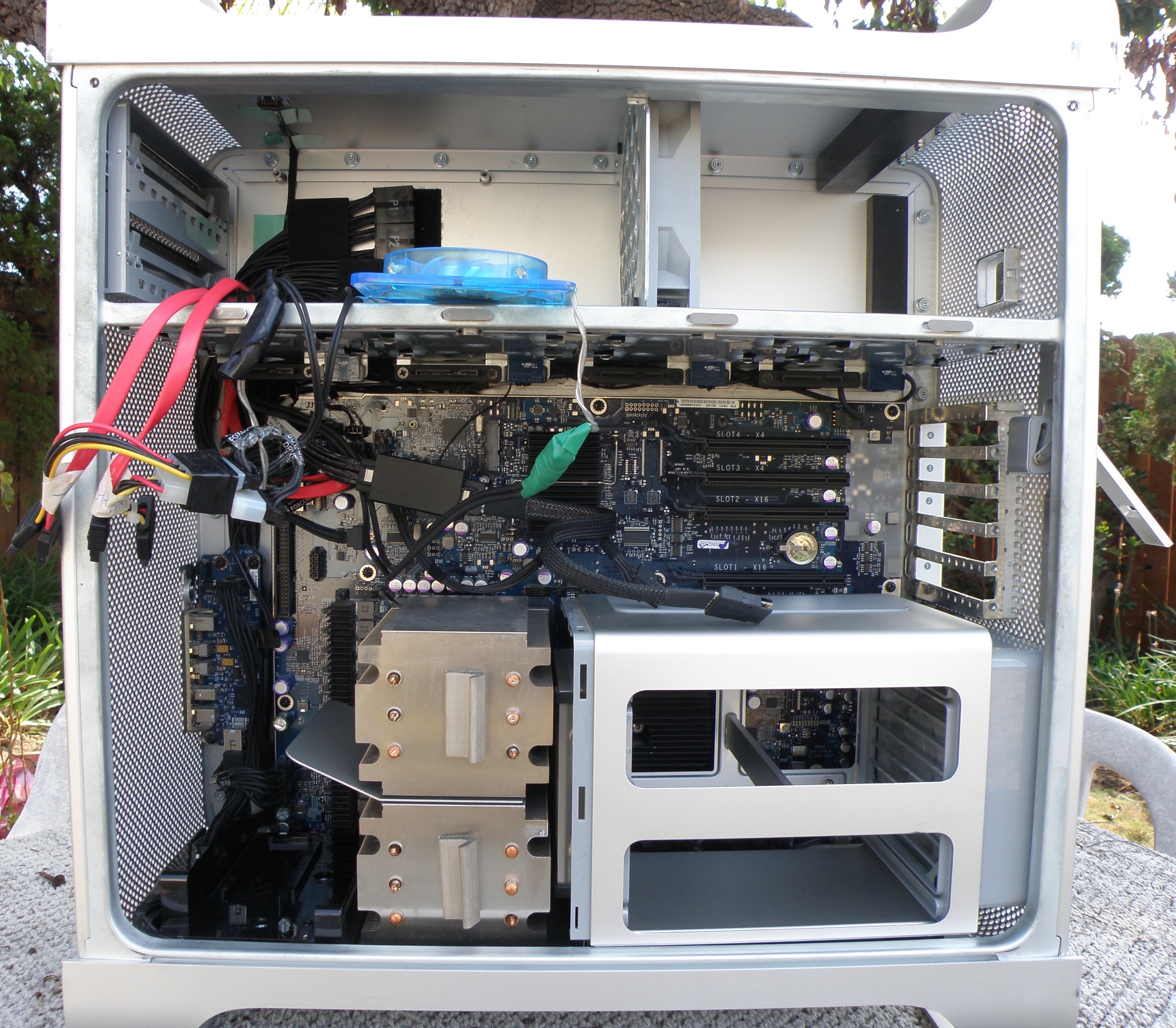 ColdCase said:
How did you tell it was a motherboard problem?
Click to expand...

I think that question was for me? It just came down to nothing left for it to be. I think we even tried a different CPU tray. we were focusing on the SATA ports/controller/bits for a while because it seemed to work if we put the boot drive sled in a different slot until we determined it was all of them. tried booting from an external. same eventual results. those being that it might seem fine after boot but would eventually slow way down until it became unusable. and the time to failure kept getting shorter and shorter.
C

Just an update. The machine doesn't completely freeze. I'm not at all familiar with the architecture but it acts as if some of the cores or one of the dual CPUs stop working after a few minutes of run time. A problem thats not detected during cold startup.

This afternoon I started up temperature monitor first thing after the boot. Temperature monitor ran for hours tracking temperatures without issue. I try to open another app and that app won't start (Like the OS trying to use another core thats bad or busy?). Temp monitor just keeps running. I can click on the different windows and they display fine, but none of the pull down menus will do anything (another CPU core?). Move the mouse over the desktop screen and it turns into a beach ball until over one of the windows. When I use the keyboard, sometimes the machine freezes all together, including temp monitor. I just have Temp Monitor lite, so it won't give me voltage and other sensor data.

I noticed initially that the CPU core temperature for some of the cores was displayed as -- (I assumed it was below sensor threshold). But after awhile all core temperatures would come and go independently (they all are less than 31C when displayed). I don't think I've ever seen the -- display. The hottest sensor reading is the RAM module at 60C.

I would think a bad video card, or disk, or power supply (unless on the margin) would freeze the entire machine, not some of it, but I dunno. It seems to operate the same regardless of the number of drives drawing power..

Perhaps interesting, but I'll be away and won't be able to look at it for a few days. Its looking more and more like a Logic Board or perhaps CPU issue. I'll have to see if I can borrow a PS from someone to double check that part. I'll look at the caps too when I get a chance.

Oh, I'm running snow leopard on it. Dunno if another OS would run any differently or provide more insight on a 3,1. Just hoping it was something relatively simple, doesn't look like it however.
C

Just to close out this thread in case anyone lands on it. It seems to be a weird software problem, perhaps some corruption. I dunno, someday I may try to figure it out.

A fresh 10.10 OS seems to be working fine. I tried to do a fresh 10.6.8 install, but for some reason its been stalling, if I recall correctly there were some with similar issues. I'm off to figure that on out

Another update. I was browsing the interweb and happened to read that Snow Leopard's automatic IPv6 setting caused weird beach-ball issues for some. So I went to the network preferences advanced TCP tab and set IPv6 from automatic to off. I have not experienced any beach-ball issues since, but its only been a day. My head must have been in the sand that I missed that gem. Apparently it may also affect Yosemite on a 2008 Mac Pro, but to a much lesser extent.