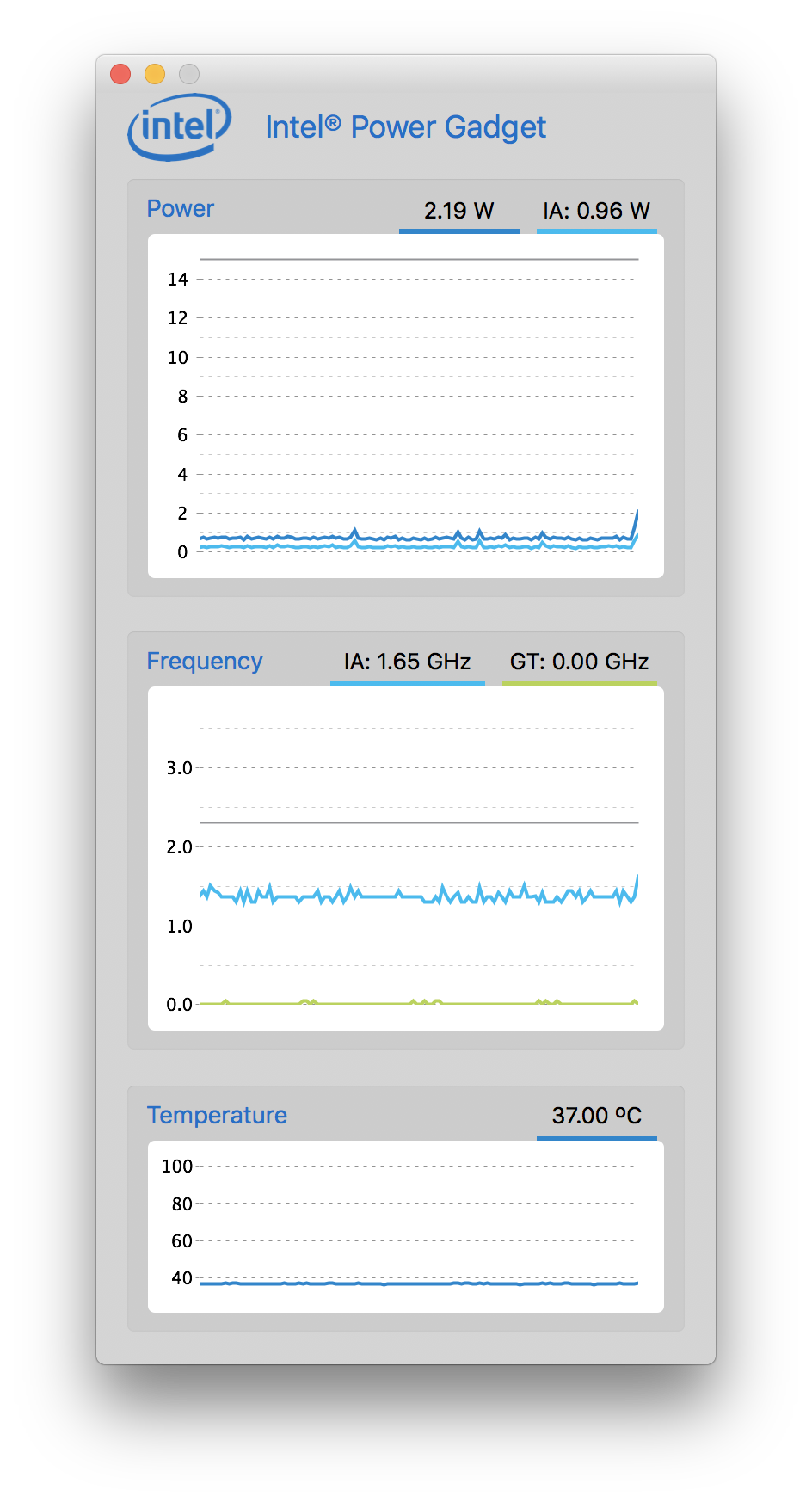 Idle to start of task: 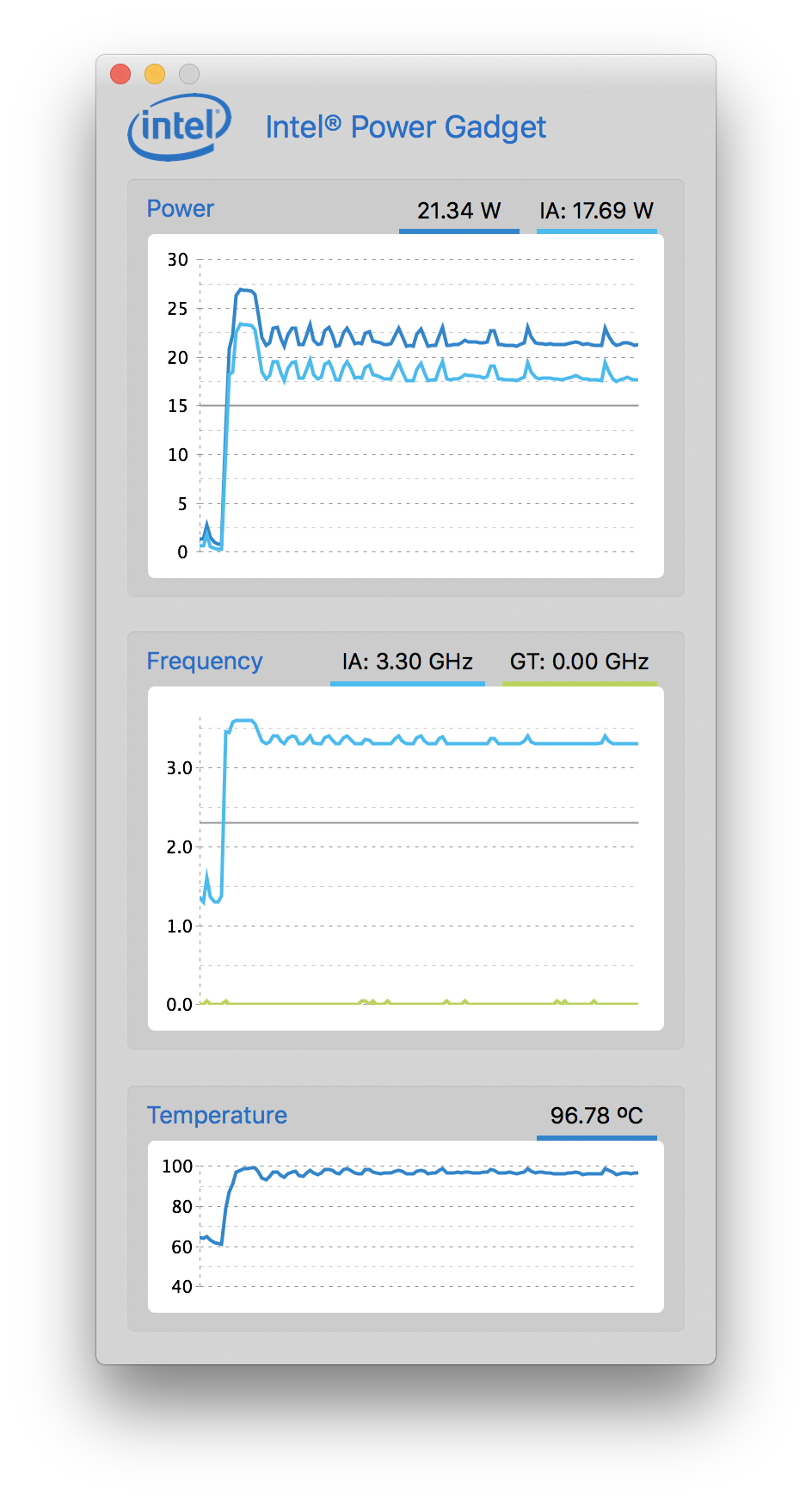 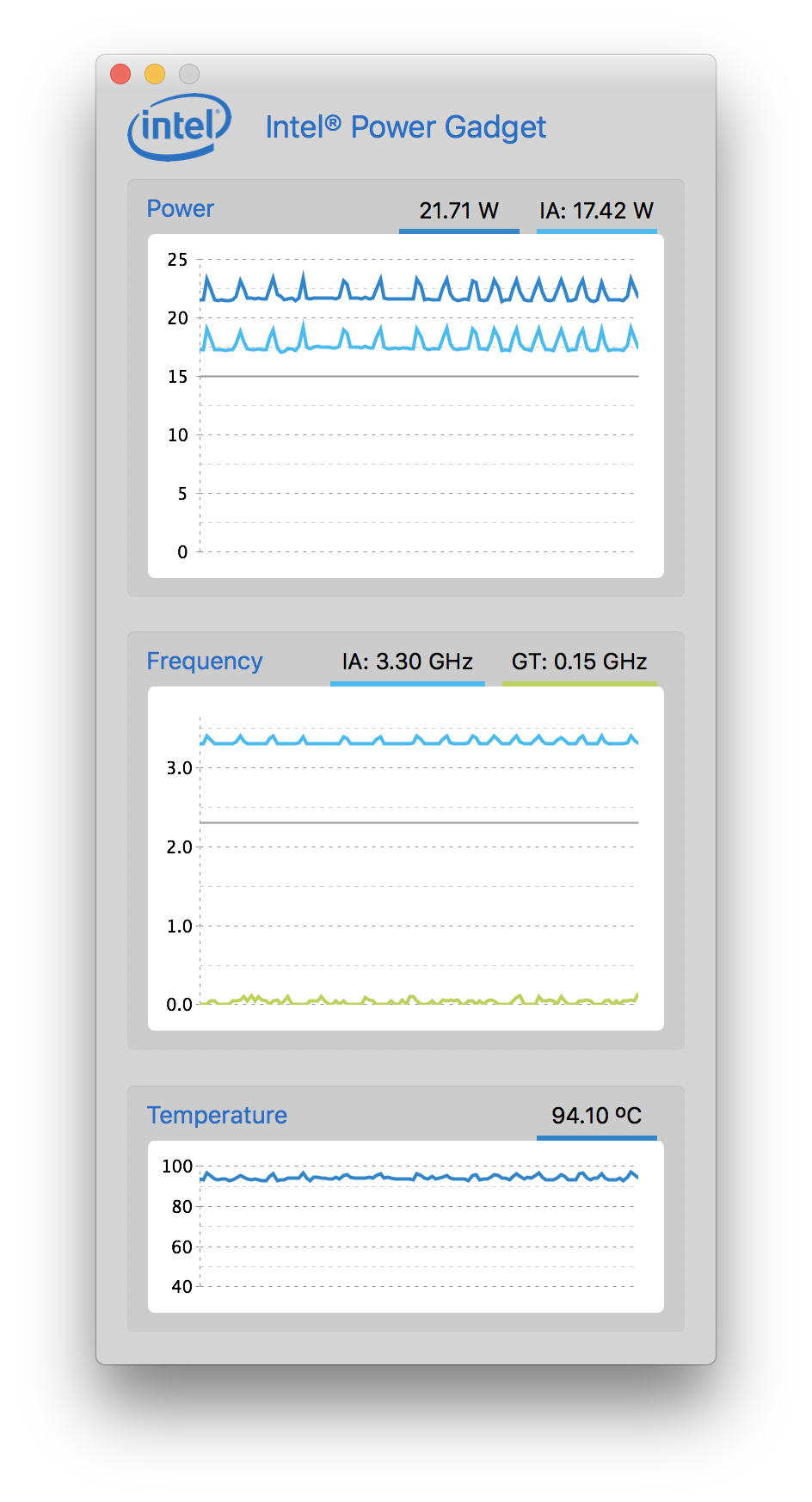 HiRez said:
Got my 13" non-touch bar 2.3 / 16 GB RAM / 512 GB SSD yesterday. I'll update with more stuff as I can, but initial Geekbench results are 4485 single core / 9501 multi core / 29528 compute. That's with some extensions running even (iStatMenus, Dropbox, iCloud Drive, Adobe updater, Google Drive), but I waited until the CPU died down to < 3%. There's a few things I don't like, such as both USB-C ports being on the same side, but overall, loving it so far.
Click to expand...

See graphs above. It jumps to its 3.6 GHz turbo speed under max load, but then almost immediately throttles down to 3.3 GHz, where it appears to stay pretty much indefinitely (I kept it loaded for about 45 minutes and it never changed). I don't really have anything to test what happens when both the CPU and the GPU are loaded at the same time, my tests were pretty much pure CPU load only. Internal temps ranged from about 37°C idle to 96°C under full load. Surface got warm but not painfully so. Fan did spin up and make noise, but not too bad (quieter than my 2011 MBA).
Reactions: asoksevil
D

Its weird that you're idle power is so high. I have the 3,1ghz TB model and this is my idle power and after 30 minutes of 100%CPU.

dof250 said:
Its weird that you're idle power is so high.
Click to expand...

I think that's just a glitch. If you look at the end of the graph there's a little spike right when I did the screen grab. For the whole graph area it's very similar to yours, about 1.3 GHz and < 1W.
D

HiRez said:
I think that's just a glitch. If you look at the end of the graph there's a little spike right when I did the screen grab. For the whole graph area it's very similar to yours, about 1.3 GHz and < 1W.
Click to expand...

Yeah I see Well this shows the load wattage difference. The 13"TB model keeps its turbo frequency indefinitely but the nTB needs to throttle. Still its only a 200mhz difference. I don't think it would me noticeable

You don't know how thankful I am for those tests. That shows indeed that a 15W low consumption CPU cannot stay at 3.6GHz because it is too much. On the other hand 3.3GHz is a good mark, and assures not too much heat and reasonable battery life.

I would like to compare this results with the 2016 MacBook Pro 2.0GHz laptop, it would be interesting.

On the other hand, I have a few test with the 13" 2015 MacBook Pro unit I purchased earlier this month (wich I finally returned). I will update this post with those graphs.
Reactions: ekuLoN
J

so is it a big difference for these two CPU?

jeff107 said:
so is it a big difference for these two CPU?

I am now lokking for a macbook pro tb/ntb for using Lightroom
Click to expand...

In short bursts the nTB could be a little bit faster because of the higher turbo, but on longer loads the TB model will be faster. because it stays on 3,5Ghz longer. Also the GPU off the TB model is a bit faster.
J

the i7 nTB seams a beast too.
A

jgbr said:
the i7 nTB seams a beast too.
Click to expand...

Geekbench results weren't that different but could it be more noticeable on other more taxing benchmarks that have a sustained test for 30 minutes or more?
J