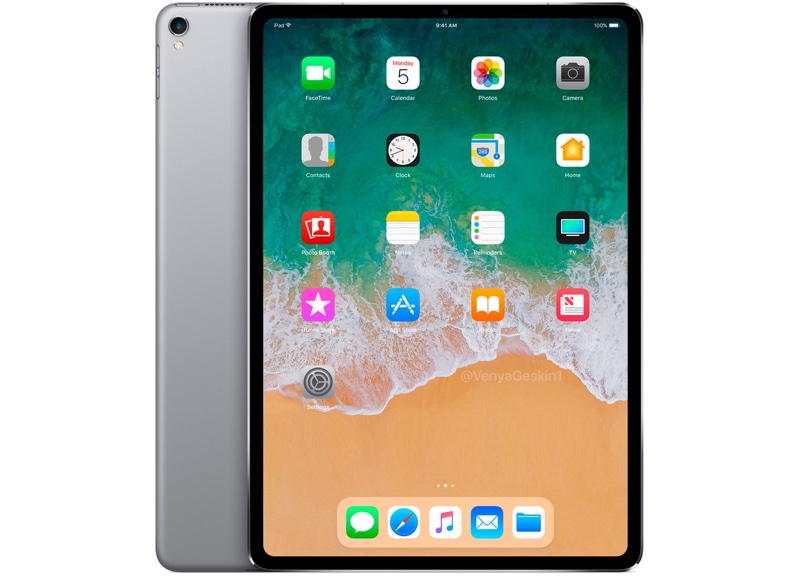 Like the A11 Bionic chip in the latest iPhone models, which is built on a 10nm process, the A11X chip will reportedly feature TSMC's integrated fan-out wafer level packaging, or InFO WLP for short.

The chip will also presumably include a next-generation M11 coprocessor and neural engine for artificial intelligence tasks, such as processing facial recognition given rumors about Face ID on 2018 iPad Pro models.

Our own Chris Jenkins provided an in-depth look at the architecture of Apple's A11 Bionic chip. He also highlighted details about TSMC's improved 7nm process and advanced InFO packaging process for 2018.

In addition to gaining Face ID, next-generation iPad Pro models are expected to have an iPhone X form factor with slimmer bezels and no Home button. However, the tablets will reportedly continue to have LCD displays due to yield rates.

Where exactly are you supposed to grip that rendered iPad?
Reactions: MikaLoop, LarryC, ShaunAFC3 and 34 others
Comment

eight cores will likely NOT produce performance improvements in most real-world scenarios, actually. Most applications cannot take advantage of that many cores.
Reactions: ShaunAFC3, iPadCary, mburkhard and 4 others
Comment

I will upgrade my Air for that.
Reactions: heathpitts, ShaunAFC3, iPadCary and 8 others
Comment

Markoth said:
eight cores will likely NOT produce performance improvements in most real-world scenarios, actually. Most applications cannot take advantage of that many cores.
Click to expand...

I know "more cores, more speed" looks great in marketing, but the reality is that precious few apps (and use cases) require it, and there's a tax to pay on mobile devices in terms of battery life.

That being said, Face ID is pretty much a given, and shrinking bezels is awesome. I doubt we'll see OLED screens this go around though.
Reactions: PickUrPoison, ShaunAFC3 and mgauss7
Comment

I understand technology moving forward, but my 9.7" iPad Pro is plenty fast enough....
Reactions: MikaLoop, LarryC, ShaunAFC3 and 3 others
Comment

Getting ever closer to the switchover from Intel to the A-series chips I see
Reactions: ShaunAFC3, iPadCary, nekonokami and 10 others
Comment

My first-gen iPad Pro renders 1080p footage faster than real time in iMovie, so it would be interesting to see how this performs for 4K. I would also appreciate a battery bump from the efficiency cores, since I kill my iPad almost every day (with about 10 hours of use).
Reactions: ShaunAFC3 and 6803390
Comment

Looking forward to my next iPad Pro upgrade .

I still have and like my late 2015 15” rMBP, however my 10.5 iPad Pro has mostly replaced it at this point. Now that I have found good video and photo editing tools, Multi-tasking is better, and I have native file access to iCloud and Drive, I am having little need for my laptop.

In some ways, the iPad Pro has become the touchscreen Mac I have wanted for years.
Reactions: Spizike9, ShaunAFC3, Firelock and 14 others
Comment

Does the notch come as an add-on dongle?
Reactions: Spizike9, ShaunAFC3, kht410 and 25 others
Comment
D

It would be really incredible to see those bionic processors in iPad Pro. The possibilities for developers would be literally endless.
Reactions: ShaunAFC3, iPadCary, nekonokami and 1 other person
Comment

What is the best guess as to when these will be out?
Reactions: ShaunAFC3
Comment

Won't they make it out of glass (front and back) so you can see through it
Reactions: ShaunAFC3
Comment
M

More powerful chips are nice. But many iPad Pro users are asking for other features to make iPads more versatile….. like say…. an SDXC card slot?
Reactions: LarryC, mburkhard, 6803390 and 3 others
Comment

Thank goodness I didn’t buy a new iPad this year next year I’m upgrading to this one
Reactions: bmw0209, ShaunAFC3, Internet Enzyme and 6 others
Comment
M

Koodauw said:
What is the best guess as to when these will be out?
Click to expand...

Scottsoapbox said:
Where exactly are you supposed to grip that rendered iPad?
Click to expand...

Same way as the iPhone 10, gripping the sides.
Reactions: ShaunAFC3, InfoTime, Lazy and 2 others
Comment

I think Apple will add a notch to the iPad so their devices have a family resemblance. If the notch made the iPhone screen better I think it would do the same for the iPad.
Reactions: ShaunAFC3 and Mc0
Comment

Solomani said:
More powerful chips are nice. But many iPad Pro users are asking for other features to make iPads more versatile….. like say…. an SDXC card slot?
Click to expand...

I think "many iPad Pro users" are going to be disappointed.
Reactions: PickUrPoison, ShaunAFC3, kyjaotkb and 4 others
Comment

My 9.7in Pro is great. Doesn't need to be any faster really, but I'd upgrade for Face ID and a better Smart Keyboard.
Reactions: ShaunAFC3, Mc0 and DoctorTech
Comment