The media has got its hands on the new MacBook Air and first impressions of the notebook after a day or two of usage are largely positive.

Following in the footsteps of the 16-inch MacBook Pro, the new MacBook Air features a redesigned Magic Keyboard with scissor switches that deliver 1mm of key travel for a comfortable and stable key feel. As with the 16-inch MacBook Pro, reviews find the keyboard on the new MacBook Air to be far better than the problematic butterfly keyboard of recent years. 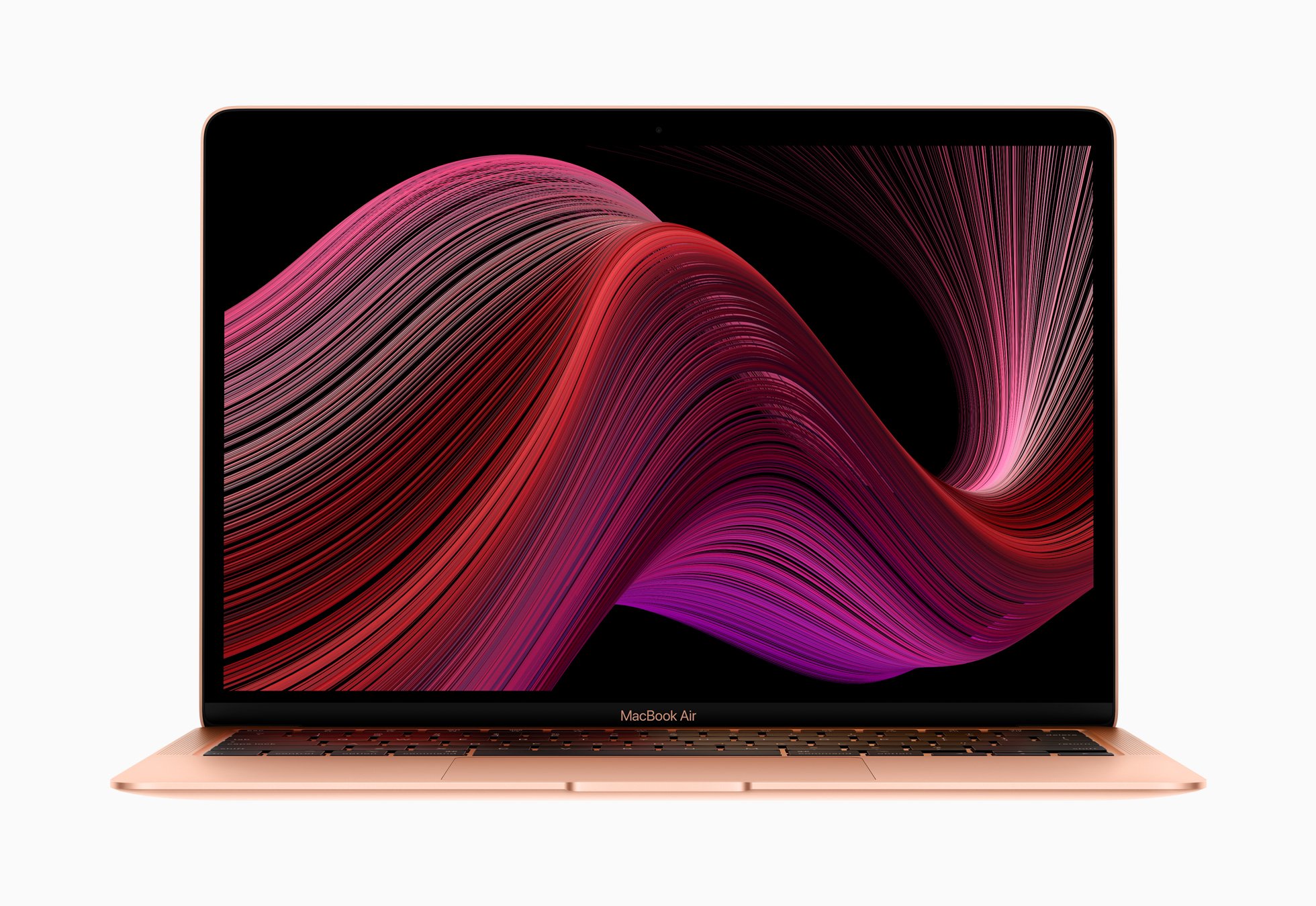 Unlike other iterative attempts to update the butterfly mechanism, the move back to a scissor switch is a marked improvement. The keys are still relatively soft compared to other systems, but the feel is much improved -- not to mention not as loud while typing. The feeling here is pretty similar to what you get with Apple's Bluetooth Magic Keyboard peripheral. Honestly, that makes it a valuable upgrade in and of itself.
Click to expand...

CNBC's Todd Haselton said "I'm pleased to report that the new keyboard is a vast improvement."

Engadget's Dana Wollman went as far as putting "buy it for the keyboard" in the title of her piece.

Apple significantly redesigned the MacBook Air in 2018, but it also increased the base price of the notebook from $999 to $1,199. Fortunately, the 2020 base model not only starts at $999 again, but also comes with a doubled 256GB of storage. Writing for Six Colors, Jason Snell said this price "finally sets the bar at the right place."

Still, many reviews recommend spending an extra $100 to upgrade to a 1.1GHz quad-core Core i5 chip -- the first quad-core MacBook Air configuration ever.

One criticism that Haselton offered is that the new MacBook Air continues to have a 720p webcam, with many customers wishing that Apple would offer a 1080p front-facing FaceTime camera on its notebooks.

Make no mistake. The current MacBook Air and its value per $, is in the best shape since Haswell refresh in 2013.
Reactions: Tekguy0, martyjmclean, niji and 34 others

Great value again at $999 ... now make that screen touchable/detachable and I will have a combo laptop / "iPad".
Reactions: Glideslope, tongxinshe, bluespark and 1 other person

No shots of the internals? I'm interested to see if they keep their "indirect active cooling" solution like on the 2018. Assuming they're using an i5-1035G4, that's got a base TDP of 15W... Much higher than the 7W Y-Series on the previous gen.
Reactions: llllllllll, Lucas284, MakeAppleAwesomeAgain and 2 others

Why isn't it just called "Functional Keyboard"?
Reactions: dhp, Ghost31, sideshowuniqueuser and 2 others

I ordered a base model 2020 MBA for my wife yesterday to replace her early 2015 MBA. She mainly uses it for web surfing, email, and writing letters in Microsoft Word. I agree with the earlier comments in this thread, I think Apple just hit home run with the value / $ for this model.
Reactions: niji, rdy0329, Mr. Awesome and 3 others
Z

Core i5 Geekbench scores has an excellent single-core score - 1192, which put it at second place behind the Core i9-9900K AMD the multi-core score of 3238 puts the Core i5 in the hunt with 2015, 2016 and 2017 15” MacBook Pros, the 2018 Core i3 Mac mini and the 4-core and 6-core 2013 Mac Pro. It will be interesting to see how the Core i7 does, but I suspect it won’t be beyond a 5%-7% increase as the clock speed (base and turbo) of the i7 really isn’t that much higher than the Core i5. Overall, this is a huge update over the previous 2018/2019 MacBook Air. Looking forward to seeing one in person, someday. Kudos to Apple, they appear to now have the MacBook Air on the right side of the value equation.
Reactions: philryan, Oblivious.Robot, DoctorTech and 10 others

Too, as noted by Anandtech, the new MacBook Air also has faster RAM.
Reactions: martyjmclean, Benjamin Disapfectation, Rodney Dangerfield and 1 other person

AxiomaticRubric said:
No mention of Wifi 5 in a Wifi 6 world?
Click to expand...

Can you explain what benefits the average user would see from this?
Reactions: Tekguy0, rdy0329, Palliser and 7 others
Z

NOTNlCE said:
No shots of the internals? I'm interested to see if they keep their "indirect active cooling" solution like on the 2018. Assuming they're using an i5-1035G4, that's got a base TDP of 15W... Much higher than the 7W Y-Series on the previous gen.
Click to expand...

@MakeAppleAwesomeAgain thinks they TDP-Upped the Core i5-1030G7 to 1.1GHz...I haven’t watched all the videos to see if a one has disclosed the CPUs that are being used.
A

I think calling the new keyboard magical because this one actually works is letting Apple’s marketing department get a little carried away.
Reactions: Darth Tulhu, Tekguy0, lugworm and 24 others
A

I know honestly this is so far the most exciting thing so far this year. And I was happy when I saw the specs.
Reactions: bsamcash
C

Very solid upgrade and good value for price. Can finally recommend this to friends and family. Getting a laptop under $1000 and not capping it at 128GB is huge. This along with the base spec updates to the Mac Mini, iPad Pro, and MBP 16 last year is a positive trend.
Reactions: FrankCataldi14, Villarrealadrian and Spungoflex
N

And I still cant decide base model/base+upg cpu/base+16gb of ram or pricier i5+16ram+256ssd
i'd like to keep it for as long as possible, but it's gonna be my first macbook and i dont know what i need

ani4ani said:
I think calling the new keyboard magical because this one actually works is letting Apple’s marketing department get a little carried away.
Click to expand...

It's Apple's brand name for their keyboard. The external Magic Keyboard was released alongside the Magic Mouse 2 and Magic Trackpad 2 in 2015. They just incorporated the same design and brand to the notebook line.

In other words - they already had a very good keyboard all along. They tried, and failed to innovate on their MacBook line and had to pivot back to what worked.
Reactions: RyanXM, martyjmclean, llllllllll and 2 others

I am interested in this version which looks like a big improvement over the previous 2 releases. i5 quad core, 16 GB RAM and 256 GB storage for $1299.
Reactions: MikeSmoke and Spungoflex

calzon65 said:
Great value again at $999 ... now make that screen touchable/detachable and I will have a combo laptop / "iPad".
Click to expand...

In a few months, you will be able to purchase a Magic Keyboard with built-in track pad for your iPad and then you would have your combo laptop/iPad.
Reactions: Darth Tulhu, jjrtiger, martyjmclean and 3 others

calzon65 said:
Great value again at $999 ... now make that screen touchable/detachable and I will have a combo laptop / "iPad".
Click to expand...

They literally just released that with the new iPad Pro and keyboard with trackpad. Granted together makes it more expensive than the MacBook Air.
Reactions: Darth Tulhu, Tekguy0, bwintx and 3 others
S

Anyone seen a review with actual work being done? They only say it's good for web browser, I can't believe it can't do more than that.

PatriotInvasion said:
Can you explain what benefits the average user would see from this?
Click to expand...

WiFi 6 isn't just about speed. It helps in congested areas, has better range, and more throughput. I would suggest that the average user could benefit from WiFi that is better in every way. It will take time for routers to be replaced, but many people use their laptops for years and years.
Reactions: martyjmclean, Benjamin Disapfectation, MartL and 8 others

I was so close to buying the 2019 model a few months ago. So glad I waited for this one.
I can finally retire this 2010 MBP, lol
Reactions: Spungoflex

TheWatchfulOne said:
In a few months, you will be able to purchase a Magic Keyboard with built-in track pad for your iPad and then you would have your combo laptop/iPad.
Click to expand...

IOS as a replacement for an operating system like MacOS is ridiculous.
Reactions: martyjmclean, derekamoss, sideshowuniqueuser and 6 others

good value and that keyboard is great
Reactions: ascender
S

This might overtake the 4K iMac as the best value in Apple’s lineup.

I’ve been a bit critic of their pricing, but this and the bump to 256GB for the Mini are both great.
Reactions: philryan, martyjmclean, Salaryman Ryan and 3 others
You must log in or register to reply here.
Share:
Facebook Twitter Reddit Email Link
Register on MacRumors! This sidebar will go away, and you'll see fewer ads.
Sign Up
Top Bottom