The TAM has always fascinated me, (and I'm sure I'm not the only one).
A few days ago I was talking to a retired guy who said he had one. Asked whether he might be interested in selling it, I was surprised to get a positive reply. Even more surprising was the fact he lived within 20mins from me. So today with nothing to loose - and as I'd never seen one 'for real' - I took a drive out to visit him.
It had been boxed up in his garage (not with the original box unfortunately) for the last 14 years, and I was told it had been a gift, and he'd used it for no more than 4 years. Since then unused. He'd connected everything up yesterday, and confirmed everything was working well.
Today was the 2nd power-up in many years. All the accessories were available, keyboard/trackpad, subwoofer & power supply, a superbly presented manual, original booklet with all CD's, and a separate modem.
I must confess, although this unit looked in excellent condition cosmetically, to my great surprise the design didn't 'blow me away'. I'd seen many glossy photos, and videos, but 'in the metal' it was somewhat of a slight disappointment. And I'm still trying to figure this out!
Boot time seemed fairly long, which I guess is normal for the original OS 7.6.1. LCD image was good and clear, although the +/- luminosity control on the l/h side didn't appear to make any changes. CD flap lowered ok from front consul control, and 2 CD's played faultlessly. Speakers & subwoofer ok. I tried several track changes, and all were selected and played correctly. On completion, CD flap was opened correctly using the software eject command.
Next check I made was to see the state of the PRAM battery. I wasn't familiar with the battery installed, but guess it was original, with no signs of leakage. In fact internally the condition looked remarkably like new, barely a speck of dust on any component - including the fan and inlet - which in my experience is rare with any used equipment. I was impressed! Other than the doubt with screen luminosity control, the only other slight blemish was on each leather palm-rest - a few superficial indentations, but no puncture or tearing.
I'd set an approx budget of 1k euros. He wanted 1.4k ($1.6k). I offered 1.2k ($1350) he refused, but said he'd reserve it for me should I change my mind.
Now I have a few questions which I'd much appreciate clarification on, for those who may have one or are very familiar with the model:-
What are the most important things a prospective buyer should look out for on these TAM's?
The screen luminosity control. Is this something I should be really concerned about?
Any other known 'issues'?
To be honest the 'Finance Minister' has certainly not given the green light - I told her of my interest - and an amber flag was waved. But as that's not an absolute red, I might be able to still creep in under her radar.
A suivre........
Reactions: LightBulbFun, Gamer9430 and eyoungren

Does it have the fat and slim rear panels? The pci and comm slot riser cards and insert? The small cable cover for the rear?

I wouldn't be too concerned about the front panel switches. They connect to the logic board with ribbon cables and I have had luck with just reseating them to get things working.

Are these things really selling for that much money now? I may have to reconsider keeping mine.

Fat back with and without pci card insert. 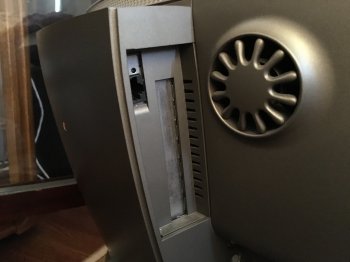 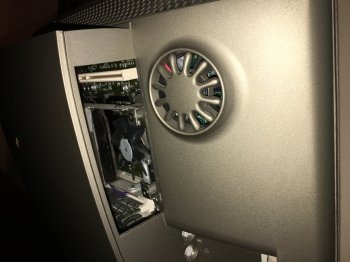 Rear panel with and without cable cover. 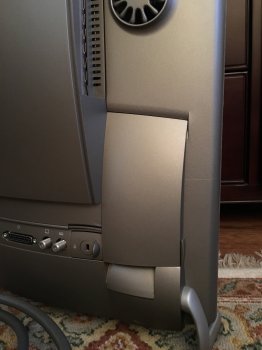 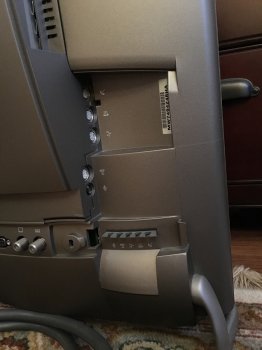 Many thanks for the feed-back. The cable cover on the rear panel is definitely present, as I removed and /re-installed it myself (no broken tabs).
Didn't see the optional fat-back cover, which may have been in a separate box. Also must check to see if FM antenna, riser card, mounting bracket shield, remote-control, pen/pencil set & pouch are all present, and test the floppy disc player. Will also take a few photos during the visit to add on follow-up post.
Of course the keyboard is damn AZERTY..........*!#*#≠!!

Thankfully the CD drive is working. That is usually the thing that fails on these. They are a beast to take apart though.

DZ/015 said:
Thankfully the CD drive is working. That is usually the thing that fails on these. They are a beast to take apart though.
Click to expand...

Do you mean the TAM itself or the CD drive? I do like a challenge though (used to pull Concorde engines apart right down to the smallest compressor & turbine blades)...... and certainly not adverse to using #0 jeweler's Phillips screwdriver.
I've looked at the iFixit TAM disassembly down to the logic board which seems very straight-forward.
I've just heard the guy doesn't have the remote control. Sad!
I'll be seeing it again tomorrow.
Last edited: May 17, 2016

The TAM is complicated but not bad to take apart, only big issue is plastics will be getting brittle. Things are going to creak then snap.

Thanks for the info about remotes. Somewhat reassuring.
Checked floppy drive for functioning, and ok. Not so good news is that he didn't have the Fat Back, riser card or insert.
Given that some original accessories are missing, I'm currently into some serious negotiating. 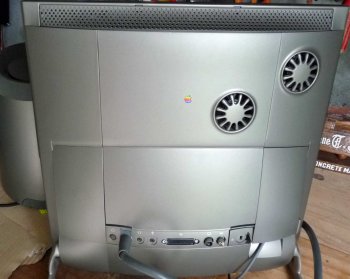 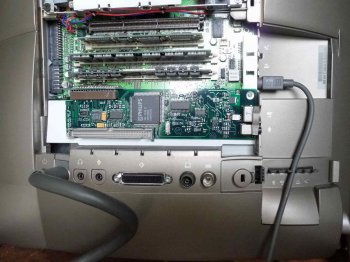 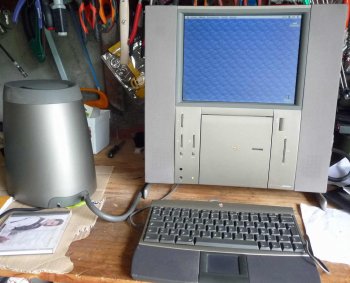 That should be way cheaper at this point. I wouldnt pay over 750 for it as as for the accessories will be alomost impossible to find separate.
You must log in or register to reply here.
Share:
Facebook Twitter Reddit Email Link
Register on MacRumors! This sidebar will go away, and you'll see fewer ads.
Sign Up
Top Bottom